Just a reminder of the annual Poppy appeal. It'll probably be more difficult to buy poppies this year so I looked online and was able to make a direct donation. I liked that the website form had a section where you could name the fallen soldier or soldiers whose memory you were donating in.
I have a fabric poppy I bought last year and will wear it.

Thanks Jane
Although there will now follow....posts by those who only ever wear white poppies, posts on the evils of the British Legion,
posts by those who think ‘war’ should never be celebrated (not that it is) and posts by those who object to everything coming to a stop for a few mins at 11a.m on the day.
I only say this because there are threads every year on this subject.
I shall do what you did and make a direct donation.

Thank you Jane. A cause dear to my heart.

I always buy direct from the RBL website each year as well as inside stores to the collectors. I hadn't even considered the possibility of collections in stores being restricted this year.

Our local Aldi had some yesterday and I got one for DH and me.

Like you Lemongrove I wonder at folks who don’t know the difference between commemoration and celebration.

This post will probably get deleted as being a personal attack on someone.....🤪

I wear a poppy out of respect for my two great uncles who I never knew because they were killed on the Somme in one case and Mesopotamia in the other.

My relatives all returned, but had brothers who didn’t survive.
I think about them all... so young in many cases.

You can go to the Royal British Legion website and download poppy posters to put in your window, blank ones for GC to colour in and of course make donations.

Both my grandfathers survived the war in France in WW1. My father survived WW2, he was a Royal Marine on the Mediterranean fleet. He was one of the men (boys aged 19 who ran up the beaches in Sicily. The three of them met at our house throughout their lives, to stand in silence together at 11 am on 11 November. We children were as silent as small children can ever be.
They commemorated friends who didn't come home and certainly never 'celebrated' wars as some who dislike Remembrance Sunday will say.
I'll make a donation on line, thanks for the reminder Jane10

I will be making my usual donation to Poppy Scotland – as in so many things Scotland is different and does its own thing.

The Scottish four-petal poppy without a leaf is different from the two-petal English one with leaf. I will not be wearing one openly. If people choose to read that as me not caring that is up to them, but they would be wrong; I'm not inclined to wear my heart on my sleeve. If for any reason I am called upon to attend a formal ceremony,I will wear intertwined red and white ceremonies.

Mine is not a service family. My father wanted to enlist in the RAF in the war – he'd been a member of the Air Defence Cadet Corps – but was not allowed to enlist as he was an essential worker, a draughtsman in a naval shipyard, so he saw out the war with the Home Guard. His older brother, my uncle Charlie, went to Burma with the Lancashire Fusiliers and was killed very soon after arriving. My father was made to feel guilty about that.

Absolutely. Will donate and wear my poppy with pride as I do every year. We support all soldiers both past and present for the sacrifices they have made. 🌺

Thanks Jane10, I will make a direct donation. I bought a lovely large Poppy brooch last year as the ones they sell are very flimsy now. 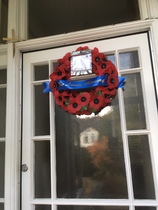 This wreath arrived today, but as our local remembrance services are not going ahead we'll simply place it on the local war memorial on the 11th November.

We planted a mulberry tree in a local park this year to mark the tenth anniversary of our son-in-law's death and it's doing very well. I love that we have a living memorial to mark his loss and hopefully when it begins to fruit the tree will attract birds (and possibly children). The RBL provided much needed guidance and legal support at the inquest and we are very happy to support them. My views on war and peace have been re-hashed annually so I'm saying no more this year.

Thank you for the link FlexibleFriend

It is a national holiday here, only the European Commission and Parliament do not get it as the Germans vetoed the request to make it inclusive with Belgian Culture.

There are normally a lot of services throughout the Country particularly in Flanders.
DBF and I went to a large one in the Tyne Cot cemetery one year and the German Ambassador was late, the service went ahead, 11.00 am is 11.00am.

I am a veteran, my husband, his two brothers and our eldest son are also veterans and we have two sons who are still serving.
I always buy from the RBL website and pop coins into collection boxes as and when I come across them.

My parents and my parents in law all served during WW2.

We Will Remember Them.

I will certainly donate and wear my poppy with pride.

I don't agree that Lemon spoilt the tread she merely pre-empted the usual few know-it-all's who like to disagree and will argue with themselves in the mirror.

And apart from that lemons post is not at all an accurate statement on the position of those who may have objections to some aspects of how war and conflict is remembered. It was a shallow caricature imo.

Just received this from a friend.