And what of Oprah herself? What do we know (or think) about her? 🤔 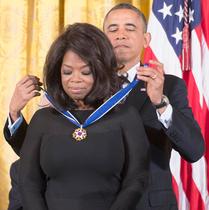 To be honest I didn’t know this much.

(Quoted from the Sunday Telegraph today).

Yet part of Winfrey’s mass appeal is that she walks the walk, her dramatic rags-to-self-made-billions the stuff of distinctly American fairy tales. Born into rural poverty in Mississippi to a teenage single mother, she lived with her grandmother until the age of six, was raped by multiple family members and got pregnant at 14 as a result of sexual abuse, only for her baby to die soon after birth.

At school, however, she flourished, and won a scholarship to Tennessee State University. At 19, she dropped out of her degree when she was offered a job as the youngest, and first black female, news anchor at Nashville’s WLAC-TV. Her emotional style, however, did not go down well on a straight news programme and she was transferred to an ailing daytime chat show, People Are Talking, in 1978. When in 1984 she relocated to Chicago, to take over a morning chat show, its name was quickly changed from AM Chicago to The Oprah Winfrey Show. Oprah had found her “alignment”.

As any good interviewer knows, the best way to elicit a confession is to offer one of your own. The British photographer and writer Carinthia West, who first met Winfrey on the set of the 1985 film The Color Purple the year after her move to Chicago, believes the Oprah effect stems from exactly this: her own willingness to show the uncomfortable, ugly side, on everything from her sexual abuse to her struggles with her weight.

‘Though she has huge wealth and power, she’s still very much that down-home girl’
“I think of her wheeling that 67lb of fat onstage [in 1988, to visually represent the weight she had recently lost] and I can’t think of anyone else who would be prepared to be that open,” says West.

When she returned to the US to interview Winfrey in the early 1990s, by which time the chat show host was world famous, West was “welcomed with open arms”.

“Though she has huge wealth and power now, she’s still very much that down-home girl,” says West. “She was seriously hurt in her own life, so she’s attracted to other people who, rightly or wrongly, feel they have been hurt in their own.”

I started to take notice of Oprah in 2002 when she set up her Leadership Academy for girls in South Africa.

People who think she’s the female equivalent of Jerry Springer might be in for a surprise when they see her interviewing technique. She’s nobody’s fool.

Really interesting Urms, I knew some of that but nothing like so much detail. Thankyou.

"The girl done good " as quoted on one of Amy Winehouse's albums.

An interesting article Urms, I didn’t know much about Oprah, only saw a clip of Tom Cruise on the couch a long time ago. Was that even the Oprah Winfrey couch?
I guess we’ll know a whole lot more about her interviewing technique tomorrow.
Got the Baileys and the chocolate mints in, not much call for popcorn in the Norder household.

Apparently there is a belief doing the rounds that Meghan will have told Oprah what questions to ask. Anyone who believes that doesn't know much about Oprah, I'd guess.

I know little or nothing of her beyond the fact that she has an eponymous programme (and I am even sure of that) and interviews people on it and I am so uninterested in her that I cannot be bothered to google her name and find out anything about her.

Shouldn't this be a lesson that after an horrendous start in life you can still rise above it by working/ studying hard and achieving what you were determined to set out to do without outside interference ?

A far cry from the pair of whingers who she'll be interviewing who haven't got a clue what sort of lives some people have had and are having. The pair of them are damn lucky to be in the position that they're in and should be thankful that it doesn't include hard graft and worry to get there. They couldn't work in convulsions !

I know little or nothing of her beyond the fact that she has an eponymous programme (and I am even sure of that) and interviews people on it and I am so uninterested in her that I cannot be bothered to google her name and find out anything about her.

But reading what Urmstongran posted is surely worthy of a few minutes attention?

This is my first proper M&H post!
Round of applause please!

I've always been very aware and known a lot about Oprah, being a child of the 80s. She was a big thing on Sky when it first launched.
Throughout the 80s and 90s my best and closest friend was a girl who happened to be of colour, and she paid a lot of attention to Oprah for obvious reasons.
One pertinent, and ironic, point is that Oprah is fiercely private a about her private life.
Oprah will either play Meghan like a fiddle or just go through the motions. She won't put a foot wrong.
I doubt very much if she has a great deal of respect for Meghan really.

Oprah is a master in the technique of interviewing. The Sunday Times mentioned today that she has managed to get some of the interviewees to divulge far more than maybe they expected to by just letting them keep talking. Ellen de Generes came out as a lesbian on her show. Whitney Houston admitted to taking cocaine and accused her ex husband Bobby Brown of being emotionally abusive. Tom Cruise's reputation took a battering after the jumping on the sofa debacle. Lance Armstrong's hope to rebuild his reputation through an interview with her after he admitted to using dope, whilst she remained emotionally detached, all the while showing enough empathy and skill to get him to admit to more than he had done before. That interview ended up being great success for her but not for him.

M0nica I'm really surprised by your attitude to Oprah. She really does deserve your attention (not wanting to sound patronising - she's a bloody interesting woman).

FannyCornforth
i doubt very much if she has a great deal of respect for Meghan really my thoughts exactly.
Oprah has played her, but she can’t see it.

Yes, I wonder what she does think of this entitled pair Smileless? Interesting comment.

And nail on head EV.

Meryl I remember being amused when Oprah went to the wedding.
I'm certain that she only attended to meet Her Majesty.

Thanks for your input Terribull I didn’t know some of that. We learn all the time!

Thank you for this thread Urmstongran. I knew she'd had a difficult start in life but not that it had been that bad.

I just thought it might be an interesting slant for fresh discussion Smileless.
😊

I always wondered why she didnt star in more films, I know she did some after A color Purple, but not many, I thought she was extraordinarily talented as an actress.

She hasn't had a chat show for over a decade; she was nominated for an Oscar for the Color Purple; she was the world's first black woman billionaire and the Uni of Illinois have based a course on her approach to business.

All discovered on Wikipedia, except the Color Purple bit!

I think she probably wanted to do more as a producer etc, rather than as an actor Galaxy. Just my thoughts.

Love you to bits Urms, but how did you manage to miss all of that?
(Actually 'having a life, Fanny' could perhaps be the answer

Thanks Urmstongran. She sounds quite grounded and obviously very perceptive. I've just read a few interesting pieces about her. Certainly not your average interviewer.
And she has the most wonderful rose garden (plus a golden retriever). I'm hooked!

I think OW is overly impressed by being close to royalty as evidenced by her attendance at the wedding. I think she is an intelligent interesting woman but I have my doubts over this 'show'.

Have you had anything stolen?Did you get it back?

Is the Government threatening our democracy - Part 2

Code of cooking when having guests.