Just started a thread about this, could not post it and when I went back after refreshing it had just disappeared! So let’s try again.… A few months ago I moved my bedroom downstairs so that my son and his girlfriend could have my bedroom and use their bedroom as a lounge. I invested in some French doors and 1/2 is just a window with a skylight opening and the other half is an opening door, I am a bit concerned that the spiders might find it a bit easier to get to me now that I am downstairs so I have bought some peppermint oil That is mixed with water and liberally sprayed around the curtains, I have also put some oil on a piece of cotton wool and rub that round the frame of the window. I have had encounters with spiders in the past, once felt what I thought was a moth on my face,just nodding off and brushed it off and in the morning woke up to find a big spider about 3 inches from my face, also a blockage in my shower which I removed, being very shortsighted did not realise until I got out and looked in the sink where I had thrown it that it was again a big spider! Also I now never get into my bed since on getting into bed one night turning back the duvet there was a bloody great spider galloping up the bed and disappearing down the back of the headboard so now check pillows and duvet. As it is getting cooler I am sure they will be planning their route into my bedroom…🕷🤦‍♀️🕷🤦‍♀️🕷

Do you get a lot of spiders Shinamae?. I can’t remember when I last saw one in the house. I’m visually impaired though, so they could be clog dancing in the shower tray for all I know

Do you get a lot of spiders Shinamae?. I can’t remember when I last saw one in the house. I’m visually impaired though, so they could be clog dancing in the shower tray for all I know

😂😂 Blossoming, I too am very very shortsighted so maybe just keep my glasses off but then would probably end up in A and E with something broken…😁

Blossoming They’re all at my house! 😱 I daily remove several and when it’s Spiderling Season, I literally remove 10-15 at a time. It’s a nightmare and I’ve no idea what the attraction is! I should have taken more notice of all the conkers on the windowsills when we moved here!

They just creep me out, I know they can’t help being born a spider and I would never knowingly kill a one, I will put them outside,usually in a sheltered spot if I can find one and they’re not trying to run up my arm!!! ….🥴 when I had the bedroom upstairs I did used to put them in the plastic jug and then assist them in abseiling out of the bathroom window……

Actually I will go on Amazon now and get a couple of spider repellent the plug-in ones have you any recommendations? Are used to have a couple of years ago but completely forgot about them so thank you for the reminder ..

When I was still a child I had a fear of spiders. But at the same time I admired their biology. And ability to trap flies, mosquitos etc,
So started to catch them and put them in matchboxes. Later release them into the wild.
I became quite fond of them.

“Will you come into my parlour said a spider to the fly? “….Have you ever watched a spider spinning it’s web and later on trapping a fly? I have - it’s fascinating !!!!!!

I'm afraid I have never found a reliable method for keeping them out. I've tried most things. Now I use a glass and an envelope and manage to chuck them out that way. If they are very large they may get a Dyson funeral but that would be a last resort.

My mum hated spiders but I don’t worry about them and they do a good job in catching flies. If I find one that’s where it shouldn’t be I just pick it up and put it out the window or door. I’ve lived in a number of houses in the country and you can get some huge buggers, especially in the bath. I don’t flush them, cover with a beaker, slide cardboard underneath and put safely in the garden. My kids hate them, not sure what I’ve done for them to be like that but I soon come to the rescue. Same with daddy long legs, catch and remove.
I can understand people being scared of them. 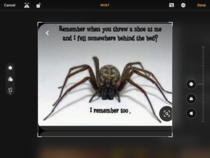 I think this is the one that went down my headboard!!..I didn’t throw a shoe at it I just jumped on top of the wardrobe!! 🤦‍♀️🤦‍♀️

Better than a workout at the gym!!.. always do it when going to put the washing out, I did start walking around with a big mop held in front of me but then I forget to do that…😂

I once woke up very thirsty and, half asleep, reached for the glass of water beside my bed. The glass was in my mouth before I noticed the huge spider at the bottom. In shock I dropped the glass and spider into the bed, leapt out of bed to avoid the spider, caught my foot in the sheet and ended up on my knees beside the bed with my bum in the air and one foot trapped in the sheet. I wasn't hurt but it took half the morning to get over the shock and wake up properly.

I got my first whopping big spider a couple of weeks ago. I'm afraid I resorted to vacuum cleaner method of disposal.
I hang my head in shame.😔

I once woke up very thirsty and, half asleep, reached for the glass of water beside my bed. The glass was in my mouth before I noticed the huge spider at the bottom. In shock I dropped the glass and spider into the bed, leapt out of bed to avoid the spider, caught my foot in the sheet and ended up on my knees beside the bed with my bum in the air and one foot trapped in the sheet. I wasn't hurt but it took half the morning to get over the shock and wake up properly.

SueDonim I think he went in the washing machine with the wet sheets. To be honest I thought it was dead, but I don't know now. Someone told me spiders can live in water for a certain time. I got distracted from the spider by the wet mattress.

I’m not sure I’d ever recover from an experience like that!

Shina You will have to go and live in your Summerhouse!😄
Although.....
Almost Autumn and spider mating time so they’ll be around everywhere ( shudder.) We usually get the thin leggy ones around all year, but it’s the hairy hunting spiders I dislike that gallop at top speed.

I think they will probably be more prevalent in the summer house Lemongrove🤦‍♀️🥴 I have just ordered two ultrasonic pest repellents one for the summerhouse and one for my bedroom although my bedroom is quite small and I’m not sure what good it’s going to be because it will be plugged into the wall which is only about 6 inches away from my bed!,so don’t think that’s going to really work might have to plug it into my lounge socket…. I might have to invest in a mosquito net I think…🤓

I think they probably can live in water for a while.

There have been countless occasions over the years when I have flushed a spider down the bath plug hole only for it to reappear the next day.
It doesn’t seem to matter how much water I use to flush it away, Incy Wincy always ends up back in the bath.

We are also coming up to the daddy long legs season. Another pet hate of mine!

Oh my, Shinamae, your post made me shudder - and laugh, When I was a child there was a huge glass ashtray in the lounge and I used to catch spiders under it and just watch them for a while. I didn’t really like them but found them fascinating. Now we do get the occasional one in various places in the house. It’s the huge house spiders that make me scream and pull my legs up onto my chair 😱. They just seem to appear from nowhere in the middle of the lounge floor. However as I’m the only brave one in the house, I then run for my spider catcher - that’s a lid from a spray can and a piece of card. He’s then taken outside with a warning not to return 😂. If found upstairs in a bedroom, they go for “the long drop”. I used to feel bad about that but when they land, they run, so they seem to survive. I do open windows and clean round the edges. There are often spider nests which would hatch lots of spiderlings if left. Last year, my daughter moved flat from the 2nd floor to the ground floor in the same building and she can’t believe how many she now gets and she’s terrified of them! She’s hoping to move again when she can afford it. 🕷🕷😖

I used to go spider hunting with our old tabby cat tucked under my arm. I'd prod the blighters to make them move and Smudge would polish them off. What a team! (Don't tell Chris Packham.)