Ruth Bader Ginsburg quotes altered in the name of......? 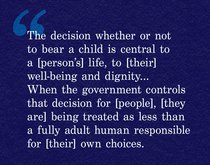 ACLU
@ACLU
With Justice Ruth Bader Ginsburg’s death, we lost a champion for abortion and gender equality. And on the anniversary of her death, the fight to protect abortion access is more urgent than ever.

And then they post a doctored version of her quote to remove any reference to a female.

Her original quote reproduced for accuracy. How insulting to laud the woman but "correct" her language. Shame on the ACLU and those that endorse these "inclusive" behaviours.

Altering history to suit a different zeitgeist is one of the hallmarks of a dictatorship, and is a close relative of disseminating fake news.

If someone used specific words, it was because those were the words that they felt applied to what they had to say. If someone else wants to say something different, they should choose their own words and write their own testimony, and not doctor an existing statement to give a false impression.

If someone used specific words, it was because those were the words that they felt applied to what they had to say.
I absolutely agree with you, Elegran. No-one should interfere with what someone else has written. For that reason, I am not happy with abridged books.

I had a similar argument with a friend who is also a church warden who altered some of the words of the traditional hymns sung at the local Remembrance service, because 'they were too martial'.

Utterly shocking.
The erasure of women.
What’s the end game?

I don't like that this has been done but at least it is made clear about the alterations.

I don't like that this has been done but at least it is made clear about the alterations.

NotSpaghetti I'll give them that but I find it really disrespectful that they feel the need to censor someone they claim to revere.

I don't see it as censorship Rosie

Why change the words then NotSpagetti?

What does censorship mean?
Censorship blocks something from being read, heard, or seen. If you've ever heard the sound of bleeping when someone is speaking on television, that's censorship. To "censor" is to review something and to choose to remove or hide parts of it that are considered unacceptable.

Yes, it is censorship. The writer of that piece wrote "women". Changing that to "people" is censoring what she wrote. As a champion for gender equality, she would not have lightly used a word that showed that she was championing women. If whoever changed the quote did not agree with Ruth Bader Ginsburg in championing women on this issue, then they should say so in their own words, not alter the words of the original quote to pass it off as though it had been written to mean what they meant instead of what Ruth Bader Ginsburg meant.

If I were to post that I like sweet and sour battered chicken, but GNHQ altered it to say that I like all Chinese food. I would be most annoyed.

I notice that the altered version does not appear to be properly in quotation marks. That is a good thing as it is not a quote. They should erase the quotation marks altogether and then also mention that it is purloined from RBG.

If they don't do that they are not proper academics.

I think it's a poor attempt at keeping what she said and "updating" it. Taking the flavour of it. I don't believe it's censorship for this reason.
I do think it reads very badly and isn't at all persuasive as the original was.

Re they are not proper academics, I don't think the ACLU are academics at all Baggs to be honest. I suppose some members will be though.

Those who censor usually think that they are updating something which was acceptable in the past, but not to those reading it in the current climate. For instance, in the early nineteenth century, Dr. T. Bowdler decided to publish an edition of Shakespeare without sexual references or double-entendres, because these were unaccptable to his "modern" readers and audience. His Bowdlerised versions would not now be out of place in the People's Friend, but they are certainly not Shakespeare - they have been censored until they lost all their original nature.

The ACLU is an interesting organisation with a fascinating history. I don't think anyone's words should be altered for any reason. If they wanted to post something they could easily have done so without attributing it to Ruth Bader Ginsberg.
They have in the past supported the rights of Klu Klux Klan and off shoots of the Nazis. They claimed to be entirely based on free speech If you are interested www.mtsu.edu/first-amendment/article/1166/american-civil-liberties-union

They beieve in free speech for Nazis and Ku Klux Klan, but not for Ruth Bader Ginsburg?

Re they are not proper academics, I don't think the ACLU are academics at all Baggs to be honest. I suppose some members will be though.

Haha! Quite right. I misread it as UCLA!!

From trisher's link For example, the ACLU defended the free speech rights for the Ku Klux Klan and neo-Nazi groups although these groups’ stances on other issues conflict with those of the ACLU.
I guess Ruth Bader Ginsburg's views were just so much worse than either of those two. Incredible!

When we are talking about women's universal access to abortion I think it is very dangerous to change language, although I guess in some instances if people thought it affected men there might be more protection with regards to lawful access to safe abortions. I'm not sure if any of you have seen the article in the BBC regarding Texas/ It is petrifying (and I'm sorry I know this is off subject) it's here if you are interested

JaneJudge the situation in Texas is dreadful. Those poor girls and women. A law that doesn't even have exemptions for rape or incest for goodness sake! I saw a post someone made on another site that is so close to the truth...... " If men got pregnant abortion would be available at the local pharmacy"

Well pregnancy, childbirth and child rearing is a way of controlling women. Whether that is our own lived experience or not. If all women in all countries had access to education, contraception and healthcare including abortion, I'm sure the world would be a better place. Men are scared of how capable we are.

I apologise in advance, I'm in a dreadful mood and have a splitting headache

I apologise in advance, I'm in a dreadful mood and have a splitting headache

There is no other group where the removal of the word to describe them would be deemed appropriate behaviour.
How can they reconcile their belief in free speech with this.

suggestions for coping with dementia and husband

Christmas with the vaccine refusers??

Has Anyone's Handwriting Changed Over the Years?