Uncritical support for trans ideology is a bad idea - a calm explanation of why this is.

A 6 min video from Catherine Robillard, explaining her views.

Three activist actors who are critical of JK Rowling because she does not always agree with them have posted her family's home address on Twitter. Police Scotland are involved.

The ones who behave like this do nothing for their cause. No wonder there is so much concern and criticism about trans ideology.

I hope those involved are named and shamed at the very least Ilovecheese. Despicable.

I hoped they are penalised appropriately for this and I agree with Catherine Robillard.
Transwomen are taking away our rights as women.

Three activist actors who are critical of JK Rowling because she does not always agree with them have posted her family's home address on Twitter. Police Scotland are involved.

This goes beyond despicable, it's incitement to acts against her family. I wonder if the big brave Scottish actor who's terrified of suffragette ribbons is involved? I hope Police Scotland act as quickly to question them as they did to Marion Millar.

Just checked, no he's not one of the three. They've now taken down the photo clearly showing her address because they've "received transphobic messages" That's DARVO in action! They stalk a woman, publish her address and then play victim when they're called out for it.

Rosie51 you said just what I wanted.

Thank you for that link, FarNorth. It is indeed a calm explanation. Who is Catherine Robillard? I'm not aware of hearing of her before. She's very straightforward and I agreed with everything she says.

As for the dreadful treatment that JK Rowling has received, it is quite appalling. As you say, Smileless2012, it does nothing for the cause espoused by the perpetrators; quite the reverse.

JK Rowling's address is not exactly a secret. There's a bus stop right outside it and everyone local knows she and her family (and security staff) live there. However, this should not have been posted at all. I hope the police deal with them swiftly and thoroughly.

It doesn't matter that her address is not a secret - I live near any number of celebrities/public figures but drawing attention to the address is inviting a mob to harass her.

JKR really does suffer for her public stance on women's rights - I fear for others who don't have her wealth to protect them. 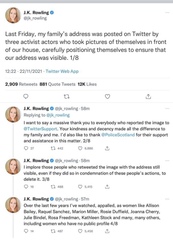 And as J. K. Rowling points out it’s not just her who is under attack. Women and their families go in fear of attack and threats.
When she says she has received enough death threats that she could paper the house with them, isn’t that shameful?
Her last point that the best way to show that trans ideology is not a threat to women is to stop harassing, stalking and threatening women, why wouldn’t anyone agree?

CR speaks perfect sense. I really hope that she doesn't pay the price for daring to speak out, and the fact that I have to hope for that speaks volumes.

We are constantly told that transpeople are the most vulnerable members of society, which this article challenges very well, but we only ever hear of violence from TRAs against women. In any case, the claim is another bit of sleight of hand by Stonewall, as unless there is a register of transpeople it is impossible to measure their experience against that of any other group in society.

I don’t know. Since their Twitter accounts have been deleted I can’t even see a picture.

Thanks, to those who've commented about the video.
I don't know who Catherine Robillard is. I spotted the video, shared by Arty Morty on twitter.
Arty usually takes part in Graham Linehan's youtube broadcasts "The Mess We're In" and GL is promoting the idea of a 'Coming out as Gender Critical' day for Dec 19th.
CR has that in the title of her video.

There's no pressure on anyone to 'come out as GC' more than they want to, as I understand it. Just encouragement to do what you can.

They are named by JKR in Mollygo’s second photo. I haven’t heard of any of them.

Catherine Robillard speaks a lot of good common sense. Thank you for sharing her views with us.

I won’t be watching it, I haven’t heard anyone speak about trans that are not biased and hypo critical of those who are heterosexual.
No doubt her loyal followers will.

She's not remotely critical of heterosexuals. Or gay people, or trans people for that matter. She just explains why she doesn't think that men can be women, and how she came to that realisation after starting as a trans ally.

This is my one comment before hiding the thread.

The thing is that I do understand these views, no matter how many times I have been told I don't.

My problem is how much of a black and white topic this has become. You must be on one side or the other. Yet, there are so many trans people in this country who are not harming anyone.

Trans people have rights. I cannot deny them that.

I cannot blame trans people for the crimes of a man masquerading as a woman.

I cannot blame trans people for the safeguarding failures of law enforcement.

I cannot blame trans people for the mistakes made fighting for equality for all, including trans people.

I can blame those who unreasonably expect an estimated 200,000 to 500,000 trans people in the UK to carry the crimes of the few.

I remember the discussions when we realised how many LGB people actually exist in the UK and the fears about them sharing bathrooms, changing rooms, prisons etc.

Those fears passed. These will too.

We will find a way to help everyone feel safe, accepted and included. It will just take time.

I won’t be watching it, I haven’t heard anyone speak about trans that are not biased and hypo critical of those who are heterosexual.
No doubt her loyal followers will.

By the way, Allsorts, although I don't make a habit of commenting of posters' use of words, on this occasion I can't resist pointing out to you that "hypocritical" (a low level of criticism) means the opposite of "hypercritical", (a high level of criticism) which I think is what you meant to say, and that while "homosexual" people have sex with people of the same sex, "heterosexual" people have sex with people of the opposite sex.
I don't think you have been listening very closely to anyone who has been speaking about transmen, transwomen, or homosexuals, whether they approved of them or had doubts about some of their campaign tactics. The video in the link would be a good place to start - she gives one of the least biased opinions I have heard.

VioletSky, yet again you criticise anyone who thinks that the "harassing, stalking and threatening" behaviour of some trans activists is disgraceful. If we think that, it does not mean that we are transphobic - we are violent-behaviour-phobic. I have known a trans woman who had fully transitioned (which involved a lot of surgery and suffering), and lived happily as a woman. She was lovely, and no threat to anyone. She has left the area now, but I'm sure would be just as horrified at the awful treatment of JK Rowling as I am.

To refuse to have my niece stay with me anymore?

Cocaine use in House of Commons

Please help me quit teaching! What home do you prefer?