Pictures and books in charity shops

It is many years since I have been in a charity shop.

I used to go to have a look at the books in those that sold books, often buying one or two.

Some, though not all, as well as books, had some pictures.

From at least the early 1970s and possibly earlier one could buy, at the shop in the gallery, reduced scale reproductions of some of the paintings in the National Gallery in London. Carefully rolled in a tube by a member of staff and then carried home by the purchaser.

Many might have been framed and displayed for many years in the purchaser's home, then, due to the owner passing away or downsizing be given to a charity shop.

I remember in those days larger branches of Boots and W H Smith would sell framed prints - not prints as in an artist's limited edition signed in pencil and numbered as, for example, 19/50, but machine printed unlimited edition reproductions of paintings, some classics, some possibly 'own label' produced for the business. I seem to remember that some large branches of W H Smith had a catalogue from which one could order a framed print of any of the pictures in the catalogue.

Then there may be pictures where someone has, as an amateur artist, produced an original painting, framed it, and displayed it at home.

So I am wondering please if pictures do arrive at charity shops these days, if so, are they accepted, do they sell well, are there people who go looking for such paintings as a historical interest, and so on?

The paintings then perhaps being displayed on another wall for many years.

Also books. I remember years ago that there used to often be in charity shops books from Everyman's Library, in their pre-war style of binding. Everyman's library, in a different binding, was available in at least the late 1950s.

In the 1960s there was what seemed a vast range of the Teach Yourself books, all hardback available in bookshops. There were a lot of ones to learn a language. Later there was a much reduced range in softback.

And Pelican books, not very expensive paperback books with a wide range of subjects widely available in bookshops.

Are these arriving in charity shops now?

There are many pictures in my local charity shops, mostly the sort you get from The Range or B&M. The framed pictures seem to sell for the frame rather than the picture.

Some time ago I was in a charity shop 300 miles from my village and saw a hand-painted picture of the church where I live. It was very good but not something I would display, I do wonder how it got there.

The majority of the pictures I have in the house are from charity shops. Most are prints but a few are original paintings. I’m always amazed how talented people are. The dearest I’ve ever paid was £10 for a very large sailing print, the majority range from £2 to £5. Nothing I own would be worth a penny on the Antiques Roadshow but they’re of value to me. Buying them is a win/win the same as donating. The charity gets cash and an item finds a new home.

If you see pictures of peoples homes in magazines or newspapers, the walls are often very bere or have one or two very large modern paintings on them.

We sometimes take a stall at antique fairs and we long ago stopped buying pictures for it, with few exceptions, they just do not sell.

MOnica the curse of the modern age is minimalism. I think it’s lovely if you have a beautiful new house with perfectly plastered and painted walls. Why would you spoil them with loads of pictures, especially when you’ve gone to the trouble of painting them with F & B ? In rickety large old ruins like the one I live in the opposite of minimalism is essential. You need as much furniture and wall decorations as you can get.

BeEmerald We have pictures stacked in a corner because we cannot find anywhere to put them, but we have a large old house full of old furniture, so the 'lots of pictures' look goes with the house and contents.

Many charity shops have loads of books, mainly paperbacks. Oxfam has dedicated bookshops. The type of books seems to vary. We are on holiday in rural Wales and there are lots of old hard bound books in the charity shops. In London the books tend to be crime or modern fiction. I have a friend who collects pictures from charity shops. I used to buy them for the frames and once discovered that I had bought a signed and numbered print by a reasonably well respected artist.

We sell lots and lots of books paperback 3 for £1 or 50p each and hardbacks £1 They are kept in author alphabetical order and the customers love that We have a wall of shelves full
We sell lots of pictures too ….prints, framed paintings, and canvasses However we do look artists up all the time and any with any value or signed go on eBay
We are very estute and every piece of brick a brac that is believed to have value us checked we do get many valuable ornaments in the donations one just sold for over £500
Likewise with books we can sell on Amazon if they have any value to them or occasionally a first edition or with the authors signature
I love the work I do it can be so exciting

I bought a book on ebay that was from Oxfam. However I have sometimes not bought a book in their shops because I thought it was overpriced.

I started a thread about a year ago about framed prints. (Ones of ‘proper’ paintings)
They used to be widely available, but not any more, sadly.

Our book club runs on finds in charity shops. Definity a win win

I agree the style is familiar.

As is the advice on diet on MissA's Diary of a Benefits Claimant.

Unquestionably.
Welcome back Elderly Person -did you manage to stay clear of Covid with your elaborate precautions?
I do hope so.

I started a thread about a year ago about framed prints. (Ones of ‘proper’ paintings)
They used to be widely available, but not any more, sadly.

I have come across a large framed print which is pretty old (as has been in someone's house for over 30 years) It is in a nice quite thick wooden frame and is a print of A J Munnings "The Horse Fair" .... is it worth anything? I was hoping before it came it was an actual painting but sadly not! 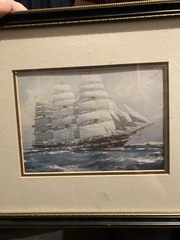 Here’s one I got this afternoon. I love prints of ships.

I've collected pre 1980 Ladybird books for around 20 years now Could always find them in charity shops. Not any longer, they are like gold dust

I've collected pre 1980 Ladybird books for around 20 years now Could always find them in charity shops. Not any longer, they are like gold dust

Same with the 'Observers Book of' series - people started cottoning on!
I have the full collection of both (apart from a couple of very early Ladybirds) EBay was a good source and, often, no dearer than the charity shops.

I’m a ‘temporarily retired’ ( due to ill health ) book dealer - I’ve been one for 42 years, you never actually retire it’s in the blood, but there was nothing I used to enjoy more than wandering around charity shops and bric a brac places hunting for book bargains - in the late 90s early 2000s everything changed with the advent of the internet. The charity shops gradually, like one of our members said earlier, became more astute and wary and all my earlier learned knowledge of books ( with a few exceptions) went out of the window, as a quick check on specialist sites on the net showed them the rental price of whatever they were looking for!
So Oxfam and others opened up their own online store and many others followed suit. Other just checked their donations and sold individual books on eBay or wherever, making a profit for their charity no doubt, but killing the enjoyment of wandering round charity shops where mostly I find just modern books and rows of pristine paperbacks ( fifty shades of grey and similar) en masse!
Great for me to buy modern novels to read but no fun at all hunting for bargains! Where are all the Everyman books, the tatty hardbacks they are donated, well if they don’t check them many are considered too old and unappealing looking to be on the shelf , so they are put in black bags and sold by weight to firms such as ‘World of Books’ ‘ Resusabook’ ‘Music Magpie’ who pay the huge sum of c. 50p a bagful!
Here in south Wales we have Goldstone Books who do the same!
So Stardreamer that’s where most of your lovely older books end up! Of course there are exceptions like car boot sales and the old smaller charity shop that doesn’tbelong To a big concern but on average that’s the answer,
I can’t speak about pictures, I see a lot of often faded pics in such places inboxes mainly sold for frames, but I would imagine anything that looks ‘tasty’ goes through a similar checking process? I know way back I used to get called into charity shops to value books...and they always got a fair price but no longer!

I used to love perusing charity shops until I had to sell and downsize and give away many of my treasured bric a brac and books.

I volunteer in the village charity shop and I also sort the books. I am afraid that older books just don't sell so they are regretably sold by the bag. It grieves me to do that but we are raising money for the village, ( all the money raised stays in the village and is used by village organisations like the swimming pool, school etc.), so anything is better than nothing. I do sell individual books to a book buying website but books have to be in good condition and have a ISBN number or they can't take them. Pictures also sell but mostly for the frames and again only the good ones sell.

Theo Oxfam book shop I volunteered for would send to pulp any books that they had multiples of - saving the ones in the best condition they were ruthless - but it is a business and customers do care more about the aesthetic appearance of things than their content especially if there are a lot of other charity shops selling them cheaper. Rarer/ lesser known works people will happily pay a bit more.
The internet has tendered encyclopaedias, and some similar reference type books useless particularly if they have been kept stored in a stinky damp shed or garage for umpteen years on end.

Donors used to get very upset and indignant about their collection of National Geographic being refused.

I agree that lately I haven’t seen any framed pictures that I like.
The frames though are worth having as there seems to be a lot in boxes in the charity shops in the last few years. I remember not being able to find any and having to pay for expensive ones in homeware shops horror !! But… fashions come around again

What brings you contentment? 🌺

Can teasing be subtle bullying?