hopefully that poor cat will get justice. 😡

It would be great if he was likely to get real punishment, but I doubt it.

I'm so glad it's been perused, though.

He needs a good kick up the backside, himself.

Followed through.
My phone refuses to recognise the word I want it to say, and I cant be bothered to argue with it.

I am suspicious that the case is only after the end of the football season, but better late than never.

I'm happy to hear that the two cats are being rheometer, hopefully they will go to loving families.
Listening to the news, l heard that he said in front of his 7 year old child that he would kill the cat.
What a truly awful individual.

Great news
Let’s hope that he gets what he deserves and that we never hear his name again.

At last it comes to court; the horrible specimen.
I am so glad to hear the cats have been rehomed, I hope they will be loved and treasured after such dreadful treatment.

I'd like to give him a taste of his own medicine.

But very happy to read online that his cats are now happy and healthy.

I don't think there's much you can do with individuals like Zouma who think animals are simply there for their use, abuse or entertainment.

I doubt he'll have a moment's remorse or self-reflection. His only concern will be how this affects his career.

Anyone who can inflict pain on a defenceless animal should, IMO, be under scrutiny. It's not a healthy mind-set.

We had a family member who used to mercilessly tease the family pet. He didn't physically harm it, but enjoyed watching its confusion and distress. He also did the same with young children (until he was stopped). He obviously got some kind of kick from his ability to cause anguish and discomfort, possibly compensating for, and stemming from, some personal inadequacy in his own make-up.

Personally, I'm in favour of people having to be licensed to own a pet - any animal. This might also cut down on the number of attacks on humans by dogs owned by a certain type of individual who understands little, and cares even less, about the breed, nature, or needs (and history) of the dogs they acquire - almost as an accessory to their lifestyle.

3 charges against him and 2 for his brother for filming the incident. This is a victory for public pressure as without such a display of outrage, I wonder if this would ever have gone to court. 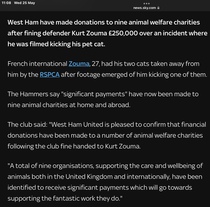 Sentencing has been adjourned until June 1st..

Fingers crossed that on 1st of June, we will be having a Celebratory Cat Party here🤞🐱 🎉

We'll have to bring plenty of

to have a proper celebration Fanny.

That is good news Shinamae, let's hope that the news of his sentence will be just as good or even better.

Message deleted by Gransnet. Here's a link to our Talk guidelines.

I would have liked to see an end (or at least a very long break) in his football career.
Take away his status and sense of entitlement.

I would also add, I want justice not revenge.

I would also add, I want justice not revenge.

You’re a better woman than I!
I’m all in for a bit of revenge!😾

But not to the extent of Shep’s idea of revenge, though, I should add

I would have liked to see an end (or at least a very long break) in his football career.
Take away his status and sense of entitlement.

Yes, I still find it remarkable that this didn’t happen!
Remember what happened to the woman who put the cat in the dustbin?
Her life was ruined; and I’m convinced that she was mentally unwell following the death of her mother

I hope I am rather better than him rafichagran.

Has anyone heard of this?

Friendship,advice and support if estrangement has affected your life.