Why would any family with children have a dog like this?? 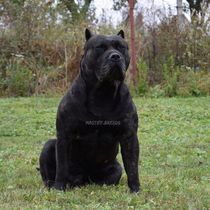 I’ll start by saying that we’re a firmly dog-loving family - we’ve had beloved dogs in the past - and dds and Gdcs have always been taught always to ask the owner first, before holding out a hand for the dog to sniff, before even thinking of touching them.

However, my Gds, nearly 6, was bitten by such a dog in a pub yesterday - having done the above and been assured that the dog was friendly - the family had their own children with them.

Thank goodness it was not serious - Gds was shocked but not really hurt. The dog gave no warning at all, and dd had believed the owners’ assurance that the dog was fine with children.

I do like to see dogs in pubs - I’d hate to see a general ban - but this has given us all a shock. As dd later said, ‘No warning - what if a huge dog like that had gone apeshit?’ 😱

It beggars belief that anyone would want such a gross creature in their family home at all, never mind with children around. What is this about? I just don't get it.

I guess there is that element of ‘ oh my dog would never etc etc’
Best safe guard is for some breeds /size of dogs to wear a muzzle when out in public.

I agree - even if the dog thought he/she was doing it's job and protecting its family. It's not a case of being friendly. Dogs are animals not humans.
The owners need to be educated. It's not the dog's fault.

Sorry, dogs especially huge ones like that, should not be allowed in family pubs. They are animals and quite frankly, I wouldn’t let my GC pet a stranger’s dog. There are so many tragic stories…

Wow, I'm very doggy but never seen one of these! Fantastic beast but not to be taken to pubs.

That would terrify me.

To be entirely fair, the owners were shocked too - let’s hope that’ll be a lesson for the future - their dog is NOT reliable with other people’s children! And very likely not with any unfamiliar adults, either.

i don't think dogs should be allowed where food is served, except perhaps outdoors.
i wouldn't go in any indoor premises where dogs were allowed.
hope the child is ok ; guess they went to get tetanus jab etc, can't be too careful with any bite, inc human, infection risk.

I would keep little ones well clear of an animal like that. It has the potential to cause huge damage within seconds.

I believe that dogs should be muzzled in public areas. It would keep everybody safe, and prevent attacks on other dogs too which happens all too often.

We were brought up never to touch someone else’s dog, whatever it’s size, ever….with or without owners permission.

Let’s never forget, when these incidents happen, it’s the dog that gets put down!

My thoughts exactly Pantglas. I wouldn’t allow a child of mine to ask to touch a strange dog, and something this size is obviously a potential danger, but then so are all dogs given the right circumstances. It’s not ok for the owners to permit the dog to be touched or to allow a child to ask to touch it - for whatever reason the dog may not want to be touched. We all have our grumpy days; would we like to be submitted to a stranger touching us? Also it’s the natural instinct of many breeds to act to protect their family from a perceived danger - you can’t attribute to a dog the ability to realise that a child is unlikely to be a danger.
No, it’s not a dog I would choose simply because I don’t know the breed. I have never chosen any pet for its looks and would never describe any dog as ‘a gross creature’. If I did have such a dog and took it into a pub where dogs are permitted I certainly wouldn’t allow a stranger to touch it.

A child would stand no chance if that dog attacked. Or an adult for that matter. If that creature came into a room where I was I would immediately leave. What is the matter with people?

It doesn’t help that the one in the picture is black. A different colour would probably look much less frightening.

Beautiful dog but hopefully the owners will be more aware of the breed of dog they have. May well be very protective of their own children but not so much with others
It’s not a breed I would choose either I believe it is a banned bread in certain countries and a dog for an experienced owner. I believe the correct name for the breed is Presa Canarios

Ditto! I love dogs but I’d give that one a wide berth!

I was thinking exactly the same!!

Me too, and I love dogs!
First thought was Hound Of The Baskervilles!

Yes something from a horror film.