Robot mowers. Does anyone have one?

Mr P is finding the grass cutting a bit of a chore these days and is interested in getting one of these robot mowers. We are both clueless as to how it all works. Any advice will be most welcome.

No, but a friend does. They just set it away and it bumbles around just like a robot vacuum cleaner.

Thanks, that sounds encouraging. My D and DIL have those robot vacuums and they like them.

We have one that doesn’t need wires around the edge of the lawn. It wanders around most days as the lawn is quite big. The grass looks velvety as it doesn’t cut extra short. We like it as there is no effort involved.
,

I have one and it is the best thing I ever bought. The grass looks amazing.

We had one for 6 years whilst DH worked abroad (it packed in last summer) & it was great. Worked within a wire boundary set at the edge of the lawn, so had to be careful not to catch it when strimming the edges.
I’d definitely recommend them!

I’ve seen pictures of these and thought they would be good. Are they easy to set up? Also, how are the grass cuttings collected, they look quite small.

Friend of mine has one. He calls it his electric goat!
It does a good job of wandering around the grass keeping it tidy and it leaves his flower beds alone. The clippings are small and left on the lawn - they soon disappear.
I think it returns itself to its' charging point when the battery gets a bit low.

We have one that doesn’t need wires around the edge of the lawn. It wanders around most days as the lawn is quite big. The grass looks velvety as it doesn’t cut extra short. We like it as there is no effort involved.
,

Thank you everyone. liaise can you tell me what model you have? I like the idea of no wires. 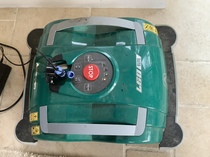 It is called Ambrogio. It was bought from John Lewis about 3 years ago. There may be newer versions by now.

Thank you. I think we are now convinced that a robot mower is just what we need.

Our mower packed up recently and in the German equivalent of Which magazine by coincidence these were tested that same month.

We were confused by the fact that they measured 40 hours to cut a lawn the size of ours. Apparently the mowers go out and do a bit then return to base to re-charge and thus only do a bit at a time, shooting out at random times to do the next bit.

The laying of boundary wires wouldn't have been such a problem for us, but we bought a conventional one in the end.

We have a Husqvarna and are very happy with it. It took a day to install the guide wires and the docking station then we downloaded the app and off it went. You can change the cutting height and the length of time it cuts and the tiny cuttings are left on the grass. It is very quiet and just gets on pootling about whatever the weather. You do have to be careful not to leave anything on the lawn it could mow over. We change the tiny blades about every four months and other than that it just needs a clean every now and then. It’s saved us hours and hours of mindlessly boring grass cutting.

Can I ask how it deals with any debris on the grass?
Yesterday a cat left the remains of a bird, feathers etc. and today there are twigs and leaves blown off the trees.

It just chops them up. It glides over larger sticks and periodically I pick them up by hand just as you would with a lawnmower.

Thank you all for your information. It has been very useful in helping us to decide.