Such a short time ago

I was trawling through some random photos on the internet intending to illustrate places my ancestors lived and came across this one dated 1970.
The children look clearly well cared for and happy, around them is squalor. It brought a tear to my eye when I realised that I would have been 21 when the photograph was taken and although I’m working class I didn’t realise people still lived in places like that.

The Glasgow overspill schemes were for folk still living in these conditions and although it gave them good housing for many it broke up the communities they grew up in.
Good communities in the main ,conditions outside looked bleak but many of the single ends and room and kitchen flats were lovely inside .
The area where I live had a massive number of new houses for the overspill folk and many who came still live in the same houses now .It was a step up from the housing schemes of Easterhouse and Drumchapel where although the houses were a good standard there was nothing else for the inhabitants who missed the cinemas and pubs or even swimming baths and libraries they had in Glasgow .Here they had everything on a smaller scale .
Talk to people who grew up in the places like the photo and they'll tell you they had fabulous ,carefree childhoods that they didn't know they were poor or disadvantaged an any way.
I suspect the parents saw it differently , is it the rose tinted specs syndrom or just being a child ?
Hopefully Glasgow learned from those mistakes and will use some of the empty commercial premises to make homes for folk who want to live in the city

Sad to say there are people who still have to live in places like that.

I agree most people seem to remember these places with fondness because of the community spirit. They were all in it together, no-one had anything so doors weren't locked. Doing the family history has revealed many families living in tiny houses or flats with 12 children (100 or more years ago). You cannot imagine how they coped. No wonder the children were kicked outside all day, there was no room for them inside.

Back in the 1960s I didn't realise people were still living in such places. Then slum clearance went on in every city and high rise flats were thought to be the answer. They had better facilities but lost the community feeling and as we know many flats became crime ridden.

They look happy enough and have the latest up to date toys. The dustbins were what everyone had in the 1960s. They are probably my age,

We lived in a house with a shared yard and outside toilets. It wasn't that unusual. We lived in small village, Any school friends of mine who had a proper bathroom lived in the council houses or were from middle class homes.

I remember when The Gorbals hit the news headlines and, even though I grew up in a small house with ypthe lavatory outside, how shocked I felt that anyone lived like that.

I can't post the photo of a young Mum pushing her baby into their condemned tenement but it looks worse than yours, Esspee
It was 1970

I remember my Dad walking me around the Salford back-to-backs in the late 60's. Now the high-rise blocks built to replace them are coming down too as the 'community' was destroyed.
Salford is a highly desirable media city now, and the docks area of Cardiff where I lived as a student is also very des res, As you say, just a short time ago.

Hi peops, need to buy a good carpet cleaner. DH is insisting in the top of the range Vax at around £300, but I do not want to spend that much at all. Can anyone recommend one that is super efficient and not so expensive as a Vax? Or maybe even a refurbished one, if anyone has bought one of those? 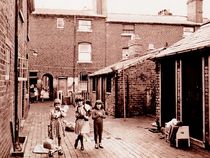 My home town. Ladywood Birmingham. Hundreds of back to backs condemned for demolition in the 1930s still being lived in in the 1960s. I was born in one of them. Two rooms upstairs and two downstairs.
Houses surrounded by heavy industry and bomb sites in the 50s and 60s.

Agree , Paddyann my maternal grandparents were very lucky and moved from Glasgow to a new scheme in the late 30s .
The lived in what was called a two apartment house.
It was wonderful, front a back green ( garden) and internal bathroom.
My gran lived there until she was 90 .
All their 4 children were born in the house and I lived there for the few years after I was born, as my father was working overseas.
Still has a big place in my heart.

My father was brought up in a Tenement ( until it was bombed)
He said he has only good memories hard-times, but the families all in same boat .
Communities came together and helped each other.
Always in and out of each others homes . Children outside playing kick the can etc

As a child I often visited with my grandparents friends and relatives and I can confirm that the insides of the Tenements are lovely, high ceilings and big windows.

The saddest places as Paddyanne says, are what was then 'new build estates' completely soulless with no communities or amenities.
I had a relative that volunteered in one such area, to help with computer literacy.
She sourced and provided donated computers.
Unfortunately she was up against drug and alcohol culture.

I to was brought up in a tenement exactly like the ones in the photos in Glasgow...I had a wonderful childhood in a 2 room and out side toilet... All the kids played in the back..We had every kind of shop your ma would need to buy her 'messages'...There was also a pub on every corner and bookies galore...When I was 12 my parents moved to a new multistory 21 floors up in one of the new soleless housing schemes Glasgow built...Mum cried every day as she hated it.. Eventually we moved back to where we came from...My mum and the rest of us were so happy to be "home"....

Hi peops, need to buy a good carpet cleaner. DH is insisting in the top of the range Vax at around £300, but I do not want to spend that much at all. Can anyone recommend one that is super efficient and not so expensive as a Vax? Or maybe even a refurbished one, if anyone has bought one of those?

Hello,
I think this needs to be a new thread. I think you've accidentally tagged it on here Bridget where it will get lost.

Some back to backs in Birmingham have been preserved by The National Trust.

When I was little in the sixties, my dad went to see the council to try to get a bit of progress in getting us out of the 2-room flat the three of us were living in. The man from the council told him nobody was living there because it had been condemned. Dad brought him round and mum gave him a cup of tea. Couple of weeks later we had a new flat with - luxury of luxuries - an indoor toilet.

It was in Scotland, but not Glasgow.

Callistemon I've seen that picture before ,I've also seen the mum post on the thread and the BABY, Peter I think, had his say.The mum was well dressed her baby immaculate even though the surroundings looked grim.She had to bump that big pram up 3 flights of stairs and down again in the morning.Baby was often left in the backcourt within sight of her window "for fresh air" .Its how many lived right up to the 1970's in Glasgow and other Scottish cities Then we got laded with Thatcher and life went downhill for smaller communities too.And many didn't recover

I do remember, paddyann, not personally but seeing all the reports in the papers about the Glasgow tenements.

The courtyard of houses where I was born and where I lived for the first 9 years of my life, was built in the early 19th century. The houses were condemned as unfit for habitation in the mid 1930s when Birmingham Council started building large housing estates on greenfield sites further out of the city centre. Like a lot of cities at the time there was a push to clear the slums and provide decent homes for working class people.

Unfortunately, World War 2 erupted and put a stop to that.
In Birmingham and in many other large, industrial towns and cities, there was such a huge housing shortage when the war ended that any property that was still vaguely habitable was needed.
My old home was still in use until around 1970 when the area was redeveloped.
There are rather posh canalside apartments and wine bars on the site now!

Health and the Heat - I have queries!

Advice on living life with an elderly dog