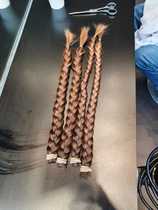 My GD 16 has wanted her hair cut for ages and she says she loves it now but I wanted to cry when I got the picture of the hair she’s donating. Her hair has been long her whole life and now it’s gone, I’ll tell her it’s lovely and it suits her, it’s very short but I really want to have a good cry.
They have to grow up but it’s hard.

Don’t want to rub it in, but what beautiful hair!!!!Take comfort from the fact that it’s going to a good cause and that it will soon grow back. What a kind and thoughtful GD you havexx

How wonderful and grown up of her to donate her hair, assume for wigs of people who have none. I guess it is a shock but she’s growing up and it will grow again, it’s not forever if she chooses.

My DGD did that in Year 4. She donated the hair and the sponsorship money. It’s a lovely thought that there is a use for the hair. I’m sure you’re proud of her.

She’s donating to children who needs wigs because of Cancer treatment.

It will grow again and in the meantime she has done something wonderful to help other girls less fortunate, which will boost their self-esteem as they undergo treatment.

I’ve never heard of this...how lovely. I think my husband may want to be in the queue for some though, if there’s any left🤔

My GD did the same thing when she was 13, she had lovely long hair and it was cut very short, but her best friend was very ill with Cancer and she wanted to help, sadly her friend died shortly after, but the money she raised went to the Hospice where she spent her last few weeks and her hair was donated to make wigs for children who had lost theirs to Chemo.

I was so proud of her, and she now has long hair again.

It’s a lovely, and quite brave thing to do.
But I know what you mean, I would feel the same if one of my granddaughters did it.
I would feel immensely proud though. 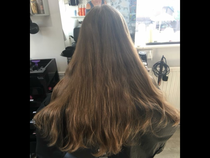 My GD did it too tanith I was just really proud of her.

What lovely girls they are, you should be so proud.

What a very brave gesture, you must be so proud. Something to always remember. I'm sure she will. Well done!

It's a wonderful cause. My mum used to have long hair. When my sister was diagnosed with cancer a few years ago (she has since recovered), Mum cut off and donated her hair in solidarity. (Sister didn't need chemo, just radiation, and she had minimal hair loss, but Mum wanted to show her support.)

Here in Canada, we have an annual cancer event. It's called Terry Fox Day, in honour of a young man who tried to run across Canada in a "Marathon of Hope" to raise money for cancer treatment in the 1980s. He himself had osteosarcoma, a form of bone cancer, and ran with an artificial leg because of it. Unfortunately he wasn't able to complete his journey as the cancer spread to his lungs, but his legacy has led to the annual Terry Fox Run and the Great Canadian Head Shave, both of which raise money for cancer research.

Lovely girls you should both be proud tanith and Jaxjacky well done to both of them.

tanith I think that's wonderful of her. I'm assuming she's donating to The Little Princess Trust? This is a wonderful organisation. The hair clinic I go to for my hair system dye to my alopecia has close links with the Trust. The owner of my clinic was at one time, a Trustee of the Trust I believe. He makes wigs and hairpieces for children with cancer and alopecia free of charge.
I think your granddaughter and others who do this are stars.

I'd be so proud of her for donating here hair. Congratulations to her.

I had my hair cut very short when I was 16 and my dad was in shock for months! Everybody else, and me- just love it - so empowering. It grew very fast again.

Both my DDs have recently done this. First haircut after lockdown. Both of them are just about old enough to be grans them selves and I’ve had a photo from them this morning having breakfast out together, one a very cool natural Pearl silver colour and the other a rich auburn. Unfortunately I never got to se them with their long haired look.

What a lovely, thoughtful thing both girls have done. A reason to be very proud of them indeed. 💐

Both have beautiful hair, and, if they want to, will be able to grow it long again.

My daughter and granddaughter did it together.
They were also sponsored.
It was quite emotional.

She has done an amazing thing.
I am so proud of her.

Hair grows anyway, it is fun to experiment

I can understand why it has upset you as it's proof that she's growing up and has a mind of her own. Like the others I think it's a lovely, caring thing to do and her hair will grow again.

My granddaughter had her long hair cut before lockdown and donated it to the teenage cancer trust. We all sponsored her and she raised a lot of money for them as well as the donation which makes real hair wigs for young people having treatment. I was so proud of her. She had a lovely short bob for a while but has since grown it again. The latest thing is to have the ends dip dyed, looks great.

DD2 has done this twice now. First time raised money for local radio Cash for Kids. Hair went to Princess Trust both times. I've seen posts on FB about lots of children/teenagers doing this - girls and boys and it is very brave of them. Often they have a family member or friend having cancer treatment.
Well done to all who do this and your DGD has gorgeous hair Tanith. It will grow back xxxx

My daughter did the same.Like others I was so proud of her but really sad to think of her lovely hair being chopped off.
She really suited the shorter style and said she couldn’t believe how heavy her hair had been.

Would you knit any more gifts?

So many dreams for our youngsters dashed.