Bird Flu- In or Out? 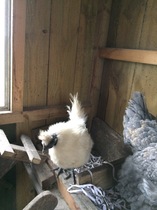 Today I have a dilemma, after weeks of incarceration, in theory my hens could go out tomorrow as the Bird Flu restrictions for our area are lifted but I am in two minds. As it stands, mine could have been out this whole time (according to some) as I have netting over their run and the wire is small enough to keep wild birds out(except the wren) but it wasn't a risk I was prepared to take. We are on a farm and near the coast with a lot of gulls and migratory birds & yet DEFRA has deemed us safe from the extended zone which carries on until the end of April...hmm. Well as the coop is large enough and the ground so wet , I think I will wait a little longer, but start pulling grass from inside the pen to feed them. Having lost my flock to marauding guns dogs & reared these from the eggs of the ones I lost, I am reluctant to risk further loss. Apart from three I was given, the rest all grew up in the shed whilst awaiting the dog owner's recompense of a new run, hence it was built large and with plenty of levels and a wire screen door.They all get along despite seven cockerels.
The selfishness of some people who have refused to keep birds in during the restrictions has shocked me. With thousands killed and livelihoods at risk in areas surrounding the outbreaks...humans eh?

There have been guinea fowl roaming the fields by us - it was only because one neighbour complained about the continuous row that they were penned. I think you're right to keep yours in at the moment especially during migration.

I would keep them in, we certainly are. They have a massive run that is contained with small size weldmesh .Having mesh for the 'roof' is not sufficient as birds flying overhead can contaminate the run. You must cover with clear plastic tarpaulin. What most hen keepers are not aware of is the fact that any ground they let their hens onto has to be prepared with DEFRA registered disinfectant such as Virkon S.

I hope you don't mind me coming in on this topic, it's something we feel strongly about.
We're in France, and I can hardly believe the regs are so strict in the UK.
BTW Izabella in another thread I overestimated the size of our run - it's more like 8m by 16m, but still very difficult to net.
In the Gers dept. where we live, raising poultry is the main industry. Especially ducks for foie gras. The situation has become so serious (avian flu is expected to return every year) that most élèveurs have decided to abandon the trade.
My husband maintains that it's all due to big business trying to knock out the small producers.
Nevertheless we haven't had any instructions this year to restrict the movement of our small flock of 8 .Which we did last year.

ps I forgot to say that hundreds of thousands of birds have been slaughtered "as a precautionary measure."

Welcome T. I think the regulations over here reflect a previous destruction of an industry - foot and mouth and how the countryside was brought to a standstill and livelihoods lost. Whilst this is nowhere in the same bracket, I think the sentiments remain.

I think over here people are wanting to protect the free range egg trade which will go if this takes a hold. However logically it will recur only with migratory bird patterns although the virus survives on grass and farmland for 50 days. I personally think it will come back on an annual basis. Over here it is many of the backyard keepers who are the threat to bio security despite a £5000 fine AND a prison sentence if violations occur. Someone told me DEFRA have now appointed people who are checking physically what bio security measures are in place, but I only have that second hand.

The free range egg and poultry business is worth millions and worth protecting. It is also in the best interest of birds to be able to free range. I just don't know where this is going, and I am sure many others feel the same. At the moment ours are in covered runs as I feel a moral responsibility for their care. We are also next door to a massive free range egg farm - whose hens are in the barns at the moment.

Do they still force feed the ducks for the foie gras? Excuse my ignorance.

Yes I remember the F&M epidemic in 2001, it was tragic. No wonder it has left a lasting impression in the UK.
We were still there. I remember watching the news every day to see where it had spread. One of my cousins is a sheep farmer in the Scottish Borders, and he was lucky.
Foie Gras - yes force feeding does still go on, which I think is cruel. But there's also still a big demand for duck meat, which I think most of the duck farmers here were supplying.

ps the farms here are very small by UK standards. Almost all owned by peasant farmers, on a plot of land just big enough to feed their family.
Agricultural land is very cheap, almost giveaway.

Yes, small holders or backyard hen keepers tend to view their hens as pets or "our hens". They fail completely to acknowledge that they are in fact part of a countrywide poultry industry and fail to undertake the necessary biosecurty measures we should all undertake In order to prevent its collapse.

Biosecurity. Typo. I am still working with one hand mainly after wrist and hand #

They are still in. I don't understand the logic of the DEFRA map on continued restrictions,I know it must be a hard one to fathom but just over the hill they are still on lock down and yet we are by the coast with hundreds o migratory birds around.
On a lighter note, I have been very careful to only add straw from behind fresh bails for fear of contamination but they kept scratching it out of the nest bays,looking for goodies. I thought I would try shredded paper, thinking they would not bother with that, they ate the lot!

We welcome relevant comments from anyone, thank you for your contribution TriciaF.

So that's it then, France is off! Quarantine from Sunday 4.00am