You may have heard about the recent HRT shortage in the UK, and so we've put together a page (linked above) from GP and Menopause Specialist, Dr Louise Newson, on what you can do if you are affected.

We also want to hear about your experiences - have you not been able to access HRT? How has this affected you? Please leave your comments and thoughts on this thread.

I had my implant as usual a few months ago and sincerely hope that there are no problems when I go for my next one in October.

Some years ago there was a shortage and the ladies attending the clinic were so irate that the nursing staff stiĺl tell stories to new staff about the atmosphere in the clinic at that time. Apparently we were quite scary. I went so ballistic that my blood pressure was sky high and I was sent to my GP to be monitored that day.
I shopped around and found another clinic which had supplies still in date and when I wrote telling my consultant where they could be obtained I was told to come in and received my implant just one week late.

You don't deprive a lady of her HRT and expect her to accept this when her oestrogen levels are rock bottom!

Are there specific shortages? Hope it's not Vagifem (estradiol).
Has any explanation been given?
When we were in France there was a shortage of a cream version of estradiol for a long time. They don't have Vagifem there. But if you tried other pharmacies you could usually get an alternative.
I asked why the shortage? Some company had gone out of business? Lack of basic ingredients?

Most patches are difficult to obtain, i was at my Drs on monday as i had just decided to stop the Evoral Conti, regarding my hair falling out, and asked him about the shortages,he said most are out of stock, but all tablets are available
Femseven Conti was the first out of stock apparently until next year, my daughter was on them and liked them, also i think Elleste Duet are not making any more. so when those became unavailable Evoral Conti was given instead as they were not that popular, but now they are out of stock in most places,
I read it was something to do with cost, on one report.and nothing to do with Brexit

I haven’t been able to get my Estelle for months, the GP and the Pharmacist independent of each other said Brexit was to blame.

It's not just HRT that's unavailable the bp tablet intake has not been available for the last two months I've been on this for years and had no problem on it now I will,have to change it. What. Nightmare!

I've had great difficulty getting my Osteoporosis drug. Pharmacist made huge efforts to get me one tablet, something going on!

People tend to blame Brexit for everything. They had the shortage problem last year in Australia and it's a worldwide problem. Some Elleste products are unavailable due to manufacturing issues:https://megsmenopause.com/2019/04/22/should-we-be-worried-about-hrt-shortages-in-the-uk/

I couldn’t get Elleste Duet so was put onto another one which gave me a horrendous period. Th pharmacist has now managed to source a 6 months supply for me but they couldn’t get any more.

I have just read the article by Dr. NEWTON which only refers to patches and pills. Are there shortages of implants or gel?

I've been on patches for almost 30 years, starting on a high dose reducing to the lowest. I've not had a problem getting them.

I started on HRT at age 25 after an emergency hysterectomy. I am 53 now and stopped taking them age 50, so I was on them for 25 yrs. Reason I stopped is because every 3 months I had a battle with my GP who would scaremonger me, all the risks, do I really need them , guilt trip me, in the end I did not have the energy to keep fighting for them, when I ran out I just went cold turkey. Since stopping I have suffered a significant increase in pain in my bones/joints, I am convinced it is due to stopping HRT. I have just moved and I am psyching myself up to ask my new Dr to go back on them especially after watching a BBC1 documentary called 'the truth about HRT'

cookiemonster66
There was interesting discussion on Woman's Hour this morning about the menopause, about the article in the newspapers that it can be delayed but also including the benefits of HRT, mostly saying how under prescribed it is in this country. I have not taken it so this is just in case you want to listen to the programme.
Good luck with your new GP.

My HRT was stopped by my female GP once and I had such dreadful hot flushes that I asked for an appointment. It was with a young male GP (would not have been my first choice). He was marvellous and told me I was old enough to make my own decision.

I'm desperate to know if anyone would recommend I go back on HRT? I started it in early fifties (can't remember exactly - too long ago) and stopped three years ago - I'm now 71. My new GP said I had to come off it due to my age and the length of time I'd been on it. Since then I've suffered and am still suffering, massive hot sweats at all times, night and day, completely NO interest in sex whatsoever and terrible joint problems; hips and knees in particular, but also wrists. Some days I can barely haul myself up the stairs, although only a few pounds overweight. I often think I'd rather die young in comfort than have all this pain and misery. Anyone have an opinion?

I watched GPs Behind Closed Doors once and a lady who was well into her 70s was featured. She'd been taken off her repeat prescription for HRT and was furious - she came to the GP to ask why, and the GP said that it was just because (like you) she'd been on it for a while and there were increased risks that they needed to explain to her. They had a reasoned discussion and the GP said that as long as she understood the risks and if she felt that the benefits HRT brought her outweighed the risks, then there was nothing stopping her resuming her prescription.

It would be worthwhile going back to a different GP - ask for one who specialises or has an interest in the menopause. You shouldn't have to live with those symptoms.

Jill, if you have no luck with your GP (after taking in the letter in Dr. Newson's article attached to this thread) then I suggest you ask for a referral to a menopause clinic. There they should have doctors who are up to date with the latest findings on HRT.
I've been taking it for 30 years and for me the benefits hugely outweigh the risks so I'm on it for life.

Medicine shortages of any kind are nothing to do with Brexit. We are still full members of the EU. Shortages from time to time with various drugs are pretty common and the causes are many and varied - remember the Naproxen shortage a few months ago? My husband's Creon enzyme supplements for his pancreatitis become indefinitely unavailable in the 40,000 size due the one and only machine that made the particular size breaking down and being unable to fix it.

Esspee don’t make the mistake of thinking GN is some benign counselling or sharing site for old people run by altruistic beings.

It IS a commercial site run for profit.

The same goes for the books. The authors pay to have their books in the Book Club. Doesn't bother me. It's all extra information and encourages me to investigate further.

But I've stopped doing the research surveys as they never seem to be asking the right questions. 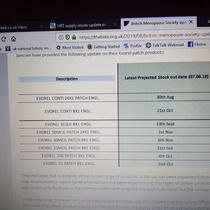 No good at links so just took photos ,hope they are clear enough.
Second time trying to post

I never needed/need HRT, but I went to look at the site and if there is a selling point to it, it isn't very obvious.

AS others say, GN is a commercial organisation and any such service as it provides has to be funded (all those helpful staff) and would not exist if it couldn't fund itself.

I won a spa prize years ago, and still visit that spa, it was so good. I am sure the prize provided some benefit for GN as well.

My adblocker has, after a recent software update, turned itself off and I notice that I only have to type a word into GN and a suitable advert turns up in the side bar. I am sure if I click on it that benefits GN as well.

You get owt for nowt.

Wake up to coronavirus, Britain!