Are the Gilet Jaune in Monmatre?

I shall be going to Montmatre next month for valentines -

With all the Gilet Jaune stuff in the news, I'm wondering if I should take a hi viz with me to blend in?

No, seriously, is there much rioting to worry about there?

Grany will be along shortly to tell you....she is very enthusiastic about them.
Otherwise, follow the old Irish saying ‘ speak softly but carry a big stick’.

oh, I thought that was a Norwegian saying -
I like old sayings...

Don't get mad, get even,
Revenge is a dish best served cold.
Treat those how they treat you.
The end justifies the means.
Meet fire with fire.
Keep your enemies close.
Time is your friend.

Yes, they do seem the sort of sayings that you would like

I love you too Lemons

Gilet Jaune have more or less disappeared. As ever the tales of civil disturbances has been overwritten

We have a house in Normandy. They were everywhere when they first started, but always good natured, always let British cars and British people through. All other French car owners did was wave the safety vest from under their front seat and they had no problem.

Gradually over the months it decreased to a token man or woman with a brazier to keep them warm on every roundabout, to just on main roundabouts and now they have disappeared completely I expect they will keep reappearing like jack rabbits for a while, but nothing to worry about.

Paris was no worse than London when ER or the anti capitalists, or Brexit supporters, or Remainers or Uncle Tom Cobbly and all were demonstrating.

But there are no problems in Paris at the moment. Enjpy your trip. 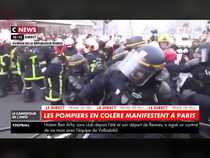 The police are having fairly "heated" clashes with ththe fire fighters, this was yesterday.

Up until last Sunday, I know transport was difficult in the city.

there are no problems in Paris at the moment

I hadn't heard that there were but then I heard today via the other side of the world that there is fighting in Paris. Riot police were clashing with firefighters- how sad when two sections of public sector employees are fighting like this.

I see GrannyGravy has already posted a link.

Now I'm jealous! As you're going for Valentine's Day, on the way to Montmartre be sure to find the little garden with the Le Mur des Je T’aime, a mural with 'I love you' in more than 250 languages in the Square Jehan Rictus on the north side of Place des Abbesses.

You can walk through the Passage des Abbesses and climb up to the Sacré-Coeur up some intimidating steps OR walk a little further on and up step-free Rue Ravignan, En route you can pass through picturesque Place Emile Goudeau, where Picasso, Matisse and Braque once lived.

There is a Funicular which will whisk you up and down in just over a minute each way. Have a lovely time!

Nice romantic trip for Valentines. We were recently in Paris during a protest march of the gilets jaunes. We couldn't believe when lunch time came they all took off their vests and went into posh restaurants for 2 hours!

It will all be fine by then and if not you will probably see nothing at all of the trouble - it's a large place.

I haven't heard that the rail and tube strikes have been called off yet. In December a group of French friends went to manifestations in Perigueux on 2 separate days.

There was a demonstration by the firefighters at their fire station a few miles from me. Lots of firefighters, no gendarmes and lots of cars. Many firefighters are volunteers and if they are called out whilst working in their normal jobs their employers are supposed to pay them. The employers however, are getting fed up with this and so the French are trying to move to a fully paid service.

Ellianne your description of the gilets jaunes going into "posh" restaurants is a good example of a difference between the Brits and the French.

Some of you may not be aware that the origins of the CRS (riot police) date back to WW2. A police service was needed in occupied France and after the war, they became part of the CRS. They are separate from the Police National and the Gendarmerie which are responsible for policing urban and rural France respectively.

The CRS have a violent history - for example the massacre of Algerians in 1961 when they beat up and threw a number of Algerians into the Seine. The exact number is not known - the Algerian community believed it to be around 300 whereas historians believe it to be between 50 and 120. It is for reasons such as this that demonstrators will fight the CRS.

A Welsh man I know , who lives in France, calls them " The Jilly Jones". I like that ....a bit like Jones the Milk.

Lemongrove I don't know much about the Gilet Jaune, you hardly get any info on MSM about them, only the videos on social media. Ha

I do like ananimous sayings very much hits the spot I'd say.

You surprise me Grany as you reference the Gilet Jaune regularly in your posts, encouraging them to protest.
‘Up the revolution’ and so on.
Always easy to encourage disruption of course, when you don’t actually live there.

I'm not sure I want to go now - Police V Firemen?

Do you worry what will happen to all your belongings when you die?

*This Country* is back 🤣

How do U remove Games threads?