He seems to have disappeared. 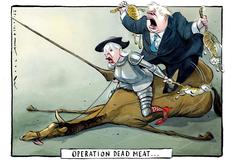 Today in The Times

I wonder if he’s in that booze fridge that they use?

Hiding and biding his time to make his announcements about the way forward hoping that this will divert public attention.

The really bizarre thing is that he is apparently obeying rules that don’t exist😄. Makes a change from not obeying those that do I suppose.

His current plan to bring supporters to heel

Attack the BBC and take away the funding from the licence

Send in gunboats to prevent those in little plastic boats from trying to seek asylum in the U.K.

Sack anyone that attended parties in number 10. Not him of course, that would be silly.

He's working hard on Operation Red Meat to save the skin of Big Dog.

(Possibly he's onto a loser there. I think most of the electorate sincerely hope that he is on his way out)

I think he's hoping it will all blow over - and it's business as usual from tomorrow. Being completely out of touch, perhaps he's unaware of the angry mobs?

The longer he keeps his head down, he is hoping that the public will become bored with feeling angry and let him survive.

Today £4.3bn fraud as a result of covid is being written off. Chancellor announced today.

Word of the day is ‘sparple’ (14th century): to deflect unwanted attention from one thing by making a big deal of another.

Yes well, we all know what happens to big dogs don't we? Johnson is a coward, another one to add to his lost of faults, honestly how anyone can possibly defend him is beyond me.

The latest efforts to distract the masses are both predictable and pathetic; migrants on boats, BBC licence fee, all populist subjects which appeal to the tabloid reading masses, he hopes. The terminology of 'No10 culture' is a lead up to firing scapegoats within the staff, hoping that people will be guillible enough to think that poor Johnson was led astray by the wicked, heavy drinking Downing Street staff. I would love for Teresa May to stand up in the house and point out that, apart from perhaps Christmas drinks, there was no party culture at no10 when she lived there. Dominic Lawson wrote in the Sunday Times that Johnson was warned by several people that having a party/drinks was both unwise and illegal, and Johnson just laughingly dismissed their concerns.

Interesting that Murdoch doesn’t seem to be supporting him.

Navy chap on the radio said using the navy will never work. No captain would position his ship to do such a thing.

This is never going to happen.

It is a despicable thing.

It seems it might be a case of Save the Big Dog by drowning a few puppies. SPADs and advisers are under threat. Some likely to be sacked by all accounts.

For a man who quite rightly won a large majority as an enterprising and individual Tory who really believed in a Euro-free global Britain, the blob has shackled Boris fully. Where has he gone?
🤔

It seems it might be a case of Save the Big Dog by drowning a few puppies. SPADs and advisers are under threat. Some likely to be sacked by all accounts.

I agree that there are likely to be a few sackings. Hopefully those people tossed on the bonfire of Johnson's vanity will spill the beans and finish him and his cronies off.

Save the Big Dog by drowning a few puppies Patel has got that in place, but it will be refugees who will drown, not a 'few puppies'.

he doesn't have to self isolate if he has had two vaccinations. My husband (argh!) and son are covid positive and NHS have texted me saying I don't have to isolate, I just have to do an LFT for 7 days or until 26th January, whichever is first

Why he thinks that firing a load of people for not hiding what he's been doing is going to endear him to the British public is beyond me. Obviously going for the lowest common denominator now with promises of bringing in the military to deal with refugees so he may still get away with it.

Children identifying as non binary can lead to tricky situations