"Mermaids, which receives funding from the taxpayer and runs training for schools and the NHS, offered to send a breast binder discreetly to a girl they believed was only 14, even after they were told that she was not allowed to use one by her mother.

Evidence obtained by The Telegraph shows that the charity’s staff have offered binders to children as young as 13 who say that their parents oppose the practice.

Chest-binding has been described by parent groups as a form of “self-harm” and it can cause breathing difficulties, chronic back pain, changes to the spine and broken ribs.

Dr Hilary Cass, the former president of the Royal College of Paediatrics, who is leading a review of trans children’s services for the NHS, describes it as “painful and potentially harmful”."

(The Telegraph link should open without a paywall)

This is demonstrably false reporting. Fake even...

If the government does support this group financially in any way then it should stop immediately.It should be easy to find that out though.
They are not worthy of even a penny from public funds.

The Tax Payers Alliance shows they received £20,483 in tax payer funding between 2018 and 2021 as reported in The Spectator.

They get (or have got) money from the National Lottery. HAs a million pounds in 2018. I don't know if they've had more since then.

That should be 'half a million pounds'. 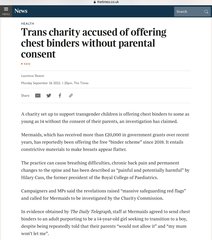 Breast binding is no different from breast ironing.
Both done with the intention of helping girls but actually doing them a lot of damage.

"A fourteen year old begins binding at 11. She suffered a rib fracture at 14 due to sleeping in her binder and perhaps also because her bones were kept from mineralizing properly via puberty blockers and cross sex hormones."

What are we doing? The road to hell is paved with good intentions. We are not doing enough to protect or help our children.

This is a worrying craze. My granddaughter is 15 and hopefully has not been influenced but she does not seem very well developed.Is this something new or has it been around for ages ?. Most of the top female athletes and role models seem to be very flat chested. Have they done this ?

I think it's unlikely that athletes use binders as it could hinder their performance.
If they do, though, that's up to them as adults.

This is about children and teenagers being encouraged to harm themselves in this way, and to believe that they can avoid being female.

I think the athletes are probably just very lean. Breast tissue is mainly fat. If you have very low body fat, like most athletes, you tend to be flat-chested.

I very much hope the Charities Commission will remove Mermaids' charitable status.

"The Charity Commission said on Monday night that “allegations involving vulnerable young people” are “serious” and safeguarding must be a “core priority” for organisations.

It came after The Telegraph revealed that Mermaids has been sending potentially dangerous chest-flattening devices to children as young as 13 and 14 behind their parents’ backs and against their wishes.

Staff with no medical training were also found to have given advice to users, they believe were as young as 13, that controversial hormone-blocking drugs are safe and “totally reversible”.

The regulator said that it was aware of the concerns and is “assessing” them. Campaigners called for it to launch a full investigation."

how on earth does this all not fall under safeguarding regulation and law?

The deception annoys me as well as the harm to the children. Much of the trans movement seems riddled with a patronising 'We know best' perspective - or the apparently 'benign' side of it, at least. They seem to believe that anyone who disagrees is 'phobic' or doesn't care about people in the way they (think they) do.

How dare a faceless charity aid a 14 year old to defy her mother and use a binder when she's been told not to - hypothetically or not? How can they possibly know what is going on in that household, or what the child has been through, physically or mentally? But of course they know best, and simply over-rule a mother who, according to the information they've been given has told her daughter that she shouldn't use a binder. It's so irresponsible.

Of course not all parents get it right all the time - any decent parent will be fully aware that we all make mistakes. But it is not for outsiders to step in and make decisions over the heads of parents.

The CEO of Mermaid took her teenage son to the Far East (Thailand I think) to have his genitals removed, when he was far too young to have this done in the UK under “gender reassignment “. She needs to be investigated and locked up, as well as having the disgraceful practice of breast binding investigated.

Yet again, you guys think that binders are more dangerous than:

Why can't you just leave trans children alone. They aren't going to listen to you or your opinions and just say "oh, you are right, I'm all better now"

It's a far better alternative to what they may do to themselves without it.

This is demonstrably false reporting. Fake even...

Are you a mouthpiece for Mermaids.

Yet again, you guys think that binders are more dangerous than:

Why can't you just leave trans children alone. They aren't going to listen to you or your opinions and just say "oh, you are right, I'm all better now"

It's a far better alternative to what they may do to themselves without it.

Your condescending ordering people around is exactly what I was describing in my last post.

'Mind your business' sounds like playground talk, but it is no less 'our business' to object than it is the business of total strangers to provide children with the means to self-harm by binding their developing breasts.

Yes it is Janejudge but part of safeguarding is protected characteristics and preventing discrimination, as well as protecting children's mental health.

Try putting yourself in a trans person's shoes for just a moment. Try looking for ways that help them that don't involve telling them who GC feminists have decided they should be.

These threads damage my mental health. I can't imagine how trans people must feel all the time the way society treats them.

Also many object to non-trans people speaking for them based on Stonewall training courses.

My cousin is a transwoman VS, I'm quite capable of accepting people for who they are and respecting their own rights as adults whilst being concerned about safeguarding with respect to children.

I hope you are okay

I would very much like children to get help and support for devastating gender dysphoria that won't injure them.

Mermaids know nothing about the children who contact them online and whether any individual does actually suffer devastating gender dysphoria.
Yet they're happy to distribute something that will harm them anyway.

Are women getting angrier?