There is a photo in today's Times of the Very Reverend Steven Lake, Dean of Gloucester, blessing the solar panels that have been installed on the roof of the nave of the cathedral.

I don't think I understand blessing. What a wacky thing to do!

Don't get me wrong. I'm not complaining, just saying I think it's a wacky thing to do... like bungee jumping to dip a biscuit in a cup of tea 75 metres below and stuff like that.

Of course, it goes without saying (as the saying goes), I respect people's right to do harmless wacky things. I don't necessarily respect the things though, whatever their entertainment value. This one's high on the weird entertainment value list

Oh yes, the icing on the cake is that he's wearing a hard hat. In case the sky falls, I suppose

Whenever we get the cheque from Scottish Power for our feed-in tariff, I bless our solar panels!! 😇

I second DaphneBroon's post. I try to run the washing machine and the dishwasher and do the ironing when the sun is shining. If there is plenty of sunshine on a winter's day the ground source heat pump runs too - using all that lovely solar energy.

Hard hat in case he falls off the roof? I don't think he can fly. Tying on an elastic bungee card could have provided another safety feature.

I daresay the rest of the cathedral was already suitably blest/consecrated, and he wanted it all to match.

Blessing things is his job.

It was on our local news thatbags and the funny things was that it was absolutely throwing it down with rain all day long!

On the same day:
Flood Alerts across Gloucestershire was reported.

I'm all for blessing co-ordination!

Why did he need to go up there to bless them? Couldn't he have sent blessings up from the ground?

At first, on reading the OP, I thought he bungee jumped up there. But he didn't,did he?

I'm picturing him now with a hard hat, on a bungee jump thing, with a 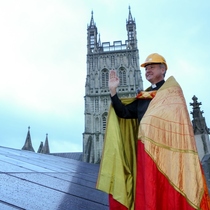 I shouldn't be irrevent, but I must say he does look as if he may have flown up there

Better to be blessed than cursed!

Does he have legs? Is he hovering? Is he modelling the latest outerwear for fashion conscious clergy? Will the solar panels provide more energy now ther're blessed?

(I think it's him being irreverant!)

Haven't seen any sun since he blessed them
Oh dear

They're all at it! Hereford one. With a nice matching hat. Sweet.

Oxford bish. He started it all, back in 2012. In Deddington.

Message deleted by Gransnet for breaking our forum guidelines. Replies may also be deleted.

I watched those wonderful programmes on the Super Sewer and there was a bit where a Bishop? blessed the cutting head before it went underground. IMO he didn't do a good job, and seemed almost a bit bored (sorry) Perhaps I got it wrong

I saw that one Auntieflo I rather liked the idea that the statue of St. Barbara would stay underground. It's an incredible enterprise isn't it? So massive and yet so much of it is done a few inches at a time.

Who would you most liked to have seen but never did?