We're going to our DS wedding overseas soon, and I really want to take something unusual (and light!) for the tables/other guests. Any suggestions please? So far I like wedding crackers but they're quite ordinary, so I'd appreciate any other ideas please. Its going to be a small "do" but I want to help make it very special.

How many people is it for? Do you want to make something or buy something?

I do calligraphy and so made I bookmarks, with the guests name written on it, as a table placemarker. I had some small stickers printed, with the names of the wedding couple and the date of the wedding, stuck onto the back of the bookmark and I finished it off with a ribbon looped through the top end that matched the bridal colours. Very simple to do, inexpensive and lightweight to transport. It doubled up as a placemarker and a wedding favour.

Dilly there will be 30 of us and I would love to make something but it would have to be simple, so probably buying is more realistic tbh!
Chewbacca they sound lovely - I can barely write legibly so I'm out on those though

Do you do cross stitch dontaskme? If you do, you could do a very simple design, again maybe just the name of the guest, date of wedding and names of the bridal pair. Depends how long you have to do them jntil the wedding though.

You can buy flower seed wedding favours online. The seed packets can be printed with the couples names, dates etc.

Not wedding favours, but a nice idea: We were at a wedding recently and there were printed cards on each table, pens supplied. On the card was printed "My name is: ...." and "I look like": (with space to draw), and below that "What I like most about love is ..." And finally "The best advice I have for the happy couple is ..."

The cards created a lot of fun plus conversation piece at the table. The cards were collected for the bride and groom at the end of the day.

If it is a destination wedding somewhere warm, don't choose chocolates! We had some lovely chocolates gifted as a favour, but they all melted before we had a chance to enjoy them!

If possible choose something with a theme from the destination of the wedding, for example tiny bottles of Ouzo if they are marrying in Greece. Or totally the opposite; if they are marrying in the new wife's home country then choose something very British like little jars of Branston Pickle, or Jelly Babies etc, a souvenir from son's home country.

But I think EveryonE loves Pocky .. It's light weight and can be slipped into some type of cellophane bag with pretty sticker for closure ..

Pocky -I looked it up for us

Pocky is a snack food produced by Ezaki Glico. Pocky was first sold in 1966, and were invented by Yoshiaki Koma. They consist of chocolate-coated biscuit sticks. It was named after the Japanese onomatopoetic word pokkin. The original was followed by almond coatings in 1971, and strawberry coatings in 1977. Wikipedia
Place of origin: Japan
Created by: Glico

Never heard of it!

DS and DiL did some for their wedding that just had the guest's name on, but they could be as decorative as you like. They bought the rings and the letters separately, and making them very easy.

Seriously, does anybody expect Dontaskme to pack jars and jars of Branson Pickle or bottles of Ouzo in her luggage?
Or honey, or guitar picks?

And who on earth would thank you for them?

If you must have favours (and personally I think they are entirely unnecessary) , is it not something to discuss with her son and future DIL and her family or whoever is organising the wedding?

Where did this 'idea' come from.??? Why do you need to supply the guests with something to remind them of your wedding, surely photographs do that and now adays everyone has mobile phone that take vidieos and photographs. Seem to me 'favours'have come from the same place that 'goody bags' for children to take home from friends birthday parties.!!!!

I thought wedding favours were a ridiculous idea when DS and DiL married 12 years ago and I still do. They had miniature bottles of port and little packets of love hearts. DiL's choice so said nothing. If it was DD mind you, it would be a different matter.
Is it an American thing? If so, enough said.
A good friend's nephew married in Italy last year, I'll find out what they had, if anything.

No favours at DD wedding. She thought they were an unnecessary expense.

My dd was agonising about favours, and it was a fairly big wedding. I said not to bother, the vast majority will just end up in the bin. Plus anything reasonably nice (even if basically useless!) worked out very expensive for a crowd.

In the end a SiL found tiny little 'wedding' bubbles, which were very cheap, so since there were quite a lot of children, we scattered lots of these on the tables - many of the adults enjoyed them too.

The other thing dd got in the end (high summer wedding) was white 'wedding' flip flops, for later on, when so many women's feet would be killing them. I will admit that I thought it an unnecessary extravagance, but they were very comfortable - I still have mine over 3 years later - and extremely popular! Not one pair was left.

No equivalent for the blokes, but I doubt they cared.

You need to consult with bride. If she wants to give out favours she will have already sorted something. I don’t think it’s your place to organise favours unless she has specifically asked you to. (Remember it’s not your wedding).
The only thing you could perhaps do is buy everyone a small local souvenir from where you are going and give it people just as they are going home. 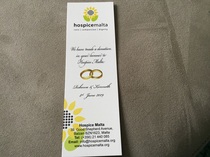 My DD3 is getting married in 4 weeks time. Instead of wedding favours, they have made a donation to our local Hospice who have provided small bookmarks (see photo) for guests to keep.

My daughter in law gave everyone a miniature bottle of alcohol (vodka or scotch) with a personalised label on so it could be kept as a souvenir of the wedding. I think everyone received a shot glass as well

How about personalised tiny candles, some of which come in a tin, others in voile bags. Here are Ebay search results for them.
wedding favour candles

The last wedding I went to the wedding favours were 3 chocolates in a net bag tied with white ribbon - most of which were left on the table - just seems like an unnecessary expense to me. Do people really expect to find a little gift next to their plate at a wedding? Would they even notice if it wasn't there?

What would attract you to a house

Javid and Sunak have both resigned their cabinet posts….

Blast from the past.