Well, that's how I feel tonight.

It just comes on, out of the blue, but boy when it comes it lands like a ton of bricks.

Had a row with Mr P earlier, which didn't help. Now stuck in a mental groove regarding DS1, and how he is sitting pretty having inherited a fortune from my mother.(She left me nothing)

Sorry for posting this, just need to put it down.

I empathise. Life can be very challenging.

I hope you feel better tomorrow 💐

I'm sorry you feel sad and low. It will pass. 💐

Ah Phoenix, I'm sorry to hear you're having a crap time of it; it's always worse at night when we dwell on things. Rows with the Mr's are always vexing and, as you say, its not helped with the introspection of past events. Nothing I can do to help practically, but you're with your friends here and you've always got a shoulder amongst us to lean on. I didn't want to read and run so please, have these until you feel a bit brighter.

Oh Phoenix,sorry to see you're having a hard time.Is there a friend you could vent too,or chew things over with to get it off your chest? Life certainly can be confusing and infuriating at times

Sometimes even you, brave lady, just need to let it all wash over you a bit. It's possible that a number of circumstances have just shown up together when you're tired or not mentally up to giving yourself a boost.

So try not to think about who said what, don't start thinking about old stuff or try to reason it through at all. Just have an early night, maybe listen to something that might make you laugh. Start again with Mr P tomorrow - it's a new day, I reckon you'll feel better. x

They do say 'never go to sleep on an argument' which is good advice.
I haven't always followed it, though, 22 and sometimes it can help to give the OH a kick on the shin and tell him he's snoring (even if he isn't).

So sorry to hear this. Some days it is far more difficult to cope with what life throws at us. I do hope you get a decent night’s sleep and that tomorrow will be a better day.

Callistemon we are NOT interested in how old you are!

Yes: others are right, things are always worse at night, Phoenix. I’m sorry you’re feeling so heavy. Tiredness acts like a magnifying glass on the not so good in life. The weight will lift, even if it doesn’t feel like it now. Just be as comfortable as you can and give a thought to what you need right now. Sending a hug and love.

Writing it down is a step towards putting a positive spin on what is bugging you.

Rows clear the air. Try not to dwell on it. The issue with your son is clearly complex and not going to go away but all you can do for the moment is grit your teeth.

Life can be a bitch.

It’s horrible to feel so down. Then your brain opens boxes you’d struggled to close a long time ago making things feel worse. I hope tomorrow is a better day

Callistemon we are NOT interested in how old you are!

Although 22 again? Perhaps not.

Phoenix, were you at odds with your Mother and'son? It seems a bit hard if you weren't. I do think that it's ones right to leave your estate to those you want to though. It seems unfair if your mother had other grandchikdren, to single one out unless perhaps the others never saw her.
I hope you have made up with other half. I have no one to fall out with now.

phoenix I don’t know of the back story here. Anyway it’s none of my business.

That said, sleep on it. Try not to mull over whatever it is that bugs you. Things will seem better in the morning - they usually do, in my opinion.

Sometimes it’s good to vent. A bit like punching a pillow.

Last night I dreamt I stuck a fork in DH, I don’t know where my subconscious got that from. We went to sleep on good terms. 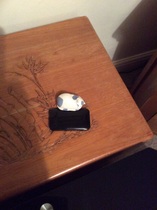 Much harder to shake off a fit of the glooms at night. Hope tomorrow brings a new start. Just keep keeping on - that’s all we can do.

My inheritance was a pouffe, a frying pan and cat ornament - I then got asked to return the cat as a niece of my stepmother wanted it. Fortunately I was a little bit deaf that day.

Hello all, and thanks for the posts.

Complicated thing with my mother, ran myself ragged when my darling step father was ill, and after he died, was known as the bag lady where I worked at the time, because I always had an overnight/weekend bag with me, as I was either going to or coming from my mothers!

I really don't have the energy to explain it all here, and I'm sure you would find it boring, although I could write a book about it . I used to be so proud of my mother, single parent in 1958, I had a cleft palate, was supposed to be adopted, when pregnant the neighbours and relatives were told she was "working in Birmingham", was sent to a mother & baby home in London (the family were in Malvern) and until she was sent there, if anyone came to the house she was hidden away, once in the larder!

Despite the cleft palate she decided to keep me. Bit hard to come back from "working in Birmingham" with a six week old baby!

Apparently, one had to spend 6 weeks in the home before being considered in the right mind to sign adoption papers.

Anyway, as I say, long story as to how things ended up as they did, and to be honest, I still don't how or why.

Oh Phoenix a ‘bugrit* evening. They’re horrid and difficult to shake off, no magic answers, just hoping maybe a good book to get immersed in or music to soothe.
‘Thèse things will pass’ seems trite, but they do x

hope you feel a little better for getting this off your chest.

We all have these times Phoenix in one way or another, and I know you have much to dwell on from the past and be extremely sad about.....as you say, sometimes these things just hit us.

If I have cross words with Lord Lemongrove I find it cheers me up a bit to clean the sink vigorously with his flannel.😈