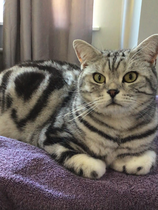 My cats mean the absolute world to me and help me so much when I’m feeling under the weather like now , here are my lovelies 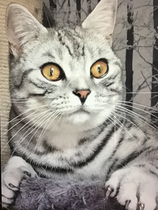 Our previous cats and the present one, standing on my shoulder.

His brother was NOT meant to be hinging oot the window as they say in Glasgow, got caught at it, and came back in when asked. 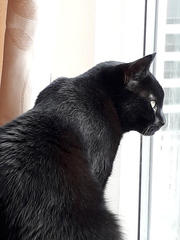 This is Bert, I don't know why he's sideways 😀

Well he was as I was typing 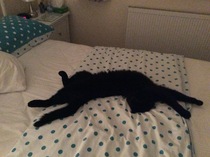 Paddy in one of his ‘poses’. 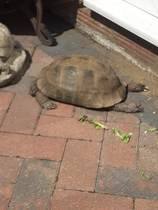 My tortoise. I've had her for 58 years and I'd be lost without her! Here she is sunbathing on the patio. 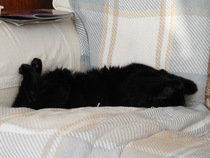 The black one is ours. He's very laid back. The other isn't ours, but she thinks she is! 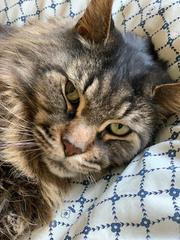 Here's Baz. Looking very sleepy. It's such a shame he has a grumpy looking face as he's the gentlest and most loving puss anyone could hope for. He's a whopper too. 12kgs. 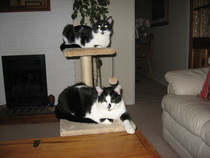 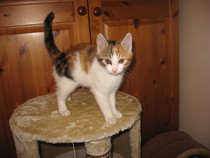 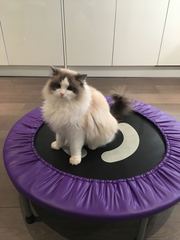 Mainly cats though. Any dogs about?

DD2 with my Ollie (he died suddenly a couple of years ago.) And her 2 boys - Rocky and Baxter. 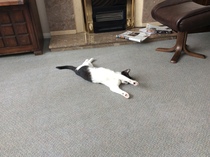 Molly, our laid back cat. She is a darling, very gentle. I hope she is not too put out when Poppy, my daughter’s Cockapoo, arrives in four weeks when she is old enough to leave her mother. ( see second picture). She will come to us during the day when my DD goes to work, although she is working from home at the moment. 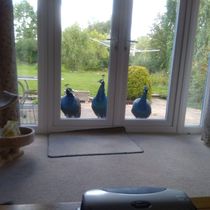 Not the normal pet, but they are really tame now, and live in our garden. Photo called "Where's our Breakfast" 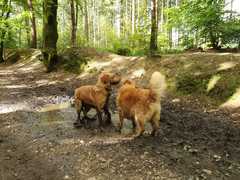 The boys having a mud bath treatment to beautify their legs!

They are ALL gorgeous. I would love a tortoise. 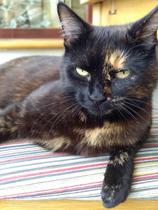 This is Pumpkin. She was a rescue cat but seemed to feel at home from the moment she came in the house. 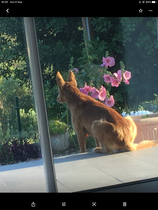 Hopefully here are a couple of the The Dog we do Not Own. We are reluctantly willing to own him (if we have a dog we’d rather be totally responsible for it and not all our property is fenced,apart from the fact that he can jump six feet from a standing position.) He was taken in by DH’s nephew where he got regular food and exercise. Unfortunately DN took in two more large dogs who attacked him and after several weeks of living wild he turned up on our doorstep looking very much the worse for wear. He’s willing to be fed, stroked and sheltered from the weather. But he is as slippery as an eel if you try to restrain him. He has obviously been very badly treated somewhere and won’t let anyone pat his back or approach him from the rear. DN brought his bed round last winter but he will only go in it if he knows he has a clear getaway.
Not only are we all willing to wait on him hand and foot (this includes DD, DGD,DGS and DSIL, who was probably the first person to stroke him albeit from a sunbed while he was lying down, but he has taken to bringing his friends around, some of a neighbour’s dogs. I was taken to task by the said neighbour for not having him vaccinated against rabies. I told her that if she could catch him to do it then I was quite willing to pay for it. She hasn’t asked for any money!
Most Portuguese people are very fond of animals but large dogs are mostly treated as working animals and only fed what the owner can afford (scraps). Having said that the neighbour does work in a restaurant.

Already dreaming of the weekend. (sighs)

We need a coup