I am looking for a new cat but the shelter tells me most of their kittens are very shy or semi feral. Do you think a cat like that could make a good companion pet or should I look elsewhere?

My daughter gave a home to a cat that she was told would hide for a while before she felt at home. The first thing the cat did when she arrived at their house was to climb onto my daughter's knee and that has been her place since. She turned out to be very friendly and not at all shy.

We had two kittens from a shelter, brother and sister. Tbh they were never really lap cats. We were told that kittens need to be handled and socialised in their first few weeks and these were not. Personally I would go for a kitten from a family home or an adult cat that needs rehoming.😺

Cat are just different peronlotie in my experience, mine have all settled in while keeping some of their quirks. Including one who had been rejected twice.. She was the hardest but so friendly and affectionate once she learnt to trust again

We've always had related rescue kittens in pairs, though once we had a mum and daughter. They've all had their own personalities, no problems.

We had a kitten that hadn't been handle much and he was very shy. Wouldn't let us near him, although he would come and sleep next to us.

Then, one day, I found him fast asleep in a nice warm patch of sunshine. I stroked him gently with one finger - maybe he thought it was his mum licking him - he purred loudly before opening an eye and discovering it was me. We never looked back.

Nothing wrong with a shy cat, just take things slowly and gently.

Are you only looking at kittens? There are older cats needing homes that can be very loving when they settle in. My own cat is a Rescue and it has been lovely watching her confidence grow as she has become the Queen of my house.
She is black and sadly it seems black cats are more difficult to rehome than other colours .

Many kittens are actually born within a rescue centre, and are handled regularly by the staff who care for them. Some may have actually been hand reared and bottle fed. A good rescue centre will be linked to an animal behaviourist, who will work along side the regular care team and asess all new arivals over several days before putting a care plan in place if needed to help rectify any problems. There is a very good rescue centre at Ashbourne Animal Welfare society in Derbyshire, rescueing and rehoming Dogs and Cats of all breeds and ages. Mybe take a loom at their website?

Woops! Sorry about the typo mistake, should read ' Maybe take a Look at their Website? '

Julia, I am not in England.

Whenever this thread pops up "new cat" I'm experiencing disappointment.... Go get a cat, give it lots of love and spoil it rotten....

I have 4, all weirdos but very loved

One with all sorts of allergies who is just a massive lump of purring dribble.
One neurotic affection mess who likes to wake you up by licking your eyelids.
One obsessed with water who pulls wet washing off the airer to sleep on and will try to break the door down if you have a bath without her in there.
One who constantly gets caught somewhere by her claws but doesn't cry or struggle and just hangs off the curtains until someone finds her.

They make life so much better lol

Kittens usually get rehomed quickly, because they're cute. Why not have an adult cat?

I've had several cats, over 40 years. My current one was feral, and I'd been feeding him for a couple of months (I already had 2 cats then) and eventually trapped him, took him to be neutered and microchipped, took him in as my own cat. That was 9 years ago, when the vet reckoned he was about 7 (so he's an old boy now) He's the gentlest, loveliest cat I've ever known.

Feral kittens grow into excellent mousers. Every cat I’ve had was either a farmyard kitten or a feral stray, and they have all proved to be very efficient hired killers as well as purring companions.

Feral cats are excellent mouser geekesse, whether you get them as kittens or adults. I've had many cats over the years, all of which have been strays or rescues and they've all been so individual in personality. I can easily remember each and every one of them.

Our two ten year old female cats were feral kittens, born in a pub car park without the human contact so necessary in their early weeks. It did take them a while to gain their confidence with us but have been fine since. They love company and are very affectionate. They have always been very wary of strangers, not necessarily a bad thing and no more so than some of our other non feral cats. Our two are certainly not good mousers or birders, obviously not read the feral cat manual. (Considering their early food was either provided by their mum or the occasional bag of pork scratchings flung their way they are blooming well fussy eaters!) 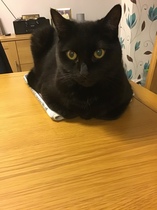 I got an adult cat from a rescue centre just over a year ago. Her elderly owner had died and the son had thrown her and her brother out in the street. A kind neighbour took her to the centre after feeding her for a bit.

She had been at the centre 4 weeks and had not moved from the bed workers had put her in. She licked me when I went to choose and I couldn’t resist her. She was so scared when she arrived and would look over her shoulder when she ate in case I took it away from her! She is now so affectionate , loves me to bits and I adore her. Please get a cat that needs a good home kittens don’t stay cute forever

May has the most gorgeous eyes Alima; she's grown into a really beautiful cat.

Thank you Chew, she is rather gorgeous isn’t she.

TwiceAsNice I hope there is a special place in hell for people like the son who threw his mother's cats out into the street after she died.

I keep picturing them trying to get back into their home and not knowing why they couldn't.

Thank goodness you chose her to come home with you. What happened to her brother I wonder.

Our last three cats were a litter born at the vets’ surgery to a feral cat that had been taken in that day. One of the vets lived on the premises and hand reared them for their first weeks - they had to be taken from their mother as she was so wild and aggressive.

Two of them grew to be very sociable, the other didn’t. She would swipe at visitors, and though she tolerated us and would sit alongside us, she wasn’t keen on being stroked and always seemed to be on alert. She chose never to go out, though the other two did all the time and were quirky, confident characters. The male thought he was human and liked to sit upright on the sofa next to DH with his paws crossed like his best mate.

One thing to bear in mind. They all three had underlying health issues, and two sadly died young, which the vet said was at least partly due to their background.

This thread has given me a nudge to do something about my catless state. I've just checked out the website of my local animal sanctuary and see that they have an old boy of 12 who's looking for a new home. He looks a grizzly old lad; scars and a limp from old injuries, but I like the look of him. There were several kittens available too, with more due to be born imminently, but I'd like an older cat I think. Anyway, I've completed the online application form and will wait for their reply.

Good for you, Chewbacca.

And Alima, May is just gorgeous.

TwiceasNice I have heard it said that there is no greater love than a rescue animal for its new owner.

I can't imagine you would have trouble with a kitten, even if it is semi-feral.

Let it hide if it feels like it, but talk gently to it every time you pass its hiding-place. In a while it will come out.

Put its food dish where it can smell the food from its hidey-hole and do leave it to eat in peace. You can gradually increase the distance between its safe place and the food bowl.

I go for an adult rescue cat every time. Kittens can be a lot of work and destroy furniture. My 16 year old Tara runs around like a 4 year old and can fly over my six foot fences. I love her and she loves me.

Now the nights are colder, she shares my hot water bottle. I am under my duvet she is on top and lying on the hwb.

Chewbacca you will love him to bits.

What do you think?