I’m watching this programme in disbelief. A couple who are 58 and 59 have asked for help in bringing their food shopping bill under control and eating more healthily. They’ve just spent £157 on mainly junk food. What makes matters worse is they both have Type 2,Diabetes and the husband has sever arthritis and could be in a wheelchair in a couple of years. Her recent eye screening shows that her eyesight is deteriorating because of her diabetes. The final jaw dropping factor is that she is a nurse. No wonder the NHS is in crisis.

I haven’t watched this programme lately, but am always amazed that intelligent people can be so clueless about food. When you hear what is spent on takeaways, ready meals, cupboards groaning under the weight of crisps, chocolate bars, biscuits, then when they are told how much they spend in a year on such stuff, the tears fall, sob, sob, we really want to sort this out etc.

I would be too embarrassed to let the viewing nation see what a twit I was.

I watched it too in disbelief. Apart from trying to lower their sugar consumption, there was no mention of lowering their carbohydrates. Carbs turn to sugar in the blood and are just as bad as sugar for a diabetics. Also they seemed to continue to have fizzy drinks and some sweets. I thought the participants were idiotic and the presenters and program makers made a very misleading program.

They seemed a lovely couple, but very short of common sense - and the wife was a nurse!! I thought perhaps the foods they weaned them on to were maybe the first stage in an improved diet - and hopefully they could graduate to much better choices later? Perhaps a straight move to a healthy diet would have been too much for them, willpower-wise, given the amount of junk they were eating?

We too watched in disbelief, especially at what they put in their trolley at the supermarket . I do hope they managed to carry on with their healthier eating .

All the fizzy drinks seemed very unusual for people of their age.

£157 a week on junk food!
There was an article in our local paper regarding NHS staff and poor diet.
The excuse was that the shift patterns didn’t allow for the purchase and preparation of healthy food.
I can prepare a healthy meal in 10/15 minutes.
Most supermarkets deliver and many are open 24/7.

I watched this too but missed the bit where they said she was a nurse. I was astonished at their ignorance. Aren't people given advice any more at GPs or clinics?

DH was convinced it's staged - can anyone really be that stupid?

I was also commenting on the lack of advice about carbs. The husband seemed far more sensible than the wife who was stubborn and selfish. He seemed keen to embrace a new diet whereas she was determined to find fault.

I wonder how their children and grandchildren eat at home?

I didn't watch it but my husband watched a bit of it. He is diabetic and extremely sensible about his diet. He couldn't believe what he was hearing/seeing. I doubt that it was set up.

All the family shown on the programme were on the large side.

I watched it and was quite pleased that they'd both managed to lose some weight and adopt a healthier lifestyle. I don't think you can expect people to change habits of a lifetime overnight , little bits at a time seem to be working for them

DH has been pre-diabetic for years and I work hard to make sure his diet keeps it that way and he doesn't develop Type 2 diabetes. He has a sweet tooth and very little will power so I know what he'd eat if left to his own devices

I was dismayed that during his recent lengthy spell in hospital he was offered puddings with every meal, biscuits, cake, jam (on toast) and sweet fruit juices. His discharge notes show a now elevated blood sugar level.

I took in plenty of fruit, which he loves, but would he say no to the sugary stuff?

I mentioned my concern to one of the nurses and she said, 'It brightens up the day to have a treat.'

I couldn't believe that the couple had a whole cupboard full of chocolate items. I couldn't help wondering about the state of their teeth, quite apart from the obesity issue. The recipes they were introduced to were balanced and sounded quite tasty and it was encouraging to learn at the end of the programme that they had succeeded in losing weight and she had given away her deep fat fryer.

She looked more like 75 to me! All that unhealthy eating had really taken its toll. I found her reluctance to eat vegetables very juvenile.

I think is is so easy to get stuck into a way of life and convince yourself that you can't live any other way.
If you have persuaded yourself that you can't cook (I'd guess in this case that the husband did most of the cooking until relatively recently) and getting out the deep fat fryer is easy when you want a quick meal, as is the takeaways.
Working shifts as a nurse has probably meant the lady got in the habit of eating what she thought of was something quick, however unhealthy it may be!
I love how ll the saints , who obviously don't allow a morsel of fat or sugar pass their lips, feel it's ok to be so nasty about people in this situation - must be wonderful to be perfect!

I watched about ten minutes of it and gave up. When I heard they were both diabetic I lost patience. Maybe I'm becoming intolerant in my older age, but this was ridiculous. Most probably staged though (giving them the benefit of the doubt) as I'm sure the producers must scour the country looking for the worst case scenarios and then beef them up a bit. Gives us all something to talk about though, so effective I guess!! 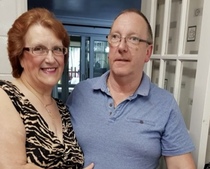 What I found odd was that they (in fact it was the wife who had applied) had contacted the programme, so acknowledged there were problems - seems a bold move (airing the issues on national TV), rather than going to the doctor? I think she fancied herself as a bit of a laugh, an entertainer - but they were humiliated by being on the show really.
They looked a bit younger 3 months later

I wonder if she’s a Gransnetter

I watched it too I could not believe she was a nurse their age and all that sugary food,fizzy drinks and junk food that was in their house.

I am not a gran, but old enough to be one - new on here.
I became a mum at what some would call an 'advanced' age, so like some grans and grandads on here - now live 'intergenerationally' with my teenage daughter.

She often has prompted me to shift in my eating habits.
I didn't see the programme as (out of choice) we don't have a television. We could afford one, but I guess both realise that if we did, at least I would be tempted to sit in front of it too much, also like many people I tend to feel bombarded by too much information. And so I have a friend in the radio instead, which helps me because I tend to put it on whilst I am doing something.

With regard to food, I thought I was doing pretty well on the food front until recently. Main reason being we have never been affluent (although rich in spirit) - and I have always home cooked for that reason. Also wanted my daughter to eat well.

Big prompt came for me when she wanted to go vegetarian. I have found this a big challenge. We never ate much meat, but she is aware of the climate change arguments and guess I just thought it would be easier for us both to eat the same.

It has meant actually rethinking everything. I'm not sorry though, as it kind of gave me a shove to look after my health better. ('m in my late fifties).

As things stand - I'm not dogmatic but it kind of reminded me how difficult it can be to change food habits. Personally I think this is a very interesting and important thread as I really have noticed that food can carry many meanings, you know, comfort wise, family habits etc.

I'm at the point where we cook vegetarian mainly. Nowadays I tend to be the sous chef in our kitchen which is brilliant as whilst I was growing up I was never really allowed in the kitchen and didn't learn to cook until very late in life.

Once again this thread is very important I feel, as changing ways can be so difficult, don't doubt that the show was hyped up to be more dramatic but value the discussion.

I have noticed it is often the case (with me certainly) that I know what I should be doing health wise as I get older, but actually doing it is a different matter.

Listened to Woman's Hour which is quite good series at the moment (how to live longer) today's episode on exercise. The speaker reminded us that even washing up is exercise not necessarily necessary to go to an expensive gym...

hope it is ok to post here even though I'm not a gran, due to my age don't feel I fit anywhere else. Sure than many on here have child care responsibilities also?

You don't have to be a gran to join in the discussions. All comments are welcome.

Did people in Sunderland want this when they voted for a no-deal brexit?.