Your best ever TV ad? 'Levis in the laundrette' for me!

I see that model Nik Kamen has sadly died.
For me the 1985 Levi's ad, set in the laundrette, to the music of 'Heard It Through the Grapevine' was up there with the finest.
Any other contributions?

I love the Renault Mégane "I See You Baby (Shaking That Ass") ad from a few years ago. I believe there were quite a lot of complaints at the time though 🤭🍑.

Those coffee ones with Trevor eve’s wife in

The 'Real Fire' advert from the 1980s with the dog, cat and mouse and the music Will You Still Love Me Tomorrow. Go mushy every time I see it,

The Guiness waves one

The Hahn lager one with the guy jumping into the bath

The 'Diet Coke' window cleaners outside the office block.

The John Lewis one with the woman going through different stages in her life, to the Billy Joel song ‘Always A Woman To Me’.

A few years ago we decided to tranfer some videos of our children from when they were young on to DVD.

The old videos were in a box with old tapes of various TV programmes.

We scooted through the programmes, which in itself was as blast from the past, as were the old adverts.

The one that stuck out for me was The Castella Cigar commercial with Russ Abbott.

My DH in those days was more of a Hamlet man.
'Happiness is a cigar called Hamlet'

Oh, Nick Kamen was so beautiful. terribly sad to hear he's died so young. It was a great advert.

And the Honda advert with that wonderful song, The Impossible Dream.

Leonard Rossiter spilling his drink on Joan Collins on a plane was a memorable ad - was it Cinzano ? 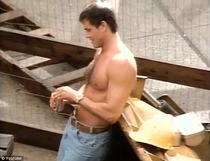 The first-ever advert aired in 1994, starring topless construction worker Lucky, who had a group of office women rushing to the windows at 11.30am every day when he stopped work to drink a can of the famous drink.

One of my favourite adverts was the 2002 World cup Nike advert
Featuring Elvis Presley's A little less conversation Not that I'm remotely interested in football but my children loved it and Eric Cantana was so funny. I've just rewatched it on Utube and it brought back such happy memories

Carte D'Or 2001 " He's not your Dad" That excruciating Sunday lunch. I'm starting to identify with the Gran these days.

Well it has to be the flake ad 🤣

You must be a young ‘un Juliet27!
What did you think of it?

I thought it was amazing especially of it’s time.

And this Hahn beer ad too
www.youtube.com/watch?v=0TCgRqKbTIM

I can’t decide between the Diet Coke one or Levi one 🤷🏼‍♀️....
guess I will just need to keep checking

Do you have questions about joint care or joint pain? Ask the panel of expert consultants from Spire Healthcare - £200 voucher to be won

Suggestions for an alternative to HelloFresh Please

This about wine, not food