Michael Mosley - Why I'm a fan of intermittent fasting 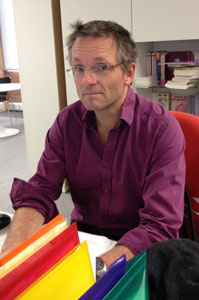 He's the man behind the Fast Diet (aka the 5:2 or intermittent fasting). Here, Michael Mosley tells Gransnet exactly how and why he got into it.

"Intermittent fasting will help you lose weight, which is why many people do it, but it will also help you in a number of other, perhaps unexpected ways.

I personally didn’t take up intermittent fasting to lose weight. I did it because three years ago I went to see my GP and she revealed the results of a recent blood test, which showed that I was a type 2 diabetic. This was a nasty shock as my father, who was a type 2 diabetic, had died in his early 70s from complications of diabetes.

Rather than resort to drugs I scoured the scientific literature for an alternative solution and came across intermittent fasting. I decided to make a film about it for the BBC series Horizon (Eat, Fast, Live Longer) and in the course of doing so came across a lot of new science. I also discovered that intermittent fasting is nothing new. We evolved at a time when food was scarce and the normal situation was one of feast or famine. The reason we respond so well to intermittent fasting may be because it mimics, far more accurately than three meals a day, the environment in which modern humans were shaped.

Professor Mark Mattson of the National Institutes on Ageing and Professor Valter Longo of the University of California’s Longevity Institute are two of the world’s foremost scientists on the science of ageing and how to delay its effects on the body and brain.

I met them in the course of making the film. They have done extensive research into the benefits of intermittent fasting. They recently published a review article in the scientific journal Cell Metabolism, “Fasting: Molecular Mechanisms and Clinical Applications,” which pulled together some of the most recent human and animal studies.

Their conlcusions? Amongst other things, that intermittent fasting “helps reduce obesity, hypertension, asthma, and rheumatoid arthritis. Thus, fasting has the potential to delay aging and help prevent and treat diseases.”

Which sounds pretty much like a win-win to me."

The Fast Diet: Revised & Updated by Dr Michael Mosley & Mimi Spencer is published by Short Books and available online and from all good booksellers.

Disclaimer: Not every diet is right for everyone. Gransnet would urge you to consult your GP before you begin any diet if you're concerned about your weight, have existing health conditions and/or are taking medication.

Lladro figurines and other things people used to buy

Would you go? think I know the answer sadly

What is this obsession with holiday?