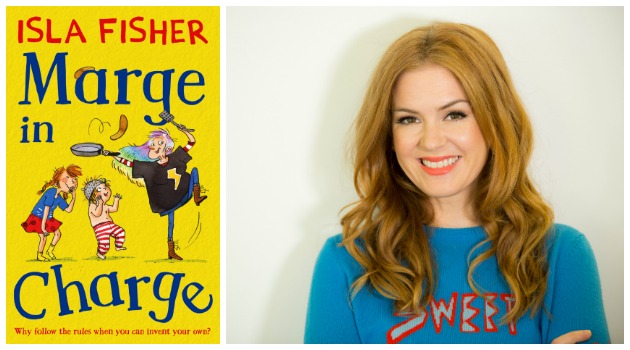 Our kids' book of the month for July is the hilarious, anarchic and charming debut from mother, actress, writer and comedian, Isla Fisher. Marge in Charge is the ideal tale for readers aged 5-8 years old.

Jemima and Jake's new babysitter doesn't look too promising. In fact, she looks very sensible, very old and VERY small (she only comes up to Daddy's armpit!). But the moment their parents leave the house, Marge gives a mischievous wink, takes off her hat and reveals a marvellous mane of rainbow-coloured hair!

Marge really is a babysitter like no other and the children spend a wild evening with her racing snails, slurping chocolate soup and mixing potions in the bath! But if Jake and Jemima want her to babysit again, it's time for them to take charge of Marge, tidy up and settle her down for a little sleep.

Isla Fisher began acting as a child and has worked solidly in television and film for the past 25 years. She also studied in Paris to become a clown for two years before realising that there is not much call for miming 'the wall'! Isla has played many roles over the years, from a bonkers bridesmaid in Wedding Crashers to the poster girl for consumerism in Confessions Of A Shopaholic. But her favourite role has been being a mother to daughters Olive and Elula and son Montgomery. These books are for her children, as a reminder of all the fun they have at bedtime reading books and sharing stories.

Marge in Charge is published by Piccadilly Press and is available online and from all good booksellers.