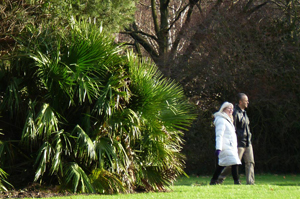 Fan palms have leaves that are evergreen and palmate (fan-like) - as opposed to feather palms, whose the leaves are finely divided, as on coconut trees.

The extraordinary hardy palms Trachycarpus and Chamemerops can lift the spirits by providing an exotic and tropical touch to a garden. They have a strong presence, so you need to plan your design carefully; they're best used either as single specimens or as a group without any other plants to emphasise their lush sub-tropical feel.

If you have the space for a grove of varying sizes of a single species of palms then you can create a a lovely naturalistic effect. These palms look completely out of place in the traditional herbaceous border but can look good as part of an exotic grouping with the right sort of companion plants.

Always best planted into the ground rather than in containers, they can take some exposure to wind, as their leaves and stems are tough. Chaemerops humilis can tolerate more wind exposure than Trachycarpus palms.

This is from Central China and was named after the plant explorer, Robert Fortune. Trachycarpus palms are the hardiest palms in the world and can take temperatures down to -20°C. They can be huge, growing up to 15 metres tall, so site them carefully.

This is an extremely slow-growing European native of the Mediterranean regions and forms beautiful clumps of tall, single-stemmed plants, which can grow up to 3-4 metres in height. They can survive well in a large strong container for many years but will need regular feeding and watering.

The hole should be well prepared for a long growing life and the soil should have sufficient organic matter and good amounts of grit and drainage material to ensure excess water can escape. Happily, these palms like sun and shade so you can put them anywhere in the garden - except in soggy ground, where their roots will rot and the plant will eventually die.

Palms suffer from few pests or diseases, but do need regular feeding and watering. A good nitrogenous feed in spring when growth is just getting underway will help them flourish. Remove any unsightly brown tips and also prune dead leaves to keep them clean and neat. Take the entire dead leaf off right to the base and give it a good neat cut to keep it looking good.

Chaemerops belongs to the native 'Garrigue' landscape of southern Europe and blends most naturally with the drought-tolerant plants from this region. These include grasses such as stipa, shrubs like rosemary, lavender and cistus and perennials such as euphorbias.

Trachycarpus originates from the islands of Chusan in China and looks good with more luscious larger-leaved plants such as jasmines, rhododendrons, plumbagos, ivy and bamboos, which require more moisture and feeding.

Other palms that are less hardy but could be tried in protected spaces are: