The disease of our giants 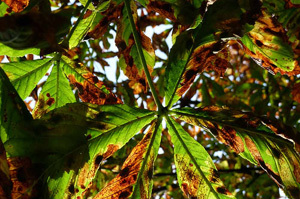 Disease can be catastrophic for plants and trees. It's hard to remember an England covered with 30 million elms and we can only wonder how the loss of these majestic trees has changed the nature of the landscape - as if entire cathedral-like avenues of tree trunks and lovely building blocks of green mass disappeared from the countryside.

Trees have stresses placed on them. Recently there have been recent long periods of drought followed by flooding and a general lowering of the water table in large parts of the UK. This has left trees with reduced energy to protect themselves; they then produce less bark and fewer leaves, making them more susceptible to pests and diseases. Management of these trees includes felling, reduction of the disease host and planting new varieties.

New introductions of these very serious pests are continuous. Some of the diseases have come in on infected nursery stock and wood products.

Some fungi, like Honey Fungus, are dangerous for trees, spreading deep under the bark, forming a network of threads into the soil right through the vascular (water carrying) system and into the heart wood of the plant. Some are actually important for tree nutrition, helping to provide lots of useful nitrogen and phosphorous through a symbiotic relationship with the soil. But these mycorrhizal contracts are also under threat including as a result of changes in the climate and environment.

This is affecting more larches (Larix sp.) at the moment than native UK oaks (Quercus robur). You can see the effect when travelling through Scottish forests. The softer lime green larch growth is now brown and dying and there are large sections of dead larch trees running through mixed forestry populations. The host for the fungus (Phytophthora ramorum) is the terribly invasive Rhododendron ponticum so removing this plant helps manage the infection.

This infection usually kills most Lawson cypress trees that it infects. First recorded in the UK in Scotland in 2010, it is now present in Devon, Yorkshire, Northern Ireland and Republic of Ireland.

This is now securely established in Norfolk and Suffolk on the native ash trees (Fraxinus excelsior). It was introduced on infected imported nursery stock but it was probably due for an appearance from Denmark as it's spread by the wind. Cankers appear on the stems and branches. Leaves fall off the tress early in the season and then twigs and entire branches die back.

There are many bacterial infections, including those that affect apple and pear trees. The most worrying new infection is horse chestnut bleeding canker (Pseudomonas syringae pathovar aesculi), which originates in the Himalayas.

Asian longhorn beetle, a very pretty beetle, is now affecting a patch of trees in Kent and about 1,300 have been felled to try to control it, with strict rules about tree surgery and removal of material. The beetle bores into Acer negundo (Ash leaved maple) and causes extensive damage.

Horse chestnut leaf miner (Cameraria ohridella) - first found in Britain in 2002 in London, its range has expanded to much of England and Wales. It causes a patchy browning on the leaves which then shrivel up and die early in the season. The trees are becoming weakened and now are susceptible to bacterial canker and rots.

What can we do?

Recognise the symptoms and talk to a good tree surgeon if you have any concerns.

You should plant disease-resistant varieties of trees when planning a garden. Resistant varieties include new varieties of Ash from Manchuria (Fraxinus mandshurica) and horse chestnuts from Asia (Aesculus indica and A.turbinata). There is also a new disease resistant Princeton Elm (Ulmus Americana ‘Princeton’) being planted in the UK.

And..don't bring back that lovely specimen sapling you have found on your holiday abroad growing outside your hotel room. The soil or plant might be harbouring a new pathogen.

Struggling but wont tell a soul and nobody knows

Moving away from family