To think that February 14th is SAINT Valentine's Day?

I'd buy that mug!

I usually just make a piece of toast cut into a heart shape for my OH.

St Valentine maybe, but not recognised by the Church, and how many Christians are there nowadays who care one way or the other. It's just another excuse for commercialism and overpriced tat. DH and I don't bother - we show our affection every day. Admittedly it would be nice to get a bunch of daffs, tulips, or better still, a cyclamen, patio rose or similar, but I never get flowers from him (don't remember so much as a single red rose!)

I'm not sure when the 'Saint' was dropped, I certainly remember it being called St Valentine's Day. Sending them to family members???!!!! Surely it is a romantic gesture to someone you love/want to love? Not another excuse for card manufacturers to make more money.

I love my grandsons!!!! Soooo much!

It's about love. send 'em to anyone you love. All makes for a buoyant economy. [smle]

Can't see what the fuss is about. Valentine's day sounds just fine to me. I am glad that there is one less day for us to "celebrate" death by some gruesome means.

DS was born on St Valentines day, I had a lousy day, but got the best present ever!

Not worried about the lack of Saint, but have always felt that Valentine's Day was for wives and lovers - requited or otherwise, and a way to send a message anonymously.

My son once received one when he worked in the local supermarket as a Saturday job. It said 'From a Saturday Shopper'. He discovered who it was and they were together for a couple of years.. I thought that was how it was meant to work!

My ex did the whole bit Big Time, which was wonderful. But I found it faintly disturbing that he did cards, chocs and flowers for his daughter. I put my foot down when he wanted to do the same for my 7 year old daughter.

what's modern about forgetting the point of something very worth while. It's bad enough at CHRISTmas !!

I always sent my father a Valentine's card and, in his own quiet way, he was tickled pink! My mother used to be furious! At her instigation, they never sent each other a birthday or Christmas card - she said they were a waste of money.What I wouldn't give to have him here, still, to send one to!

Have they got a mug Rubylady that says, 'I love you more today than I did yesterday, even though you still get on my nerves'?

phoenix put it near the top of his knicker drawer. Just to be on the safe side.

DH and I always send each other cards but thats all. We sometimes go out for a nice meal. When i was at university nearly 50 yesr ago my room mate had a valentines card from her mum- i thought it very strange. I always think its to do with romantic love!
Howver we did start sendind St patricks day cards so our grandson Patrick even though neither we (or he) are Irish or Catholic. Now i feel i have to find saints days for all the other GCs and send cards so they wont feel left out. It makes my DH cross but DiL says they love getting them so dont know how to stop. When they go to secondary school?

Have always posted Valentine cards to GC with disguised writing & for the last few years was sure I'd be rumbled but - not yet so hopefully this year will be the same. I love discussing with them who they might be from. (Oops grammar?) 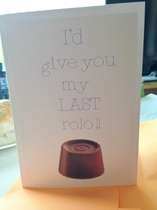 This what what DGS1 got from me this morning !

His mum says he's made a list of potential people who could have sent it !!
(bear in mind it was on his pillow when he woke up but that fact seems to have escaped his notice !)

Good morning all. Hope all is well with you and yours. Yes, it's Valentine’s day again, folks. Pat and I no longer celebrate it very much.. other than a nod to recognize the date. Want to know why? Please read on… Please note that each of my “poyems” comes complete with its own Oxford English health warning. Many perfect vowels and consonants have been ill-treated in the production of this work… for which I make no apology. My writings are specifically aimed at a North-Eastern audience, or at those who have an interest in regional dialect. So criticise the quality of the verse or of the dialogue by all means, but to complain that “it’s not in proper English” is to rather miss the whole point of it… Yes dear reader… that has really happened..
“Ye hev te laugh, man…” :-)

As Valentine’s comes roond again, an’ florists rub thuh’re hands,
An’ Hahllmark cards fly off the shelves, though there are other brands..
Ah’ve looked back at it’s origins, an’ though it seems pedantic,
Ah’m here te tell yez that it’s roots are far from bein’ romantic.
In ancient Rome thuh had a feast, thuh cahlled it Lupercalia,
So strange te us, it’s rites teday would be a total failure.
As men would kill a goat ‘n dog, then take the bloody hide,
An’ whip thuh’re willin’ women, as what it signified,
Was an increase in fertility, an’ te consummate the rite,
Thuh would draw lots fer a partner, with whee thuh’d spend the night.
Then Claudius the Emperor, whee thought his’sel Divine,
Had a Christian executed, whee’s name was Valentine.
In later years the Cath’lic Chorch made Valentine a Saint,
An’ distanced that new Saint’s day from it’s Lupercalian taint.
Original romantic links remained associated,
Though ancient Roman customs were noo happily oot-dated.
As time passed by the cause was aided by wor poets here,
Such as that well-knahn Chaucer, an’ that famous Will Shakespeare.
Romantic verse was popular, an’ in sugar-sweet display,
Hand-made paper cards became love tokens of the day.
The centuries unfolded, an’ in 1913,
With Yankee mass-production the forst Hahllmark cards were seen.
An’ noo it’s ahll big business, an’ wuh hev te take the blame,
As that early Christian feast day will noo nivvah be the same.
Ah suppose there are some pluses, as wor partners get a gift,
An’ a luvly bunch of flooahs gives relationships a lift.
But ah cannat help but thinkin’ in me ain auld-fashioned way,
If yuh’re love is true then what ye’ll do is show that evr’y day.
Ah divvent need a special day te tell that lass o’ mine,
Shuh’s had me heart, reet from the start, me year-roond Valentine…

Will have to take my valentine card for DH into hospital when I go visiting this afternoon, as I had to call an ambulance for him last night. Must remember to take in his card to me (if I can find it) so he can secretly write in it and give it to me. Who said romance is dead!

Synonymous 'even the Catholics' have given up? Ever heard of political correctness? Try typing that again and replace 'the Catholics' with 'the women' or perhaps another group. Then consider whether it is acceptable. 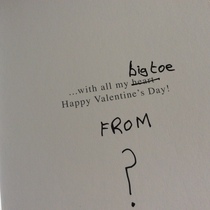 Never heard of sending them to grandchildren I think it's for couples .

Think you're stretching the PC argument a bit thin here. I took the comment to mean that as the Catholic church has always appeared to give more prominence to "the Communion of Saints" than other Christian denominations, the fact that "even they" have given up on St. Val is significant. I took no offence, and I'm a (lapsed) Catholic. Maybe lighten up a bit and don't look for negatives which maybe aren't actually there?.. :-)

The Ministerial code is to be watered down

Does this sound normal? Anyone else?