The battle to save Britain's ancient woodlands

Our glorious woodlands haven't always been protected. In fact, it was once a very different story. For author Derek Niemann, however, the protection of our green spaces is not only necessary for us, but necessary for future generations.

The battle to save Britain's ancient woodlands

"How much was a grove of wild daffodils worth? At the time, it seemed, not much."

Anyone who has stuck a child in wellies and taken them down to their local wood will know that it is the perfect playground for the imagination. A stick becomes a sword, a wand, a light sabre. There are fairies or goblins behind the old oak. There may even be a tiger or two… possibly.

Countless studies have shown that woods are good for all of us; they excite a child and give adults a sense of wellbeing and comfort. We delight in the bluebells, the primroses, the birds within an ancient wood. Woods are good for our heads.

So it’s incredible to think that there was a time, not so long ago, when our oldest woods were disappearing fast. Imagine a government plan to pull down all the churches and cathedrals, irrespective of age, aesthetic value or cultural significance. Something like that happened after the Second World War, when more than a third of Britain’s ancient woods were chopped down. Farmers got an extra field, foresters a new conifer plantation. But what about the dormice and badgers, the oaks and nightingales?

It proved to be a fascinating journey of discovery into how a whole nation could be held in thrall to certain ways of thinking.

Eighteen months ago, I set out to find out how this could have happened. I wanted to bring the statistics to life by talking to the people who cut woods down and the few who fought to save our ancient woods from complete destruction. It proved to be a fascinating journey of discovery into how a whole nation could be held in thrall to certain ways of thinking.

Those coming out of the war were told that the old woods were ‘derelict’, ‘scrub’, ‘unproductive’. They needed to go. Farmers were said to be ‘reclaiming’ woodland for agriculture, even though the land on which many of these woods stood had been forested for thousands of years – it had never been ploughed. Roads – especially motorways – were deliberately driven through woods so that the driver would have an interesting view.

It was heartbreaking to find that many of the people taking woods down did so for laudable reasons. I met kind-hearted farmers who cleared away copses to grow more food because that was what the country wanted. Foresters were driven by the mantra that Britain needed wooden pit props to provide us with coal. What use was a slow-growing oak when a Sitka spruce could grow three times as fast? How much was a grove of wild daffodils worth? At the time, it seemed, not much.

But thankfully we know better now. There are still wonderful woods for us to visit, many of them owned by conservation bodies such as the Woodland Trust, the wildlife trusts and the National Trust. The story of how a few enlightened people managed to change the public mood and persuade those in power that these ancient woods have a value that extends beyond pounds and pence is fascinating in itself.

Not enough of us venture outside, and not enough go to explore the woods. Don your wellies, wrap up warm, and prepare to be uplifted.

Derek's book, A Tale of Trees, is published by Short Books and is available from Amazon.

I often took four of my grandchildren together into our local country park and woods. We were all in Welles and made it into an adventure as we ran(well I plodded) up the hills in the woods and over the streams.So many happy memories.
As they grew older we went Geocaching, they loved it.It's a great activity for out of doors.

We are lucky enough to have many large tracts of ancient woodland within our city boundary. They are our city's green lungs. My favourite is the one that backs onto GS's school is 360 acres, and we walk in it twice a week prior to the school run. You never feel as if you are walking the same paths twice. We have paddled it, climbed it, fired bows and arrows, laid ambushes and built dens in it, collected its acorns, chestnuts and conkers, and sat in the shade of its cathedral giants listening to the birds for three generations. I walked it with my parents when I was growing up, with my children when they were growing up, and with my grandson almost from day one, so we feel properly connected with it and it's hidden histories.

If only the picture were as hopeful as the blog suggests. But they are still being destroyed in the name of progress. My son is fortunate enough to live in the centre of an ancient wood, but all 125 acres are due to be demolished to make way for HS2 in the near future. It breaks my heart to think of those wonderful trees being destroyed forever, along with the wildlife that lives there. All to get from Birmingham to London 20 minutes faster

Love walking through the woods. But here in the Highlands, unless it is a wood belonging to The Woodland Trust, you can suddenly find you are not allowed in and they are harvesting the wood. Afterwards you don't want to go back because it is now like a war zone - no tidying up or removal of stumps is ever done. Then a year or so later it is replanted (just in-between the stumps). After about 4 years it is beginning to look like a wood again. Some of our favourite walks have gone this way. 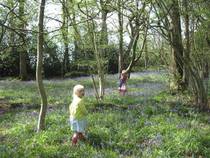 Our two younger granddaughters enjoying the bluebells in our favourite nearby wood. So important to share nature with them.

We overlook a piece of ancient woodland which is protected because of its age. We are currently loving sitting indoors in the warm and watching the yellow leaves shower gently down in the sunshine. And when they are all down, the Black Mountains will be revealed in all their glory.

There are two other woods about 5 minutes in the car away - they belong to Prince Charles. As a known treehugger he will, we hope, take care of it for us all to enjoy.

It's amazing how many woodlands there are up for sale around here. Private ones, of course.

After my husband died we sponsored a piece of woodland in his name through the Woodland Trust. We go there regularly, to grandad's trees.
It is actually part of the Great North Forest, and somewhere we used to go regularly for walks, with and without grandchildren.

I remember being taken to the "bluebell" woods as a child-now a large housing estate.But I am lucky enough to have small areas of woodland around my home and be within easy distance of some beautiful woodlands to visit.I do not know what we were thinking of,destroying so much woodland and hedgerow but at least there are efforts to reverse the decline now.
My 3 grandsons have always loved the outdoors and often visit some glorious woodland.The 8 year old is never happier than when running through the trees,climbing them or up to his knees in a muddy stream.He loves to examine the insects,birds,flowers and the fungi that grow there.I know that my grandchildren would fight to keep these beautiful areas,maybe a bit of their Forest of Dean ancestry has been passed down.
It is so important to preserve what we have left and inspire new generations to protect and add to our woodland heritage.

Why not sponsor a tree? A very different gift.
[email protected]

Obviously not suitable for a very young child
but an outlay of about £35. brings a photograph
of the tree after planting and instructions for
finding it so that one can keep tabs on its
growth.

Or through the Woodland Trust. You can choose the nearest wood to you.

I have a tiny garden, but through the Woodland Trust we have dedicated over 200 trees over the past few years. 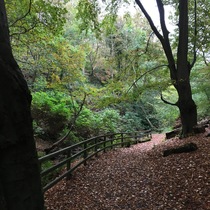 This is one of our local woodland areas. Favourite walk for dog and myself. Balm for the soul!

My GDs nursery school runs what is known as "Forest School" Children are taken into a wood (actually just part of a park)and spend one day a week there. They explore, build dens, have a picnic lunch, play hide and seek, fish in the stream, play Poohsticks. I did it for 6 weeks and loved it. It is such an exciting thing to see almost 4s running around and climbing just being free. They even watch as a fire is built and learn about safety. If you haven't heard of it do check the website. It would be great if more inner city schools could offer this.
www.forestschoolassociation.org/

A very good scheme, trisher. The woods I was talking about in my earlier post has a woodland discovery centre where they host, among other things, activities for schools, giving children a chance to do all the things you have outlined above, and I agree with you about the value of these activities. It seems inconceivable now that, when we were junior school children, we were let loose in the local woods to spend the whole day, sometimes, rampaging around climbing trees, building dens, damming the stream and catching frogs and tadpoles, with a packet of jam sandwiches (or potted meat if you were lucky) and a bottle of water to sustain us. No-one seemed to worry about us, and we always seemed to know what time to go home though none of us had a watch! It has been a good year for chestnuts this year, it seems. We've collected quite a few sizeable ones over the past few weeks, where previously they have been quite small. They are a cookable size, but I like to eat them raw. Probably not good for you

Yes, the DGD's playgroup and school run Forest School - they are lucky enough to have a part of the school grounds where the younger ones can go, it is a small woodland area with stones to sit on, somewhere to picnic etc. The older ones are also taken up into the woods for Forest Days.

I 'bought' each of my DGC a tree when they were tiny; they are in the National Forest.

I not only walk in the local woods but ride mountain not only bikes in the day time but at night too, plus clear the trails & pick up litter. At the moment the Lrch trees are being felled about 40 thousand tons of them around three woods in my area, I have wondered if this is a plane to clear trees for houses, like the farmland is now in my town. What happened to the Green land.

Have larch trees got a disease too?
What a pity, they are so lovely (as are all trees)

Yes, just looked it up - perhaps this is why Nordog

And in other areas too I should imagine.

Allows them to transplant with native broadleaf trees - until they succumb to a different fungus.

Do you do this when washing and ironing?

Nurses and their help with Covid - please be careful!!