What is the oldest date you can find

I haven’t reached the kitchen cupboards yet, but I did clear out the bathroom ones yesterday. I threw away a tube of antiseptic cream which was use before 1997....

Found two bottles of food colouring dated November 1995 and March 1996. Wouldn’t mind, but I even hesitated about putting them in the bin!!! 😆

I use a few drops in my Christmas cakes and threw one out this December that had no date and must have been over 30 years old. I only ditched it because I tested it and found it had given up. It tasted of nothing at all.

I think that I can beat that. I have some cloves that date back to when we first married 51 years ago. I still use one now and again

Was going to say not me, as when we moved in 2016 I chucked away anything more than 2 years out of date.
However the reference to alcohol reminded me that we have a number of bottles of Liquer that were at least 10 years old when we moved to Ripon 20 years ago. They are just too strong for us these days, we've gone soft in our old age.

Erm not quite in my food cupboard but I have an unopened tin of Lyons coffee from WW2. lol. My Mum kept it and when I cleared her house I just kept it. I have now promised it to a museum.

Eazybee, check out the Michael McIntyre sketch on YouTube, brilliant and so true 🤣🤣

Me!
when l was groping around in the cupboard trying to reach the baked beans at the very back!

When we cleared the flat of an old aunt of dh after she died, we found masses of tins, most of which went back many years.
However since none of them were blown or rusty, we took them home and used them all.

The only out-of-date things I’ve had to chuck were 2 large jars of cherries (bought, not home-bottled) among other things passed on by a friend who was clearing her kitchen before moving country.

I was all set to make a clafoutis with them, but when I opened them they were horrible - just a squashy, tasteless mess. I was really looking forward to that clafoutis, too! 🙁

I phoned a friend yesterday - her OH answered the phone and said she was on the other line asking her sister about mung beans. Turns out she'd brought back a lot of tinned food from their holiday home and found this jar of beans. She couldn't remember when she'd bought them but thinks it must have been 50 years ago when they lived in Balham.

Wonderful thread! Thank you. It made me laugh out loud, haven’t done much of that recently. I’m now off to check out my own cupboards, probably have nothing left after I throw out all the out of date food.

Bought a 1Kg pack of Paprika years ago, which I still use.
Just checked the date, Best Before 2/8/2007
I feel it has matured like a great wine!

I went through the pantry a couple of months ago. Found a tin of meat from 2013, which I shoved straight into the bin.

Don't think there is anything older than home-made red currant juice from 2018 there now.

I don't know how long tinned food will keep for. It depends on whether the pantry/cellar is cool, dry, damp etc.

As a child I was taught never to open a tin that was out of shape. If we had opened a buckled tin, never, ever to taste the contents, but to throw them in the bin, as they could cause food poisoning.

I would hesitate to use out of date meat or fish, but I don't know whether vegetables are safer or not.

Baking Powder 2012,had been using it and stuff was fine,but after seeing the date I used it to clean the drain in the kitchen sink. When I poured the boiling water on it,it fizzed a lot so it was probably still OK.

Dried mixed herbs, Oct 2006 - tasted fine in dumplings when no potatoes were available!
Which is more than can be said for the self-raising flour, still in date, but CRAWLING, which had to go in the bin!

rowanflower - I now keep my flour in the fridge after that happened to me.

I recently threw out some tins of chopped tomatoes - I had promised them to a friend who couldn't get any as the supermarket had sold out - but to me shame they were 3 years out of date. I don't even know why I had them in my cupboard as I never use chopped tomatoes! 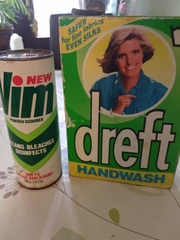 We'll they are not food but are in the kitchen cupboard. One is a box of hand washing powder bought when I used to handwash my baby wollens ( youngest is now 32!). Second is some scourer cleaner that my dad brought home from a cash and carry bulk buy in 1979 . He gave me 12 of them when I married 38 years ago
..... and I still have one left! Admittedly I have used many other products in that time too, I'm not that bad at cleaning ha, ha.

Having had a major clearout for a new kitchen and again for moving house in the last few years, the only out of date item I am aware of keeping is a pack of saffron. I thought it is too expensive to throw out and will only lose some flavour with age.

My best friend moved about 6 years ago. The house she lived in was in very poor repair and some cupboards had not been used for a long time. However when packing to move she found a tin of mandarin oranges with a price ticket of 1 shilling 6and a half pence!! Needless to say it didnt accompany her on the move! I have to confess to a jar of cayenne pepper dated July 1994. It is only used in my Christmas pud recipe....but I will replace it when I can out to the shops again!

I had just heated macaroni cheese for lunch. I used the pot of black pepper and then I saw this site, looked at the date and its use by date was 1999. Ah well, if the virus does not get me my out of date stuff will. Perhaps I should check the rest?

I have an unopened box of sugar cubes with BBF date of 2013, but it goes on to say on the box that “sugar is a natural preservative and if stored in a cool dry place will keep indefinitely.” Sooooo......... it’s gone on the “when we get desperate” shelf!
We have a demijohn of homemade elderberry wine in the garage which came with us to this house in 2011. It had been in the garage at the last house for six years and we never got round to bottling it. We can’t bring ourselves to try it, but somehow I am loathe to tip it down the drain!

I laughed at this post but can't contribute any 'out of dates' as DH has taken to checking everything with a vengeance, even the freezer. I once ate a whole small Christmas pud and tin of custard which i managed to stop reaching the bin. I remind him regularly of that to prove the point. I did miss my frozen homegrown rhubarb tho. Thankfully the crumble topping had survived.

I have a bottle of whiskey, given to me as a leaving present when I left my job in the Midlands and moved to Cornwall in 1989. I moved back to the Midlands last year, and brought it back with me. (I hate whiskey and friends always just wanted wine). I'm not sure it would be fit to drink if I did open it!