What happened to my Cheeky Bagpiper (for Prostate Cancer UK, if anyone remembers) 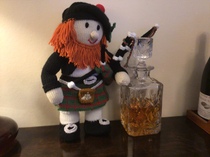 He went to auction on EBay, and a very well-meaning brother who didn’t actually want it, very quickly bid right up to the reserve - which I’d been hoping, but not necessarily expecting to get.

Presumably that put anyone else off, since nobody else made a bid. Since I’d grown rather fond of the CB, I told brother shortly before the end of the auction that if nobody else bid, I was going to keep him, refund his money (having won he was obliged to pay via eBay) and donate the same myself.

However he refused to have the money back, so in the end Prostate Cancer U.K. got double.
Meanwhile my CB looks quite at home on the sideboard, guarding the whisky decanter. 🙂

He looks great there!
I'm glad that you've kept him, he's wonderful

I saw that he’d sold, how funny that your brother got caught out starting a bidding war! Good result for the charity.

A good result all round. It was good of your brother to bid up for it but a pity that put others off.
Just think what fun you can have casually showing this example of your knitting virtuosity to visitors (when finally allowed) and watching their faces when they make the discovery!

@Jane10, I’m already imagining much mirth in the older grandchildren (4 and 5) once they’re finally allowed to visit again!

How many devices do you have in your household?