Good Evening Friesday;
What a day! I thought Sod’s Law had been repealed, but surfaced again today ; Friday the end of the week1 Our external electric hot water storage heater gave up the ghost during the night resulting in no hot water this morning; it had burst after many years of loyal service.
But how’s this for good old fashioned service!
A phone call to a plumber saw him arrive before lunch, an inspection confirming it was a write-off with a new one to be fitted tomorrow morning (I hope!) Taking the old one away too!
Years ago we said we’d change to a gas heater when this one snuffed it, but I was assured that would be easier said than done by neediing a dedicated pipe back to the meter, and longer to install.
My nurse had turned up earlier and said not to worry about not being able to shower as I’m a clean liver; no jogging, no gardening!

But what did occur to me was the possibility of doing laundry in cold water. Cold water detergents exist, but being old school I could never believe they could do a good job.
To my mind hot water, the hotter the better, and detergent is the way to go for de-bugging bed-sheets!

Our Vaccine roll-out prog. is beginning to look like organised chaos,
Ever more Federal and State “experts” getting involved, whllst many individuals and interested groups are now not so keen on having a jab.
Flights of passengers are now beginning to arrive and they are immediately placed in 14
days.quarantine, under police guard!
The first plane to touch down under the new programme, was from Indonesia I think and had 11 passengers!

Last evening’s rail programme on “the world’s busiest stations” was all about our Flindes St. would you believe! The value of these progs is that they can get into places we can’t
It was narrated by Chris Tarrant, but he never appeared on camera like he normally does. Just as if he was watching the video and recording the commentary in another studio.

Hello Rufus. Your hot water will still be up and running. A clean liver eh, what a compliment.
I have had my 1st jab(Pfizer) and I am waiting g for my 2nd.
Sleep well.

Hi Rufus, minimal luck on Dave’s shed, I’m trying (very some may say!). Just had a friend round sitting in the garden, ok when the sun’s out, but the wind is hinting of things to come. Our TV is flipping between Aintree and Augusta at the moment, I have a small flutter on the Grand National tomorrow. I’ll leave you with my thus far result.
Take care 🥂 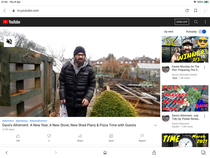 Rufus. Grandad’ shed-still listed in Forums, is this the original?

Hi Rufus2. Sorry for lateness to this thread. I was busy reading my 'Oldie' which arrived today. Something for you to look forward to.
Otherwise, sad to hear about Prince Philip. The TV channels are all doing specials on him.

Granddaughter can’t take a ‘wee in the woods’

How long to settle in a care home