Good Evening Thursday;
Free once again! Apologies for a long delay! Thank you for your messages of concern and it’s nice to know nobody jumped automatically to the conclusion I was doing time!

Quite frankly, I was amused that some women are so proud as to feel demeaned by a 93 years young OAP. Where have they been?
Later on in my cell, it all seemed so sad and pathetic and I emailed GNHQ expressing my opinion, also pointing out that my Aussie Newsletter, no demeaning goes on there, was also being shut down, but to no avail.
However, the real news has been the Super-Soccer League matter!
This carried shades of Packer when he shook up the cricket world to its advantage with innovative with faster one-day games, night cricket, innovative camera work, success with the Indian Premier League etc. etc.
The Super Soccer idea now seems dead in the water, but it prompted me into a bit of research into my favourite my Club, Man City. Did you know it owns nine Man City clubs world-wide?
It’s come quite a long way from when I was a youth when its base was Maine Road and its spectator support centred there. Fast forward to now; from always being the poor relation to Man U. always in the doldrums, all due to money
The EPL has been a revelation of course in terms of skill and excitement and I’m all for that compared to the good old kick- and- rush brand
City won yet again, but we don't talk about Chelsea!.
Perhaps there’s more to come!
Our mass vaccination programmes are still stuttering along! Several mass clinics were opened today to speed the take-up by more elderly groups, but they were underwhelmed by the low numbers.
Believe it or not, the nervous amongst us have been made even more so by the blood-clot news
Being a nation of inveterate gamblers and knowing that the odds against winning $1mill+. jackpots are millions to one they are happy to pour money on the chance they will eventually crack it!
Conversely, when experts say that the chances of copping blood clots are a million to one against, that’s one game they seem reluctant to play!

On a happier note! I hopped in first to explain my recent problem with my external hot-water storage heater bursting and letting water run straight from the mains onto the garden. A nice lass in the Water Board’s trouble shooting dept. said “Oh dear! Hang on a minute, compared the meter reading after the event with past useage and said your next bill, in July, will obviously be much higher, but will show a $100 discount for water not “used”
Thought it best to get in first now rather than wait till the next bill arrives in July.
Hope normal service can be renewed and you can tell me of all the exciting things you are now allowed to get up to particularly during my incarceration!

Winter has returned! temps are 8C below average “for this time of year!” .
OZ/NZ travel bubble open, but had one +ve in NZ and everyone panicked!
Who’d want to be stuck in NZ if they suddenly closed the borders again?
Think I’ll sgn off for now and check whether full posting ability has been restored!
Lots of stuff in my out file for later, even a couple of “non-demeaning” jokes.

They don’t serve wine “inside”!

Good to know that you're OK Rufus2!

Great to hear from you Rufus2- panic over!! You'll have noticed that I was concerned after you'd not posted on Chewsday or Friesday. Not like you. Anyway glad to hear your 'News and Sport' from down under.

Just seen this, good to have you back. Yes the Super league was bug news here. The clubs involved have pulled out now.
Anyway off to do the weekly shop.

Good to see you back Rufus

Must be because I came across a MawBgoodagain on a completely different Forum for Over 50s as a new member!
Probably a coincidence.
Thanks for your good will messages ; the frustrating thing was I could read them, but was blocked from responding.
I can't see any value in these suspension, especially when combined with thread deletions on the whim of some poor soul!
The danger is of course "a young delinquent goes into prison and comes out a hardened demeaner"!

You have to laugh!

As did our Michelle in Bournemouth; she prodded me into raising the "Beige Cardi" issue a couple of years ago which also caused me trouble.
Anyway, I'm looking forward to getting back into the Editor's chair again.
Best Wishes to you both!
Good Health

Jaxjacky Did City field their third team against Chelsea?
I haven't got around to watching it; probably won't ; it makes no difference to finals honours. they've just beaton Villa so watch that instead!

Super League seems to be dead in the water!

Sort of reminiscent of Packer's foray into cricket which doesn't seem to have done any harm; we've still got conventional Test cricket, T20, limited overs, our Sheffield shield (called something else now) and all well-attended prior to Covid
Is your new greenhouse still standing/ Full of ripe tomatoes?
Did You post a pic?

7 long years not days
GrannyLyn65 Gotcha!
I was sentenced to 7 long days; my parody on "Tie a yellow ribbon"
Also "gum tree" instead of "ole oak tree" adds some local flavour!

Being an Oldie I love the Ray Conniff/ Chorus version!
OoRoo

Hi Rufus, pleased you’re back, grass roots football won against the oligarchs and other garchs. Leeds still doing well, Saints another matter! Fancy City having that many clubs, I’d assumed it was unique.
We badly need rain, not an April shower in sight for weeks, about 16deg and sun, so it’s watering duties every day, not from a storage heater! We are eagerly anticipating May 17th when our local will open, a lot of people to catch up with, probably still seated at fixed tables, no standing to chat.
Anyway, must dash.
Take care 🥂

Hi Rufus glad you survived! Lots of welcoming messages , except some who get their k.......s (mustn’t say the word ) in a twist but like a few say no one is compelled to read every word. There seems to me some posters who just like to disagree or comment unfavourably every day.
Cheers🥂🍷🥂🍷🥂🍷🥂🍷

This is a TAAT.

Starting threads to continue defending yourself from what happened on another thread is against the guidelines and it’s pretty unacceptable for others to join in and continue criticising other posters from that thread.

Why bother reading this post then? You know it's Rufus2's one and that his friends are likely to be posting on it.

Agree Averline Why indeed come on here. Rufus has every right to start a thread Suzie
TAAT is a thread about a thread Megs 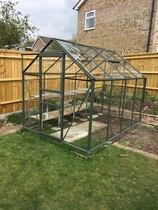 Rufus, our posts crossed..no, greenhouse full of seed trays, with courgettes, squash, pumpkin etc, only been sown a few days,we’ve still been getting frosts, even last night it was just above, 0.9 overnight. Tomato seedlings are in the spare bedroom, with chillies, cucumber and aubergine. No, I don’t think City put out their even second team, just took them a little time to settle. Picture of empty greenhouse attached.
Take care 🥂

Do you have a strategy for one of “those” days? I