Baby! It’s cold outsideI
Released from the lock-up once again,but at least it was warmer than the naughty stool which at this time of year and given our worst weather since 2012 would be a real bum-number!
One thing I came to realise was the extra time available with no distractions emanating from GN.!
My release came about because I able to remind GNHQ that I will be 94 years young next month and I’d been so looking forward to raising a glass or three with my lady friends, especially my friendly, loyal readership of the Newsletter
So I will be coming amongst you shorly taking “drinkies ” orders. Please have your QR Code scanners ready; we don’t want to mess about with pen and paper; don’t be shy or be backward in coming forward. The bar tab will be open so drink up!

I was also able to compile a llist of “dumb-brunette” jokes, amongst others, thanks to GreatNan, but definitely no contravening of “Guidelines” with racist jokes, not even jokey ones!

We are,hopefully, coming out of our 4th lockdown tomorrow, but retaining a variety of restrictions such as gyms remain closed and travel limit will be raised from 10k to 25km.

More idiots are still ignoring Interstate controls and even the trans-Tasman bubble OZ-NZ.
Only one new case in last 24 hours which is promising for further easing of restrictions.
Win d is picking up out there at 10.00pm as forecast. Has been a shocker today; rain followed by more rain; ditto tomorrow.
My friendly Maggies looked totally dreiched at their nest-time and a minimum of 8C will give them a very uncomfortable night, but they’ll survive and be calling round for some brekkie in the morning1
Our Brisbane branch are in for a shock again tomorrow. with only an 18C max forecast!

Susan C. was on the Isle of Skye this week and singing, well humming, really, with a squeeze-box hanging round her neck; “Speed bonny boat over the sea ......”
She’s probably going to have a go on “the pipes” later
We’ve just had two rapid short power cuts, but fortunately didn’t wipe any of this.

Nonetheless I’ll play it safe!
Lovely to be back on air!
Good Health

Welcome back, Rufus! Be good but not boringingly good!!! ?

Be good but not boringingly good!!!
Thank you for that welcome, but I've been warned about the consequences of racist jokes on GN, so no more teasing you with "Scotch"
And what are you on to-day? Doesn't seem "boringingly" to me!
Watch your step!

Just resting, not so good today. At least I can't get in to much trouble, lying down! I dont have the energy to do anything!! Then again, who knows......?

?
Good to see you back Rufus2
Your daily musings from abroad are really interesting to read (supplementing what I never get from DS and family!).
Just steer clear of dodgy jokes, please??

Welcome back into the GN fold, Rufus. We all look forward to celebrating your birthday next month.
Good Health to you. 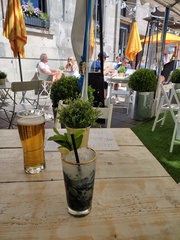 Hellooo! Great to see you back. With all that rain you must be drookit (wet though).
Can I have a cocktail please? I'm not keen on those wee ones that come in a Martini glass. I like long fruity ones with a straw and umbrella if possible.
I'll post a pic taken in miserable wet at St Andrews last Saturday. Mine was the Mojito!
Anyway. You stay safe and stay with us here on GN. It's no fun without you.

Hurrah! We can stop digging the tunnel.
We’ve had sunshine down south for at over a week, but family bbq planned for the 19th, so that’ll put an end to that. Gearing up to watch the Euros in which England will raise hopes and then resume averageness and sink, Scotland look good though. Because of the weather it’s watering time at least every other day, at the allotment and at home, talking of watering, I’d like a Black Russian please Rufus (hope I’m allowed to say that) my favourite cocktail, meanwhile…
Take care ?

long fruity ones with a straw and umbrella if possible
You must be a mate of DelBoy!

I was about to ask which was mine, but that's been decided apparently!
Dug out my boxed set of "Only Fools and Horses" and they are as funny as ever. Nearly choked to death over some crisps

Good to see you back Rufus! Missed your ‘Letter from Australia’! x

Pleased you are paroled ‘Rufus’ ?in time for your birthday too.
If you have been reading the posts in your absence you’ll know you’ve been missed.
My grandson in NSW is touring Western Australia and sending bulletins, my geographical knowledge is zilch but I do know OZis vast and he is only touching a small part, however good to know he is finding out so much .
Still ?for end of lrestrictions finally ? here. June 21st Our Grandson here has July 2nd for wedding (postponed from last year) so all on eggshells.
Hope things are alright with you and restrictions not too restricting, I guess your gym membership is lapsed.
I seem to have missed Wednesday so hope you get this.
Cheers. ????????

PS Are you affected by the mouse invasion we’ve heard about?

The Duchess of Edinburgh! 😍

Telling your adult kids what to do?

To be upset about a lack of response