Hi! Another Sunday; another day of rest!
Muse Thank you for that info and I can now form a mental picture of your locality. Par! I’ve already regaled you with a tale of our romantic association with Par, sitting out the front of Vera’s Aunt and Uncle’s place , holding hands and gazing out over the Bay, not azure blue, but a China clay white! but enough of that!
“Hamlet” conjures up pleasant memories too! I’ve not discovered any of those around Melbourne .

Hellogirl Your mention of Jamaica Inn also evokes memories, but of a less romantic kind.
We lived in Windsor with our two young lads and soon after acquiring our first car (thanks to a loan from Mother-in-Law when I was 31) we took off on an adventurous journey to Par and somehow we finished up for a comfort stop at the Inn.
Suffice it to say, that was an adventure in itself! The toilets stank! You couldn’t write a romantic novel about them!
Vera’s education about the big wide world did widen however because after piling back into car, the lads went into chapter and verse all about it, including how many urinals there were! It was part of their education too, I guess.
No doubt it’s more modern now, or have the traditionalists fought to retain the romantic atmosphere?
Btw We loved the A303

Jaxjacky I’m confused! What’s a “handover reading” At least she knew not to put diesel in; Usually an expensive mistake!
I wasn’t talking about canned Brussels, The frozen ones in a clear plastic bag, so that you can see the quality. They have no extraneous bulky leaves and taste just as good if not better than “New season”
It’s amazing what is now available in the way of frozen vegies. OK, they might cost more per kilo, but come ready prepared and bulk packs can be kept in the freezer between meals.
But what am I thinking, telling you what you already know!

Aveline Not long now! I’m not a cat person either, always had dogs, but I’d also go for the 2 retirees! How would you negotiate taking them “walkies” being on the 4th floor.?
I suppose that’s DH ‘s job during your convalescence! Ian’s will be 6 weeks which seems to be a long time

Can’t remember hearing from Megs lately. Hope they’re having some rest and recuperation somewhere nice after the family wedding!

Covid news still not good. I suppose you’ve seen TV News from various countries, including OZ of crowds of “freedom fighters” rioting. two were caught on camera punching police horses in the face!
Apparently the police have received over 5,000 reports from the public over those incidents, so let’s hope they don’ t receive just a slap on the wrist
Two women have died according to latest stats, one in her 60s and the other only in her 30’s which has caused worries! 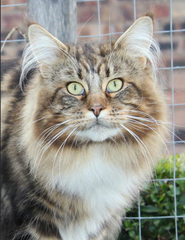 Hi Rufus2 yes I saw those scenes. Looked nasty. It's such a difficult situation to judge. Lockdown has problems but so does opening up completely. Politicians just can't win. But then, neither can us small people

.
I phoned the breeder today and asked if we could have the two retirees. Pics attached. They aren't allowed outside so living in a flat is no problem. Litter tray. DH's job to deal with that (luckily!)
I'm really pleased as it's given me something to look forward to after Tuesday. I'll be trying to recuperate at record speed so we can bring those boys home.

Hi Rufus, I meant I’d checked there was enough fuel in the car before she borrowed it so it wouldn’t be necessary for her to put any in, but she did anyway.
I buy frozen broad beans, because MrJ doesn’t like them and of course peas.
Similar protests in France because of the new requirement for ‘Covid passports’ to enter bars, cinemas, restaurants etc, the gendarmes got the water cannons out and tear gas.
Still a bit damp here, about 19, up to 24 tomorrow, then back down again, more showers due.
Take care 🥂

Evening Rufus just got in after a good day out.
I can see why you are worried about the covid, especially with the young Women.

Hi Rufus, yes a bit flat after the wedding, also not feeling so good these days and despite Freedom not anything to report!
Bad news about Covid in NSW and further. I too saw the protestors on TV, very worryingly, not heard from g.son in Sydney for a while.
A couple of years ago. My son and wife took a house in Fowey for their wedding anniversary , the whole family joined them , some driving there, we took the GW train to Par, tiny country station where we sat and waited to be picked up, lovely trip, lovely area,
Good morning, or should I say Gdday. .
Cheers 🍷🥂🍷🥂🍷

It's only a short trip, enjoy it!

Am I wrong to not spend more time there?