Our Hedgehog house has an occupant!

Thankfully a nice fat Hedgehog, I was afraid we would provide a home for rats over the Winter.
It was an early Christmas gift to DH, I left some straw and leaves next to it and today it is being used, the hedgehog had dragged a large piece of plastic in through its little doorway too, which is odd, but I guess it will help keep it warm. Still putting out food and water until the temperatures drop though.
I feel so chuffed that it’s being used.

I haven't seen a hedgehog for years, now.
This area used to be awash with them.

It would be great to set up a camera in the hedgies house.

How lovely, Mrs Tiggy-Winkle has come to stay for Christmas.
She must be added to your bubble ... 🦔 🎄

I am really thrilled for you.

I love that the intended resident has moved into one of these garden homes! I have had a bird house for years that has stayed completely empty which is a shame. I would love to see a hedgehog staying in my garden but with the amount of foxes, badgers and rats around here I doubt there are any.

How lovely well done I’ve made a pile of twigs and leaves at the bottom of the garden in hopes. I’m jealous! 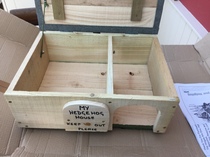 This is it, a desirable, although bijou residence, detatched, no running water.
No neighbours, rural so no buses. Access to fields.

I hope the plastic won't harm it MrsThreadgoode but how lovely that you have a hedgehog using the house. We had 3 hedgehogs using our garden this year, but have no idea where they are hibernating. I'm hoping they have decided to use the leaf pile at the top of the garden.

How wonderful, plenty of cat food for it but no milk.
I had a field mouse nest in my garden and they had lots of plastic in their nest too. Seemed they shredded it for bedding and a bit over the top to keep them dry. Isn’t nature clever.

Our resident hedgehog must be hibernating under the shed. I’m really pleased as the dog goes mad when it is about. It is a lovely large hedgehog 🦔.he/she has been a resident for about 3 or 4yrs.

My daughter has one in her garden. The grandchildren were delighted to see it. Quite magical for little ones to know they are sharing their space.

One of our dogs once picked up the most awful flea infestation..vet in the end blamed our resident hedgehog 🤣

Sadly we don’t have hedgehogs or many birds since our eccentric neighbour started rescuing cats and dogs-at present it’s 5 cats and 3 dogs. We’re all fed up of cat poo everywhere and one of the cats causes endless fights too. Wouldn’t dare leave out cat food for a hedgehog and am thinking hard about bird food too, so sad.

Well done. That's lovely. Thank you for doing this. 🦔🦔🦔

My friend bought a hedgehog house for her husband last Christmas, and they have waited patiently ever since, but no sign of one. I hope you enjoy having its company - wouldn't it be lovely if it has babies and you can watch them grow

I would love hedgehogs in our garden but we have badgers and foxes who visit nightly.
Badgers are the only natural predator of hedgehogs so it's a no no for us sadly.

'Our' hoggie has a shelter between my wall and next door's coal bunker. We know when it's in there - as it snores!

The dog ignores it, though. It must have run into those spikes.

How lovely! Dh put one in amongst some fairly dense evergreen shrubs last year, but I don’t think anyone’s moved in. Hard to check without making a major disturbance, though. We did see what could have been a hedgehog poo on the lawn several months ago, but nothing since.

We’ve recently totally fenced in our garden, so that it’s dog proof , but we left 2 Hedgehog (8 inch) gaps in the gravel boards as we knew the hedgehogs went through on their nightly walks. Last year one nested under the oil tank.
I was tempted to pull the plastic out of the house, but I didn’t want to disturb the sleeping hog, a large part of the plastic is trailing to the outside.
Hoglets would be so exciting.
DD advised us to leave bedding outside the house in a bucket left on its side, so that it could build its own nest, so I just put a layer of straw inside and left some extra plus some dried leaves, apparently they like to do their own decorating!
I guessed it wasn’t a rat or mouse in there as there were no droppings in the entrance.

Can we talk about Stay at Home Mums

The Argy Bargy Bar...the lease has been secured!