Your favourite given names?

I’ve enjoyed the threads on disliked names and what name would you change your own to, so thought I’d start another!

My favourite names first and middle, if I had daughters rather than sons:

Arabella (would I dare?)

Freya. I just love that name. I had 4 girls but I was going to call a boy Jeremy which I liked at the time but since Jeremy Thorpe I became less enthusiastic. I like Isla too and have a great granddaughter called that. One of my grandchildren is called Emily, I like that,too. One of my grandsons is Leif. He hated it until he grew up but now he loves it.

Jocelyn, was the choice for our third child, but he, was not the right sex!
Still love the name though.

Lucia Rose---one of my GGC.

Lesley---one of my D's middle name. Her dad was Leslie.

My Dad’s Christian name was Denyer, most people shorted it to Den and assumed he was a Dennis, my nephew has it as a middle name.

So many pretty names, both for boys and girls. Naming babies is delicious, I remember the stacks of baby name books I had with folded pages for all the ones I liked. I gave both my sons plain names (I like simple one syllable names for boys) but if I’d had a girl I would have gone for frothy and feminine. However the boys names listed here I would have put on my list if I’d thought of them when I was pregnant! 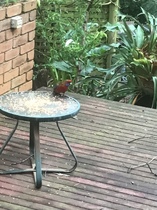 Rosella is a well known brand of soup over here. It is a lovely parrot, crimson and blue . This is a young one in our back yard

nanna8 where do you live? What a pretty bird, the most I get with any colour are robins!

Definitely Alexandra. I don't have daughters or granddaughters, when I suggested it for all of my DGC it was turned down in any case. DGGC perhaps?

Dilly I live in a Melbourne suburb. We are lucky we get quite a lot of lovely birds, especially parrots 🦜

Stephanie & Ruth for me.

My granddaughters are Lily Xanthe and Xenia I love their names. I never liked my name I wanted to be called Heather when I was young.

Heartless Britain - will attitudes ever change?

Is this grounds for divorce?