All in the name of what?

Such awful news from Lahore in Pakistan, Over 70 people killed, 29 of them children, mainly Christian, targeted by an off shoot of the Taliban. I'm haunted by a woman on the news this morning who has lost both her daughters. How devastating.

They must be very proud of themselves these fanatics. What horrible, intolerant times we are living in

Not really sure what!

It's "in aid of" a barbaric ideology that's based on primitive tribalism.

They must be psychopaths. No religion could ever be proud of such desperately cruel behaviour.

Have we got to wait another five hundred years before "they " catch up to civilisation?

Is it meant to wind us up sufficiently to be drawn into direct action against them? Purposeful provocation? Are they just sad gits who can't get anyone to love them or respect them in any way?

Some evil maniac under took a 200 mile journey to stab a peaceful and well loved Muslim shop keeper to death at the week-end. Why? Presumably because he espoused the view that he loved this country and wished to extend a Happy Easter to his Christian neighbours. As Saint (blood all over his hands) Anthony points out, there are a large number of Muslims who live lives not compatible with modern world, although if I remember rightly, one was not allowed to express that point of view on his watch.

Any religion which calls on people to kill and maim others is clearly satanic.

If only they were maniacs, there wouldn't be so many of them!

Sadly they carry out these atrocities with cold reasoning.

Does the Muslim faith call people to kill and maim? So many .muslims say it does not

Its like the old testament 'eye for an eye' stuff. We left that behind centuries ago. I suppose there are old Islamic texts like that too.

A big part of their teachings comes from the Old Testament. Presumably that's why Isis destroyed those beautiful temples in Iraq - there's a commandment somewhere to tear down the places of worship of the idol worshippers.
Our second son visited Pakistan after Uni, he's a committed Christian, and was put in prison for giving away Christian books etc. TG they let him out
quite quickly, we knew nothing about it until he came home and showed us a photo of him behind bars. If he did the same thing now he would probably be lynched.

AB - It's really hard to know, because on one hand we hear from lovely peaceful Muslim people who tell us this violence is contrary to their core religious beliefs. The man in Glasgow who has been murdered belonged to a sect within Islam that preaches peace and wishes to reach out to other religions, I think they would be a minority and are clearly reviled by those who do not wish to get along with their neighbours, the ones who would say that it is their duty to kill the "Kuffir" non Muslims, apostates, stone adulterers, chuck homosexuals off a mountain, which version does the lay person believe. Personally I have no desire to wade through their scriptures, but I understand the Haddith is full of violent directives. A recent article by journalist Yasmin Allibah Brown, herself a Muslim, stated that as many as 30% of young Muslims would not condemn indiscriminate killing of innocent people, so it's very hard to weigh up how Muslims in the west are lined up. Manifestly, at the moment it does not come across as a religion of peace anymore than Christianity did in the Middle ages.

As for Lahore how cowardly indeed to pick on a park with families. Yes it was mainly Christians celebrating Easter but we all know their barbarity does not mean any religion is safe from there murderous hands.

I despair knowing there are people who cannot or do not choose to denounce or condemn terrorists for whatever warped mentality they believe in. What a world.

Good article by Luke Glowacki: How the tribal warfare of our ancestores explains the islamic state. Found on Twitter via Steven Pinker. 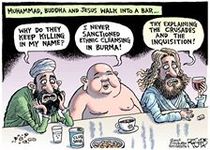 This image is going around on facebook. It is relevant to this whole debate. Bigotry is largely the reason for all this fighting.

Enough with the jubilee already.

Hawthorn in a narrow border of the lawn