This, by Rod Liddle, made me laugh this morning, actually out loud when I got to the bit about biromantic. A list that long just strikes me as a bit silly. Why not just provide welfare services for everybody regardless of their gender 'identity'. It'd sound less complicated even if it isn't.

? Help, I have sexuality umbrella dysfunction
I have just been sent (anonymously) a notice from the Durham University LGBT+ Association, and I am delighted to see that it is an inclusive organisation. Very inclusive.

It exists, it says, to provide “welfare services, campaigns and socials to anyone who identifies as being under the LGBTQ+ umbrella, including but not limited to: those under the trans umbrella, genderqueer, genderfluid, genderflux, agender, pangender, bigender, intergender, non-binary, third-gender, and gender questioning or non-conforming individuals, intersex individuals, lesbian, gay, bisexual, pansexual, polysexual, asexual, grey-asexual, demisexual, homoromantic, panromantic, biromantic [I think that means doing stuff with cheap pens], aromantic and polyamorous individuals”.

It also advises that any questions or concerns should be addressed to Molly in the welfare department.

OK, Molly. I have a question. I am a grey-pansexual (as my pet goat will confirm) genderflux homoromantic, under the trans umbrella. But the bloody umbrella won’t open. I think the catch is stuck. What should I do? ?

I think the answer to his last sentence is "Buy a Pakamac for yourself and a large poly bag for the goat - or retreat to the stable when bad weather is forecast."

Sorry thatbags, straight over my head. I remember when, at a dance, if someone asked you to dance, and you liked them you said ,"okay". Up until then you were dancing with a group of girls, with your skirt up around you knickers. Life was simple.

You was their Elegran. Saturday night was the night, MEMORIES !!

Not sure how dancing came into it but, wotevs

I danced vigorously, Scottish style, for twenty-five years. Unless one already had a partner for a particular dance, or one wanted to sit out to get one's breath back, one danced with whoever asked. Great fun.

At the time of reading I thought that is one of the funniest posts I have read. On reflection I now think it is actually one of the saddest because of it's implications.

Thank you for keeping us informed but think it is best to keep to the dancing - there is real joy in that! 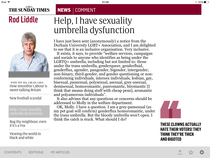 This is for Molly. She has been in touch.

Well it made me smile.

!
I love Rod Liddle's articles - how he gets away with some of the things he writes I don't know.

ps I used to love dancing too. My Dad had a story about when he was a young man and asked a girl to dance. He thought she was attractive until she replied "Ask me mate - Aam sweatin'".