The power of the press

As we are to have another election, let's try not to be swayed by the worst elements in the press. This link shows examples of today's front pages. I'll leave it to you to decide what you think of them.

And remember the press and SKY are owned by a few very rich men who benefit greatly from this country having a Conservative government.

I'm not suggesting who you should vote for just asking that you listen to all candidates and decide for yourself rather than being led by whatever paper or news programmes you watch.

"LibDems welcome chance to return from the dead"

Hmmm Lib Dem/zombies. Yes I can see the likeness

"Crush the Saboteurs" screams the huge headlines on the front of the Daily Mail.

The editor of the Daily Mail, Paul Dacre, was the first newspaper editor to be invited to Downing Street by Theresa May and seems to be writing her script.

Do we really want a country dominated by the poisonous rhetoric of the DM where no-one is allowed to express a different opinion without being called a saboteur who should be crushed?

Th thing that strikes me more an more, is how the media now seems to devote huge amounts of time to the encouragement of large swathes of people to remove themselves form reality and instead "live" in a world of "celebrity", "reality" and endless tweets/facebook etc drivel about a synthetic life removed from others.
That's a bit of a ramble.
I know we always have had celebrities, but they were somehow connected to life and not part of an alternative for many to live in with them.
No wonder younger people don't vote or want to participate as much as they did. They simply don't have the time away from the cyber world.

How true doverrog. The so-called news items on my internet home screen are mostly about 'celebrities' who I've never heard of, health scares and the like with maybe a slur on Trump or May thrown in. Nothing of any import at all.

I assume the national papers are the same, I gave up reading them when they became so biased and extreme to right and left as to be printing completely different facts.

Not all national papers are the same. Try reading the i, which does not support any political party and tries to give a balanced range of views (and they are not obsessed with these so-called "celebs").

Absolutely agree with that, Varian. On a lighter note, it is very reasonable and has great puzzles!

One of the worst things is how some newspapers stir up racial hatred.

I agree that it is frightening and worrying how much influence the (generally) right wing press has. Bloody Murdoch and his phone tapping employees didn't suffer too badly with David Cameron in charge did they? For the sake of fairness, it is not the fact that the vociferous press is right wing that bothers me, it is the fact that they have such an influence on people's thinking, and this would be wrong whichever side of the political field this was coming from. I have made a stand though and cancelled Sky, and when the nice young man from the retention team asked me why I was cancelling, I told him it was because his employer was a crook and I was no longer prepared to put any money in his pocket. Polite titter from him and no more calls from Sky!

I have read the i on the odd occasion and found myself looking for the catch!

Have to agree, but why are people so eaily swayed. Todays generations have had a much better education than many generations in the past. Education taught me to question and reseach my own views, my 14 year old DGD abroad is on an IB syllabus and she has learnt to reseach and debate.

Why do we let these few powerful people have so much influence, and not for the good of most of the population.

Now you might think that would be all about telling us how wonderful the Tories are. Well I'm sure there will be plenty of that but it has to be carefully balanced by not letting the voters think the election is a foregone conclusion. Otherwise they might not bother to vote or worse still go out and vote for other parties.

And so we get this headline (totally contradicting all other polls)

I'm sure no matter how things pan out the readers of the DM will be told in the last week of the campaign that May and Corbyn are neck and neck, to frighten them into doing the "right thing", even if all the other polls show the Tories heading for a landslide.

I actually disagree about current education. Children are taught enough to pass exams. At an ordinary level they seem unable to critically appraise sources. Even Uni educated young people get their news and opinions from Facebook and Twitter. No wonder fake news has prospered. Sigh.

I always read the I. Now and again I have a quick look at the Mail or Express and I'm always shocked by how blatantly they seem to go for the lowest common denominator

I've taught IB in the UK. It certainly does teach more critical thinking, but it's only the minority which studies it.

Interestingly, in France and Austria some of the strongest support for the far-right comes from younger people, which I find worrying.

I guess the older people in those countries experienced the horrors of WW2 and the aftermath and know the benefits which the EU brought. 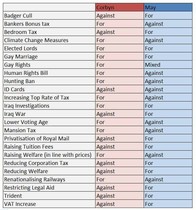 Those are the easy facts Pentstemmon - although the climate change Conservatives, against, is dubious - it's more the sort of 'facts' Varian quoted from the DM.

It is how Corbyn and May actually voted in the House, on Hansard record, so nothing dubious.

Facts are less a reflection of the reality the more they are spun!

And the fact webs are spun thickly and deviously.

Sadly too true! Remember the recent bus ad promising the NHS the money that was going to be saved by leaving EU. Lies,damned lies!