I believe that a society should be judged by how it looks after its weakest members. At the moment the weakest in UK society are
sinking deeper and deeper into poverty. Is this the kind of society we want? We compare very badly with the rest of the developed world. The conservatives say we spend too much on welfare and have to cut back, but look at these figures.

'The reality is the UK welfare state is not large at all. As of 2016, the British welfare state (measured by public social spending) was, at 21.5% of GDP, barely three-quarters of welfare spending in comparably rich countries in Europe – France’s is 31.5% and Denmark’s is 28.7%, for example. The UK welfare state is barely larger than the OECD average (21%), which includes a dozen or so countries such as Mexico, Chile, Turkey and Estonia, which are much poorer and/or have less need for public welfare provision. They have younger populations and stronger extended family networks.

When you cast your vote think carefully about the kind of country you want to live in.

A lot of people in the UK would struggle to keep a roof over their heads without benefits - and i'm not talking just about those who are unemployed! On paper, we are still a 'rich' country, but a huge mismatch between low incomes and basic living costs has been allowed to develop and is the cause of untold misery for many.

we need to go back to calling it Social Security ,its less offensive than the american "welfare" and says what it should mean a safety net for people in need .It will only get worse under the tories so please give athought to the people who would be destitute without the safety net it gives 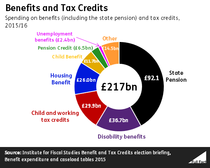 I don't think it really matters what you call it. It's the same thing. Don't forget who gets the biggest slice of the welfare pie.

Is the grass always greener?

Do we need supplements