Don't know if it has made the National News but I just wanted to post some words of praise for all the people involved in the fracking demo in Kirby Misperton. There seem to be quite a few older women there. I wish them every success. It's a lovely part of the country and it is disgusting that this has been allowed.
You can see some photos
www.gazetteherald.co.uk/news/15558940.Farmers_join_anti_fracking_fight/#gallery0

That's only the first one in Yorkshire, trisher.
Have you looked at the Frack Off website?

No I shall look now. Lovely to see the farmers getting involved as well.

It's the edge of the Bowland Shale, which includes the whole of the North York Moors, the Yorkshire Dales and all the way across to Liverpool up to Morecambe.
If they get away with doing that, they will do lots of others as well.
There are likely to be 8 pit heads per square mile.
I'd be down there joining them if I could stand and walk properly.

By the way, do you know anything about Druridge Bay opencast?

So would someone like to explain exactly what their worry is about fracking? The landscape or potential earthquakes? or what?
I am not an apologist for fracking but the actual concerns of the public seem very vague.

At present they are only prospecting to see if any particular site is viable.

My objection is that these sites if shale gas is found is that it would still be using fossil fuels which will potential increase global warming.

I live near the Potteries where much of the area as been mined. A few years ago a large open cast mine was opened on a hillside was visible from the centre of town. After the site had been finished you would never know it had been there.
The question of earthquakes comes up in this debate.
Given that we are not yet fracking this might be of interest.

This link is about the number of uk earthquakes in the last 50 days. did anyone notice them?

www.earthquakes.bgs.ac.uk/earthquakes/recent_uk_events.html
How many know about the Kimmeridge oil fields in Dorset?
en.wikipedia.org/wiki/Kimmeridge_Oil_Field 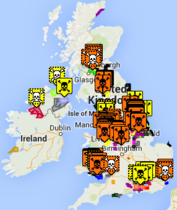 Any fracking near you?

24 people arrested yesterday for wilfully obstructing the highway! Well yes, of course they did.

Another worry to many people is the pollution of water sources by the chemicals used in the fracking process. Many of the areas - in Wales at least - are old mining areas so the same area will get mining again and in the case of South Wales there are many water sources in the same areas.
They were looking at fracking in the area where we last lived - lots of little rivers and streams. We went to several meetings about the proposition and our neighbour asked many awkward questions - eventually she was asked why she was asking all these questions as the company didn't really have answers for her - she told them she had a geography/geology degree and could read an OS map and also all the other maps available. She also pointed out to them that a route they wanted to forge to get equipment to the site was far from the best one but there was an easier and less obtrusive one the other side of the mountain. A few red faced and speechless men!

Interesting link about UK earthquakes. Are you an earthquake watcher?

I was just wondering; don't objectors to fracking in the US claim that it increases earthquake risk?
Or is it that earthquakes have the potential to allow polluted water from the fracking process to enter sources of public drinking water?

We were 'treated' to a charm offensive 3 years ago by INEOS, who have the licence to frack in our area. They arranged a series of public meetings and several exhibition days in village halls etc. to explain their plans, how safe it would be and how the local community would benefit.

Our anti-fracking group picketed the public meetings (more picketers than interested public) and set up stalls outside the various halls offering leaflets and information about the dangers to water supplies etc, Some of the 'antis' were former miners and could explain in detail why the maps showing underground workings were seriously flawed because the mine owners used to covertly extend their operations into adjoining areas, often breaking through into older workings, full of gas and water, with dire consequences for the miners.

Most of the anti-frackers were pretty radical lefties, or Greens but during the course of the campaign we came to realise that we had allies of the NIMBY sort, who were not concerned about the wider environmental issues but simply how it would affect their own property/business/view.

Then the Scottish Government introduced their moratorium on fracking and the campaigning was scaled down. The SG sponsored enquiry is due to report before the end of the year, so both pro and anti campaigns are gearing up again, with rallies and pickets planned for the coming months.

Thanks for the info Granny23 it is interesting to read about the miners and their knowledge. Living in a heavily mined area I think so many people are unaware of the extent of the mines that once covered much of our countryside and our cities, and the effects that this might have on underground working. All the best to you and your group.

For anyone wanting measured and well researched information from the anti fracking perspective I'd recommend this :

Anyone who has bought a house in recent years and looked at plans and maps must know if they live in an ex-mining area that the mining companies still have rights over their land.
There would be no need for that if mines didn't go under it.

Official announcement this morning from Paul Woohouse of the Scottish Government = 'There cannot be and will not be any fracking in Scotland'. Hooray!

We're going to need the fracking-based energy to boost the National Grid to provide the power for the electric cars we'll all be driving.

Why? Some of the American companies that have started fracking have already closed down. It's no long-term solution for replacement.

Oops, I forgot to insert an irony emotional

Very pleased with todays announcement from the Scottish Government,our renewable programme has been going well with over 94% of homes supplied by it last month ...and its not even windy YET.So hopefully we'll continue down that route .My area is on a fault line ,fracking could be a disater for us .The announcement said it wont be allowed on the SNP's watch so we have to make sure they stay on watch as long as needed

Please can we be Scots as well. It really isn't fair that we have to put up with fracking and you have the sense not to. You could annex us or something.

Maybe they can help us by coming over the border and attacking any frackers, trisher, suitably dressed, of course.

Maybe the full and thorough assessment of the risks which was carried out by the SG will be useful evidence for anti frackers elsewhere in the UK?