I was starting to feel a wee but sorry for Michael Gove, falling foul of something he did when he was 30 and not yet into politics. Most annoying all round is that this seems to be yet another of the "look over here, not at the Brexit shambles or the mess the country is in" tactics and we are far too deep in the mire for that sort of nonsense right now.

However, on BBC Politics Today, Mr Gove is being defended by colleagues because a QC has "advised" him he did nothing illegal on his visa application when he went to America. Woah. What? The entry visa question is whether the applicant has ever done anything illegal concerning drugs? So now I'm thinking perhaps we do need to know whether he declared yes or no. I wouldn't give a rat's toss if it was anyone else, but this man as Prime Minister would be trusted with honestly ticking the right box on much weightier issues affecting all our lives. Especially when the Tories do actually get round to remembering Brexit.

Not a huge fan of any of them (to put it mildly) but on the lying toad scale he's probably at the lower end compared to some of the Brexit related whoppers the others have told. I couldn't really give a fig about what he stuck up his nose 20 years ago - far more important things to worry about it in the present.

At least he didn't drink a tin of something fizzy from M and S on his way home.

THATS just the one thing he's admitting to...now he's been found out .Should we expect a long list of misdoings that he hasn't declared(because he had to) ?Honestly we need an election,this is a very undemocratic way of choosing a PM especially when the UK is so divided

Taking coke was the least of his faults.Totaly screwing the education system is probably more important oh and stabbing Boris in the back last time around.

Yes Paddyann, and on that very point....The Sunday Mail newspaper (sister of the Scottish Daily Record and nothing to do with the Daily Mail) had an excellent article on June 2 in which four senior journalists in their 60s and 70s - who were on strike with Mr Gove in 1989 - queried his claims that he was a reluctant participant in the year-long dispute but went along with it because he was the "new kid".

The other journalists in the story are mystified as to why Mr Gove nowadays appears to misrepresent and play down his role in the strike. They say he was enthusiastic and at times played a key role in the dispute at the Aberdeen Press and Journal/Evening Express, which was about union representation.

The story merited two pages in the Sunday Mail and seemed to have involved a lot of research and interviews by political editor John Ferguson.

If I were a friend of Mr Gove, I think I'd be worried someone is raking up his past, but, unlike the cocaine claims, the strike story seems to have grown in importance because of his own previous attempts to shift the narrative, and not from the actual industrial dispute, where all his colleagues remember him as bright, committed and "pulling his weight" in terms of strike action.

If somebody is making huge efforts to stop Mr Gove becoming PM, he would seem to be partially authoring his own demise expecting experienced journalists to keep quiet about real events in which they were deeply and personally involved.

There's a kind of continued arrogance here that is repeated if his current mates are genuinely expecting people won't pursue the truth of what he put on his US visa form regarding use of cocaine.

So now I'm not so sorry for him after all.

My cynical side says that he only 'fessed up' because someone was about to expose him and he thought it better to mention it first with an 'abject apology' to make him look good.
No it doesn't and drugs or no drugs I hope he doesn't become Prime Minister.

An article written by Gove: excerpt

There is a greater sin than hypocrisy. It is the refusal to uphold values because one may oneself have fallen short of them. 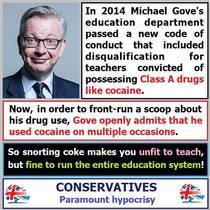 He clearly admitted it because of the biography that's coming out, which refers to it.
His cocaine use isn't the major point is it, its the rank hypocrisy when he was Minister for Education and passed the code of conduct in 2014 that meant any teacher found in possession of a class A drug should be banned from teaching for life.
It's the mess he made of Education, his interference in every aspect of the curriculum with no benefit to children.
It's the mess he made of Education.
It's the fact his party is presiding over the car crash that is Brexit and the destruction of all our public services.

For anyone who didn't see Gove on Marr yesterday and who maybe thinks he is still a candidate for the top job:

^AM: So have you lied about this in the past in order to get into the US?
MG: Err..I don’t think I’ve ever been asked the question.
AM: It’s on the ESTA form - “have you ever taken Class A drugs?”. You will have had to tick Yes or No.
MG: Errr... I can’t remember lying about it to anyone who asked.
AM: Are you concerned that, having now admitted the truth, you might be refused entry to the US in the future [like Nigella]?
MG: Hmmm... well if I was Prime Minister they’d have to let me in, right?^

I don't like the look of him, pasty face, man boobs and a horrible mouth, that's enough to put me off voting for him.
I hope either Esther or Boris get the top job. 3rd choice would be Jeremy Hunt.

<shudder> at any of the above. I'd rather have a coke snorting, pasty faced Tory than any of these hardcore right wingers.

Actually, I'd rather have none of them - but those 3 are truly hideous.

Agree GG54 that Gove is not my choice, but McVey or Johnson? Bloody hell. Did you see her on Marr yesterday?

Reports I have read keep mentioning that he was young when he tried coke, it was a mistake. FGS, it was definitely a mistake but come on, he was around 30 at the time that is certainly not young. As regards the leadership race, not sure I could trust him after what he did to Boris last time.

Paddyann, love the way you talk of the country being so divided at the moment. Isn’t that what you want on a permanent level?

Esther is from my home town. She tells it like it is.

Gove makes me sick - he wrecked the education system on a whim and it is our DGC who will pay the price, as they fill their heads with stuff that is of no use to them, as the teachers around them burn out and as they try to get help for the mental health problems caused by all this and find there is nothing out there.

absolutely but I dont want to have to suffer any worse under tories until we get Independence ,thank you Alima

According to some headlines this morning Gove is now "battling" to remain in the leadership contest.

McVey wants to prorogue parliament in order to secure Brexit

Johnson, as pointed out several times here, is an out and out liar.

Do as I say, not as I do-------motto of all politicians !
This is one horrible man. As I've said before, none of them proved to be any good in their ministerial positions.
C'mon, what have any of them done to change anything for the best ? Answers on a postage stamp !

"It was not only school structures that Gove was driven to reform. He instigated a mad, headlong rush to reform GCSEs, AS and A levels in order to create, in England, a world class qualification system. The experience and expertise of education professionals were almost entirely cast aside in this process and the results are now evident"

I think he’s a snake, but do I like him even less for what I know now?

About his drug taking or record as a minister?

Staying on topic- threads in general

Will NHS Dietician be any help for Vegan 2-3 year old refusing to eat?