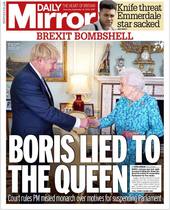 I'm no royalist, but for gods sake. What a tw*t.

Paper is a heap of merde, too.

He was twice sacked for lying, why on earth would we believed that he is any different?

Perhaps those who voted for him have such a low bar that it is part of the course for them. Wouldn’t be surprised.

It ever there was a week when Parliament was required to be sitting then it is this current week. The release of the Yellowhammer documents would have brought this government to be heavily questioned on those documents contents and what a no-deal scenario would really mean for this nation.

However, no such questioning has been allowed to happen as Johnson did not wish to disclose further many aspects of his Brexit shambles. To bring that about Johnson lied to the Monarch in regard to true reasons his government wished to prorogue Parliament.

That stated, I do agree that with the Daily Telegraph suggesting a second referendum would be beneficial in the situation the country now finds itself, perhaps the mood of is now changing.

"To bring that about Johnson lied to the Monarch in regard to true reasons his government wished to prorogue Parliament."
Did he speak personally to HM? Or was it all done by aides on both sides?
I was very surprised when apparently HM agreed at once to such a dodgy request.
Maybe the Scottish court has more information than we have.
I'm not defending Johnson btw.

Fennel in regard to your post @-09:10 today, I believe that it was Jacob Reece Mogg who travelled to Balmoral with several other privy councillors to request that the Queen prorogue Parliament.

However, I also believe the accepted protocol is for the current Prime Minister to make such a request by way of a personal audience with the Monarch.

Perhaps that is why Johnson has been able to claim the HE never lied to the Queen?

Traditionally the monarch always takes her PMs advice and does not get involved in any political controversy. Just imagine the uproar if the PM had been refused suspending parliament, no, far better to go with the traditional line and let him take any flak for getting it wrong.

He's an expert at weaseling his way out of problems.
But hopefully, not quite clever enough.
However if I was a betting person I would put money on the Supreme Court exonerating him on Tuesday, and saying the prorogation was lawful.

For the third time in a week, the newspapers and tv are featuring photo opportunity pictures of the PM meeting a group of primary school children,

We are in an unprecedented national crisis and he has prorogued parliament, he claims, not to avoid scrutiny, but to concentrate on the domestic agenda before a Queen's speech (nothing to do with brexit).

There is also the little matter of negotiating a brilliant new withdrawal deal with the EU, and since Amber Rudd and Michel Barnier have both told us he's hardly started on that, you might think he ought to be giving it some serious attention.

So what's he doing with all these primary school children? I. haven't actually spotted him kissing any babies yet so surely he can't be electioneering ?????

I'm surprised by the Queen having been taken-in by him ?

The Prime Minister has to have a formal meeting with the Queen if he/she wishes to prorogue Parliament, I think the Queen's right to say 'no' is very limited, or it is possible she has no right at all.

Both sides have a bevy of constitutional lawyers who advise on these situations.

He sent JRM to meet the Queen to talk about proroguing parliament.

Talking to school children? He's showing off his knowledge of Latin.

" I. haven't actually spotted him kissing any babies yet so surely he can't be electioneering "
Varian [grin}
Reminds me of a passage in the Pickwick Papers - "He's kissing a baby - He's kissing them all!"
Or something like that.

He used the visit to a free school to promote the school. Apparently, the Queen's Speech is about to make it even easier to open a free school.

Wow! Aren't we all soooo impressed Johnson knows Latin!! I was watching an interview he did and he said "Donnez-moi un break" in the middle of it. Apart from being pretentious, does he honestly think that a bit of franglais will impress anyone?

Not any easier to open free schools in Scotland. Thankfully, they don't exist here. Our academies were based on Senior Secondaries (ie post 11 plus) and the term is now often used for comprehensives.

Shortage of medicines all over Europe - a big concern

Sometimes I am ashamed

Shuggie Bain to be televised.