Piers Morgan in The Mail today

I do hope my heading is a clear indication of what I wish to discuss?

I never thought I'd see the day but he has said some pretty sensible things. like this...

It's looking more and more evident that Britain has got this horribly wrong from start to finish, and I suspect that's one of the reasons why some people continue to defy government advice on vital things like social distancing – they just don't believe what they're being told

Of course we could have done things differently and of course people have different opinions. No matter what the decision was, someone would have disagreed and thought they had a better idea. They might be right.

But the fact is that, no matter what action was/is taken, it ain't gonna work unless we all actually do it.

Why "don't they believe what they're being told"? Social distancing is happening all over the world, apart from Sweden and it remains to be seen whether or not they've made the right decision.

Why would anyone take the risk of becoming infected and infecting their loved ones because the don't believe what they're being told?

I don’t think having got things wrong in the first place is an excuse to not believe anything else. People can use their own brains to work it out, surely? We could all see what was coming, if we chose to look, and my Dh and I were being wary of where we went etc before it was official advice. My book group also moved online before the guidelines were issued.

To me, refusing to follow the advice now is cutting off your nose to spite your face.

I think that a lot of younger people have heard that 80% of people only have a mild or no illness at all especially younger people and have decided to take the risk for themselves but aren't thinking of others.

I suspect that what Morgan is indicating is that there is a big lack of belief or trust in the government.

I think the poll that suggest 63% want a unity government bears that out.

I felt that I just wanted somebody to tell me what to do.

I didn't want to see the PM defer to experts. By all means do it, but do it away from the cameras.

Tbh I’m glad he did defer to experts, as I find listening to a liar very difficult.

As ever he is talking up his fundament.

I find listening to some so-called experts equally difficult !
Especially when I trained in barrier nursing before some of them were born.

Aah the world according to Piers.....

Piers Morgan is an opportunist who has made a living out of being a big mouthed idiot. It’s made him a very wealthy idiot. Every country is trying to work things out as best they can. So many qualified and unqualified experts all insisting they know best and wanting their five minutes of fame. It just muddies the water.

No doubt there will eventually be an international enquiry to try and establish best practice as countries are using different methods of obtaining data and (lies, lies and) statistics but even then politics will come into play.

The trouble is that we were all told, during the Brexit campaign, that experts were some sort of 'elite', as though that meant that they were untrustworthy, rather than people with specialist knowledge. We were told to despise those who were 'telling us what to do' as opposed to pointing out how that knowledge impacts on our lives. Everyone was suddenly 'entitled to an opinion', regardless of whether or not they had a clue what they're talking about.

Now that we are in trouble (which was inevitable when knowledge was devalued) suddenly we are supposed to 'follow the science' and 'follow the guidelines'.

Is it any wonder that people are confused?

He always stirs things up. 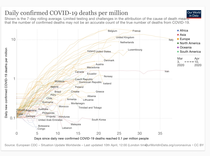 What is the "more and more evident" that he refers to? Please quote some of the "evidence" that Britain has got it all wrong. Seems to me we're on a rough par with other European nations.

So have they got it all wrong as well?

Piers is just being Piers

Here in the US we have been bombarded by "experts" often offering totally conflicting information. Political parties put everything into a partisan spin, medical groups were either ultra-cautious or wanting to take a measured approach. Initially, this was mainly going to be a problem for the elderly, so all the rest made up there own rules as they went along....until they began dying too. Finally, all the countries
seem to be getting on the same page and the public is
beginning to comply. In the final analysis, I believe in erring on the side of caution, common sense, and lots of hand washing!

Toys We Yearned For.

A winter of very expensive heating and little food?