The following is an excerpt from Marina Hyde's latest column which made me laugh out loud.

Much more diverting is all the drama concerning Dilyn the dog, who is reportedly being used by Islington blogger Dominic Cummings “to fight a proxy war against the PM’s fiancee”. I can’t believe that a) a nation run like this has the highest death toll in Europe and b) Dominic has time for briefings, having by now surely been snapped up by one of the big Silicon Valley companies.

And yet I read that Cummings reportedly holds a grudge against the Jack Russell cross, after it humped his leg at a No 10 away day. There is more – much more. The dog is said to have caused expensive damage to Chequers antiques, while according to the Mail “one visitor claims to have seen Dilyn ‘mount’ a stool made from the foot of an elephant shot by US president Teddy Roosevelt”. Take a moment – I know I did.

In the Downing Street garden, Dilyn is said to have cocked his leg on some spad’s handbag. “Dilyn is a much-put-upon animal who in a non-Covid world would have had his balls chopped off long ago,” a No 10 aide explained to the Sunday Times. “It’s not his fault that he is a bit exuberant.” Right. Are we still talking about the dog?

And that was when it hit me. Maybe we’re NOT still talking about the dog at all. In a very literal, very metaphorical sense – stay with this – is it possible that Boris Johnson’s old larrikin spirit has transferred itself into Dilyn the dog?

Let’s look at the evidence. We have a prime minister who suddenly appears vaguely housebroken. Meanwhile, we have a sexually incontinent dog who will fuck anything – even a trophy pouffe, or Dominic Cummings – and who is being extensively briefed against by factions unhappy with his performance. It’s surely the classic bodyswap comedy: “When he ingests a plot device, a struggling UK prime minister ends up in the body of his own resourceful and appealing rescue dog – and vice versa!”

Think about it. It’s literally (and metaphorically) the only explanation that makes sense. That wild thing you see in the photographs, dragging Johnson round his daily Buckingham Palace runs, is actually Johnson himself. It was Johnson who pissed on the lady’s handbag – huge Bullingdon Club energy, let’s face it – and it was Johnson who wrecked the Chequers furniture and had it off with an elephant foot. The creature behind the lectern who’s been trained to say “data not dates” for a chocolate drop is actually Dilyn.

Look, I don’t know the trailer line for a paranormal state of affairs that’s going to have to divert me till June. “Becoming a dog made him a man.” “Can you teach an old prime minister new tricks?” But I do know that these types of movie transformation are always the route to self-examination, radical self-discovery and significantly deeper empathy – which is certainly the other one-way journey the prime minister should be currently embarking upon.

Marina Hyde is a Guardian columnist

I think it is all true! Johnson has become Dilyn.

That had me laughing when I read it in my Guardian this morning, rather than my usual smile at her articles.

Dilyn is running the country. There is a lot of lean steak and bones being ordered instead of vaccine.

Team Dilyn all the way.

Dilyn kept his balls while BJ has lost his.

MaizieD ? There's a whole follow through on that which could be potentially libellous I fear!

So who has become Larry?

Ellianne I saw a lovely photo of Larry today having a belly rub from the policeman on duty.

Oh come on! Larry is a cat. Nobody can take over a cat...

Marina Hyde is brilliant.
I realised reading MaizieD’s statement that nobody could take over a cat, that a Jack Russell’s are similar to cats in that they do exactly as the please. They’re murderous where rodents are concerned but only because they want to be. 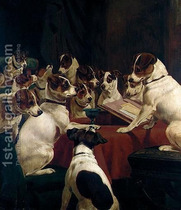 When you take on a rescue dog they can have such issues.

I’ve had rescues for over 40 years. Never had one that couldn’t be house trained. Dylan was a puppy, usually much easier than an older dog

ExD: There seems to be a certain type of "celeb" dog owner who enjoys boasting about their inability to house train their dogs.

Exactly Deedaa, the ‘no one can train my dog, I’ve tried everything’ approach.

Fabulous. She’s a brilliant writer. Can you imagine Cummings’ face ???

Why are we paying so much for energy when profits are so high?