Watching the D Day anniversary on television, and feel so emotive and full of pride for what our parents achieved in those terrible days.

They helped lay the foundations for 75 years of peace in Europe and that success and sacrifice must never be squandered.

In my case my grandparents, but I totally agree with you whitewave .

I found myself in tears watching those veterans on the stage such proud men and women. I can’t even imagine what everyone went through during those war years serving men and women or civilians.

My father was in the RAF and served most of the war in India. My mother was directed to work in the Post Office in Plymouth which suffered tremendously in the Blitz.

An uncle was a POW in Japan and suffered dreadfully. He was ove4 6 ft in height and was 6 st when finally released.

I agree WW it’s very emotional, but a wonderful D Day commemoration.My Father was in the RN during the war and survived a sinking, but he had so many nightmares.

My father was in Burma. He ended up very ill with Septicaemia in the famoue Deolali hospital in India. He was one of those who didn't talk about his war service. He would never buy a Japanese car. 😐

A relative of mine was killed during WWI when his ship was torpedoed by a German sub. off the coast of Genoa. It was the SS Transylvania and nearly 300 were drowned. He was in the RAMC and his name is on a list in our local town hall. He's in a cemetery in France---aged 21.
Another relative is buried in Canberra. Many others are buried in different parts of this country----all from WWI.

The war graves in Canberra are a sight to behold and the memory of the place of thousands of graves stays with you.
The commemoration this morning was very moving, especially showing the " old soldiers " in their 90's, bless them.

My Grandad was in Egypt in WW1, my dad was in the army and my mum was in the London Fire Brigade in the Blitz. My DH’s father was one of the boffins who developed radar with Watson- Watt in WW2

The bravery of our parents is something I am so very proud of, they were both left emotionally damaged, but tried so hard to protect us. Please God our grandchildren never have to suffer the same terrible times, but the way the world is at the moment it’s a frightening prospect. Grandmashe43

My parents were married October 1939 one month after war was declared. Dad was called up and Mum didn’t see him then for 4 years.

my Grannies sent 7 sons to war 2 didn't come back and the rest all had life changing injuries or conditions .None of them talked about it,my dad if asked used to say it was the ones who hadn't actually been involved who loved to talk over everyone about their "experiences"One of my uncles never saw his son who was born after he left for war and died aged 9 months , a cot death.My aunt had uncles photograph added to one of her and baby ,they never had anymore because of an injury he got in the desert.My dad was in the navy ,he and mum married the year before the war ended while he was on a 48 hour leave she wore a blue suit and the ceremony was in the manse .

Respect and Gratitude to all who have given up their lives and limbs for us. God bless their wives and families.

Watching the veterans this morning was so moving. My dad signed up at 15 and was in the RN, he didn't talk about what he experienced or saw but I do believe he probably suffered to some extent with PTSD. My ex FIL was a navigator on Lancaster bombers and was one of those who did return.
We owe so much to all the young men and women who fought for our freedom. I feel so very proud of them all.

My Dad volunteered for the RNVR after the tragic news of the sinking of ~HMS Hood off Denmark in 1941. Almost all on board were killed. This was very near home for us.
I've just found out that he was involved in the D-Day invasion. His ship was one of the communication vessels anchored off Gold Beach. He never told us about this, but he did say that he was involved in accepting and transmitting messages. sometimes in code.
Previously his ship was a supporting vessel in the Italian campaign.
I'm so proud of him- I've got all his medals which prove he was there.

My father trained to be a fighter pilot before war broke out. I have a letter that he wrote to his mother in the day war broke out in which he said that she was not to worry about him as he had had the proper training whereas he thought that newer pilots would not get the same training.

He flew spitfires and hurricanes during The Battle of Britain. My mother used to visit pilots who had been badly burned and who did not want their families to visit them and see the injuries.

His medals were in a box under the bed but my husband thought that was wrong so we had them mounted on air force blue card and added a little photo and brass plaque.

Watching those wonderful veterans made me feel proud and humble. Yes, it did make me think of my parents. Dad was in the thick of things and Mum worked at Woolwich Arsenal. Dad never spoke of his time in the war but did wear his Royal Artillery tie with pride. As the Queen said, thank you. 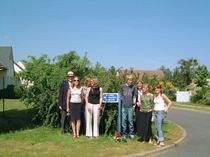 A pic of one of the streets/squares in Normandy honouring my father in law.
Although wounded he survived to win his Légion d’Honneur avec Palme .
Commanding No 4 Commando, and one of of many brave brave men 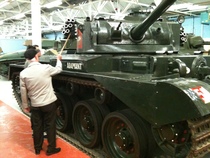 My dad was at Dunkirk and escaped on one of the troop carriers - his pal was ahead of him in the line waiting to get on but they wouldn't let Dad on so he got off again. True comradeship. Dad didn't talk about the war (he'd served in Africa and Italy too) but in his later years did tell my youngest son a lot of what had happened to him. Sadly he developed AZ and couldn't remember any of it before he died - maybe a good thing.

My FIL was a tank commander and went into France the day after D Day. Before he passed away my husband and two sons took him to Bovington tank museum where he enthralled all around him with stories of how things were in various battles he'd been in. He was even leaning in with his stick and moving the exhibits around to where they should have been

. The staff thought he was wonderful and gave them their lunch free of charge. Memories my husband and his grandsons will cherish forever. He went to Korea at the end of the war and served there too.

We had the honour of visiting the Normandy Juno beach where Canadians so bravely fought. It was a very moving experience.

Both of my parents were in occupied territory. My mother in Jersey which suffered horribly with lack of supplies, and my father in Brittany.

Such brave young men and women.

Yes indeed. I asked mum if the war had spoiled her youth and she said that, "Yes, it did really" but rarely elaborated on it.
I think dad was at D-Day but he didn't talk about it. When he was injured by shrapnel he was in hospital for two weeks.
He kept the shrapnel in the box with his medals and would say, "This put me hospital and it probably saved my life." The rest of his company went to Japan and few came back. He always said he had a lucky war but what they went through was beyond imagination.
He liked to watch All Our Yesterdays and was disappointed when it was cancelled. He felt that his generation was forgotten.

It's so very true that those involved in both World Wars spoke little of their service. I learnt recently that my father went into France at the very start of WW2 but I don't know anything else of what he did.

My FIL served in the RAF from 1925 until the 1960's so he went the full course of the war, flying as an engineer. My MIL's brother went MIA in a plane over N Africa and no trace has ever been found of him or his crew.

Another uncle was held as a POW by the Japanese. We didn't know until his funeral that his first wife was also held and in fact gave birth to their child under horrendous conditions whilst in a concentration camp.

The Queen was right today to say that her generation is resilient.

My father was 19 and a signalman on the Russian convoys.
I had no idea as he never ever spoke about it. I was in my 30s when a family member told me.
I read up on the subject and was horrified at what he went through.
I don't know if his experience made him the man he was, frightened of nobody or nothing.

WW2 covered so many nations and years that most men of that generation ( and women) took part in it.

My father was a Commando. He never said a word in our hearing about the war. When he died we found all his medals. Norway, Africa, Dunkirk. We treasure those medals.

Thank you all for sharing the photographs and stories, I think their generation was a different breed of people, but I'd like to think we would all rise to the occasion if there ever were the need -- and I agree it's an emotional subject- My father in-law was in the Navy and fought in the Pacific Theater, his ship was hit, he sustained injuries and lost 3 of his fingers, spent several months in the hospital- He's gone now, but I've saved several things of his to honor his service to the world when at war-

Why would any family with children have a dog like this??

How to remove someone's things from my garage

🌏 Wordling around the World, for all who love to Wordle.🌏

Any experience of cults or strict churches ?

Husband, old before his time!!