The advantages of hearing aids 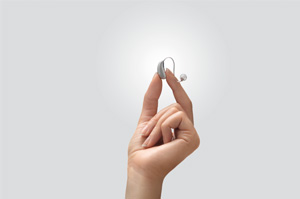 There's often a hint of denial attached the gradual loss of hearing that many older people experience, but with the right help (and today's technology) there's no substitute for having the problem properly addressed. We hear from gransnetter Irenelily on the difference finally being fitted with hearing aids made to her life.

About four and a half years ago, I noticed that my hearing was not as acute as it had been. My youngest daughter pointed out that I was frequently saying “pardon” and asking the young grandchildren to repeat things. I realised I needed to get something done and hated the idea, as it made me feel old and dispirited. My GP sent me to see an NHS audiologist, who gave me one 'open ear' hearing aid. Not much help! Six frustrating months later, I decided to go private, despite being worried about the cost.

I tried the hearing centre at one high street retailer but they were more interested in a sale than my problem. Then I saw a Specsavers advertisement online (two for the price of one). I made an appointment and met up with a sympathetic audiologist who pointed out that hearing aids were just similar to spectacles in that they often remedy something which is part of ageing! He explained that nothing is as good as one’s natural hearing, but two aids would mirror that as closely as possible.

"A bonus is that if I don’t like my husband’s choice of television programme, I can remove the hearing aids and read or sew without a background of war or cowboys!"

There was a range of prices, but no sales pressure. I was able to try out some aids by walking round the town wearing them! Since retiring from teaching I have been a school governor and I had been finding hearing everything in meetings and listening to the children quite difficult. Family events and social situations were frustrating. The TV and telephone had also become a problem.

I am now on my second set of hearing aids and have the reassurance that I can go back to the audiologist at any time, for help and advice (for free!). What seemed a big problem at first, has become routine - worries about removing them at night, remembering them in the morning, looking after them - have faded. They are part of my life and I don’t notice that I’m wearing them now - apart from being able to hear!

I am once more confident in social situations, shopping is easier and I have no problems in meetings. I have taken on another term of office at governors, now being Vice Chair and Chair of one of the Committees. A bonus is that if I don’t like my husband’s choice of television programme, I can remove the hearing aids and read or sew without a background of war or cowboys!

4 LETTERS - Does a sentence make 3

Why Did the UK Have Such a Bad Covid-19 Epidemic?

Well now I ve got a dilemma