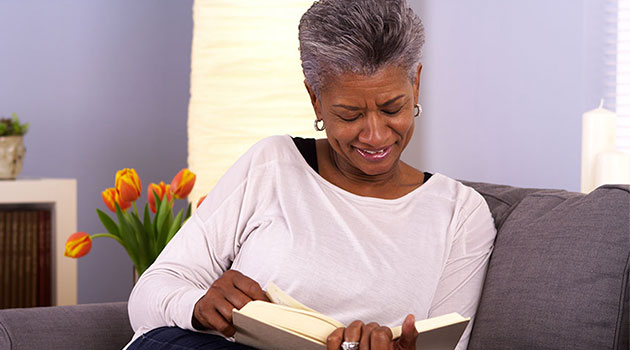 This Christmas give the gift of stories. We want to help take the stress out of Christmas, which is why we’ve teamed up with HarperCollins to select a range of novels perfect for everyone in your life. From delicious Christmas stocking fillers from Cecelia Ahern and Tracy Chevalier, to gorgeous hardbacks from the bestselling author of The Binding and Susan Lewis, we’ve got the perfect book for everyone this festive season.

Get our top threads delivered straight to your inbox...

This page is sponsored by: 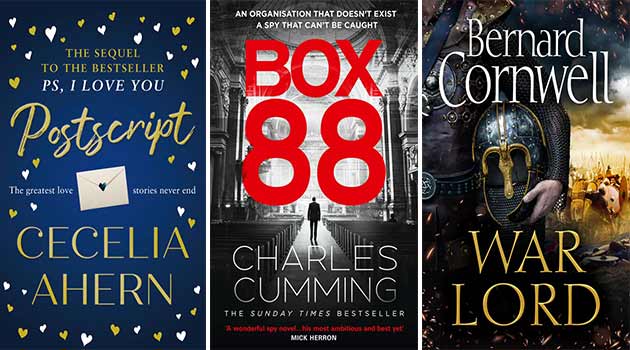 The long-awaited sequel to the international bestseller PS, I Love You.

The PS, I Love You Club. These are the six words written on a card handed to Holly Kennedy. They’re words that are engraved on her heart – because PS, I Love You is how her husband, Gerry, signed his last letters to her, letters that mark a year she will never forget. Now, the mysterious club wants something from her.

And if Holly can find the courage to meet them, she’ll learn what it really means to live life to the full. Because every love story has one last thing to say…

Years ago, a spy was born…

1989: The Cold War will soon be over, but for BOX 88, a top secret spying agency, the espionage game is heating up. Lachlan Kite, recruited from an elite boarding school, is sent to France, tasked with gathering intelligence on an enigmatic Iranian businessman implicated in the Lockerbie bombing. But what Kite uncovers is more terrifying than anyone expected…

Now he faces the deadliest decision of his life…

2020: MI5 hear rumours of BOX 88’s existence and go after Kite – but Iranian intelligence have got to him first. Taken captive and brutally tortured, Kite has a choice: reveal the truth about what happened in France thirty years earlier – or watch his family die. In a battle unlike anything he has faced before, Kite must use all his skills to stay alive.

After years fighting to reclaim his rightful home, Uhtred of Bebbanburg has returned to Northumbria. With his loyal band of warriors and a new woman by his side, his household is secure – yet Uhtred is far from safe. Beyond the walls of his impregnable fortress, a battle for power rages.

To the south, King Æthelstan has unified the three kingdoms of Wessex, Mercia and East Anglia – and now eyes a bigger prize. To the north, King Constantine and other Scottish and Irish leaders seek to extend their borders and expand their dominion.

Caught in the eye of the storm is Uhtred. Threatened and bribed by all sides, he faces an impossible choice: stay out of the struggle, risking his freedom, or throw himself into the cauldron of war and the most terrible battle Britain has ever experienced. Only fate can decide the outcome.

The epic story of how England was made concludes in War Lord, the magnificent finale to the Last Kingdom series. 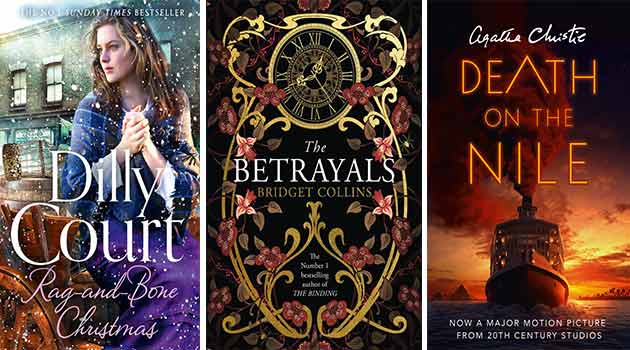 Paradise Row, London. December 1865. Snow is falling fast and Sally Suggs is working tirelessly to bring in enough money to keep bread on the table. Her father, a skilled rag-and-bone man, has fallen ill and now Sally has taken up his trade.

But this is a man’s world and competition is fierce, and Sally’s rival Finn Kelly always seems to be one step ahead. Her family’s one valuable possession is their horse, Flower, yet with no one to protect them, London’s underbelly of black-market traders circle closer.

From the No.1 bestselling author of The Binding comes a captivating new novel. This sumptuous hardback, with gold foiling and patterned endpapers, will make a stunning gift for all book-lovers.

At Montverre, an exclusive academy tucked away in the mountains, the best and brightest are trained for excellence in the grand jeu: an arcane and mysterious contest. Léo Martin was once a student there, but lost his passion for the grand jeu following a violent tragedy. Now he returns in disgrace, exiled to his old place of learning with his political career in tatters.

Montverre has changed since he studied there, even allowing a woman, Claire Dryden, to serve in the grand jeu’s highest office of Magister Ludi. When Léo first sees Claire he senses an odd connection with her, though he’s sure they have never met before.

Both Léo and Claire have built their lives on lies. And as the legendary Midsummer Game, the climax of the year, draws closer, secrets are whispering in the walls…

Death on the Nile - Agatha Christie

Agatha Christie’s most exotic murder mystery, reissued with a striking new cover to tie in with the highly anticipated 2020 film adaptation.

The tranquillity of a cruise along the Nile is shattered by the discovery that Linnet Ridgeway has been shot through the head. She was young, stylish and beautiful, a girl who had everything – until she lost her life.

Hercule Poirot recalls an earlier outburst by a fellow passenger: ‘I’d like to put my dear little pistol against her head and just press the trigger.’ Yet in this exotic setting’ nothing is ever quite what it seems… 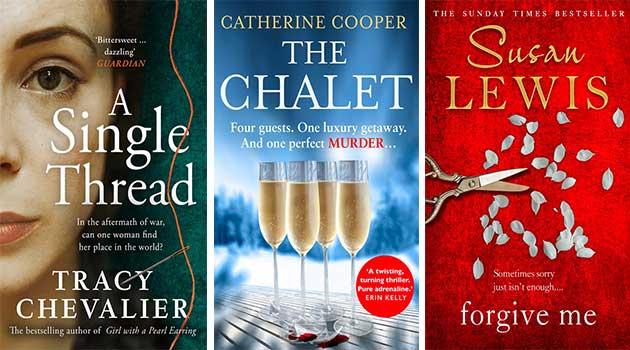 From the global bestselling author of Girl with a Pearl Earring.

Violet is 38. The First World War took everything from her. Her brother, her fiancé – and her future. She is now considered a ‘surplus woman’. But Violet is also fiercely independent and determined. Escaping her suffocating mother, she moves to Winchester to start a new life –a change that will require courage, resilience and acts of quiet rebellion. And when whispers of another world war surface, she must live with a secret that could change everything…

French Alps, 1998. Two young men ski into a blizzard… but only one returns.

20 years later. Four people connected to the missing man find themselves in that same resort. Each has a secret. Two may have blood on their hands. One is a killer-in-waiting. Someone knows what really happened that day. And somebody will pay.

An exciting new debut for anyone who loves Ruth Ware, Lucy Foley, and C.L. Taylor.

Tense, emotional and gripping, Susan Lewis’s latest novel is a spellbinding story of love, family, and the price of forgiveness.

"I can’t forgive myself. Not after what I did. Could you?"

This is Claudia Winters’s last chance for a fresh start. Changing her name and leaving her old life behind, she has fled to the small town of Kesterly with her mother and daughter. Here, she hopes they can be safe for the first time in years.

But the past can’t stay hidden forever. And even as Claudia makes new friends and builds a new life, she can’t help feeling it’s all about to catch up with her… Until one disastrous night changes everything forever. 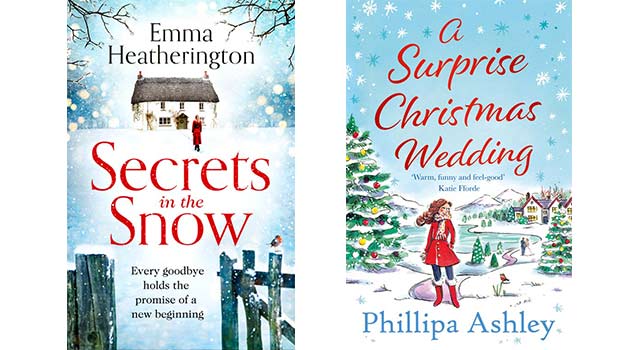 Secrets in the Snow - Emma Heatherington

As the winter snow falls on the small Irish village of Ballybray, Roisin O’Connor and her young son, Ben, are saying goodbye to their beloved neighbour Mabel Murphy. Mabel lived a bold and colourful life, but the arrival of her brooding nephew, ‘blow-in’ Aidan Murphy, just makes life more complicated for Roisin.

However, in one final act of love, a message arrives from Mabel that changes everything. And as winter turns to spring and the cold snow melts, the secrets both Roisin and Aidan are hiding must be revealed at last…

Curl up with this gorgeous story about love and second chances, perfect for fans of Trisha Ashley and Milly Johnson.

It’s been a year since Lottie’s fiancé walked out, leaving her heartbroken. But things start to look up when she lands her dream job at a beautiful Lake District estate, with a handsome groundskeeper for a neighbour. So when Lottie is asked to organise a last minute Christmas wedding at Firholme, she can’t wait to get started. Until she meets the couple, and discovers that Connor, the man who broke her heart, is the groom-to-be.

As snow falls on the hills, can Lottie put aside her past to organise the perfect winter wedding? And will there be any festive magic left to bring Lottie the perfect Christmas she deserves? 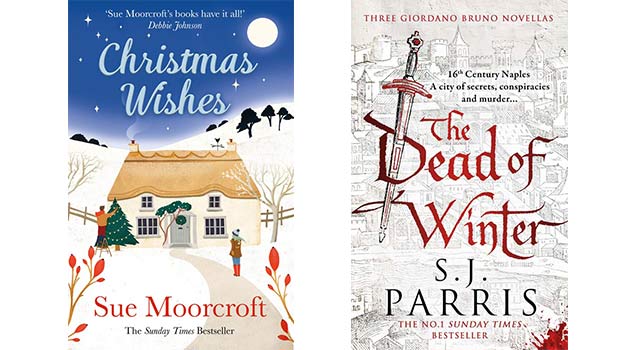 A sparkling Christmas read from the Sunday Times bestseller – perfect to snuggle up with this winter!

Hannah and Nico are meant to be together. But fate is keeping them apart…

As soon as Hannah bumps into her brother Rob’s best friend Nico in Stockholm, the two rekindle a fast friendship. But Hannah has a boyfriend – and Nico has two children to look after.

When Hannah loses her beloved shop in Stockholm, though, she is forced to move back to the little village of Middledip – only to find Nico has just moved in too. Under the same snowy sky, can the childhood friends make a romance work – or are there too many obstacles standing in their way?

The Dead of Winter - S.J. Parris

Return to the origins of master spy Giordano Bruno in three gripping tales from No.1 bestseller S. J. Parris.

During the summer of 1566, a girl’s body is found within the walls of a Neapolitan monastery. Novice monk Giordano Bruno has a habit of asking difficult questions, but this time his investigations may lose him his place in the Dominican Order – or deliver him into the hands of the Inquisition.

The Academy of Secrets
An invitation arrives from a secret society of enlightened philosophers, led by the eccentric Don Giambattista della Porta. Bruno is captivated – even more so when he meets della Porta’s beautiful niece. But keeping these new heretical secrets soon becomes a matter of life or death…

A Christmas Requiem
When Giordano Bruno is told the pope wants to see him, he fears he may be walking into a trap. The pope is intrigued by Bruno’s talent for complex memory games, but Rome is a den of intrigue, trickery and blood, and Bruno will be lucky to escape the Eternal City alive.


Click here to buy any of the books featured on this page.

Win every book featured on this page - NOW CLOSED

Simply fill in the form and answer the question below by 11am 14 December for the chance to win one of three book bundles from HarperCollins, each worth £160.

Get our newsletter for the latest competitions, exclusive discounts, top threads and more - sign up below

Feeling horrible after a 'near miss'

Loving the common thread so much thought we should go “POSH”

Elizabeth I may have been non-binary, claims Shakespeare’s Globe