How to have a hygge(lig) Scandinavian Christmas 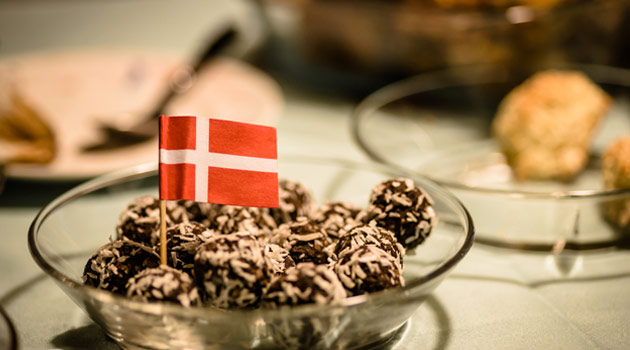 Ever wondered what it is about Scandinavian Christmas homes that make them look so cosy? You guessed it, it's the Danish sensation of 'hygge'. Hygge and Christmas go hand in hand (or should we say glove in glove, brr it's cold up there) and it's a recipe for a cosy Christmas that the Danes are happy to share with us. With coronavirus restrictions meaning that most of us are spending more time at home - and some of us looking at a fairly lonely Christmas - this is the perfect time to make your space as inviting and comforting as possible.

So, if you're curious about how to Scandi up your mulled wine or decorate your home in a Nordic style, here's our guide to a Scandinavian Christmas.

Sign up to get our top threads delivered straight to your inbox...

What is Christmas hygge?

Hygge (pronounced hoo-guh) is a Danish word for feeling an extraordinary level of cosiness. It is also a lifestyle trend about noticing and appreciating the little things: what people do for you and what you do for them. It is putting thought into making moments cosy - and hygge at Christmas is all that and much, much more. One of the best reasons to take time to hygge - and why the Danes are consistently voted the happiest nation of people - is that hygge forces you to stop and enjoy the moment. It is the unapologetic emphasis on doing what makes you happy - and doing it a lot. Whether you like to cuddle on the sofa with a film or treat yourself to a phone call with a friend and a hot chocolate, to hygge is entirely subjective and personal. One person's nightmare might be another's heaven. What is generally agreed though, is the need for cosiness - achieved by creating special moments of me-time (or you-and-me-time). 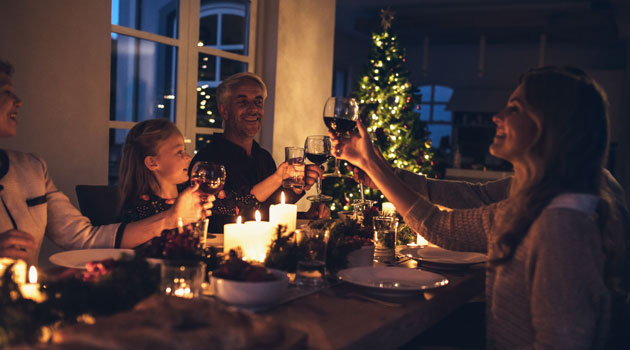 To hygge is to stay warm

The weather in Denmark is cold and clammy or icy and windy during winter and therefore to feel happy - to hygge - is to stay warm at all times. One of the ways in which you can achieve this is by having blankets everywhere throughout the house - the kitchen, living room, garden - and if you're heading out, by bringing one with you. The Danes love to wrap up in a big blanket and enjoy a quick cup of coffee outside - for bonus points, bring a warm, freshly baked cinnamon swirl. 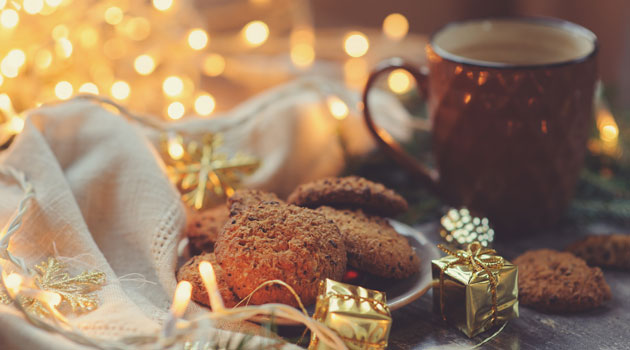 To hygge is to eat well

Danes love good food - wholesome, homemade, great-tasting food - and the Scandinavian Christmas is full of delicious culinary traditions. As a way to slow down the moment, eating and drinking is an important part of hygge and plays a big role in every Christmas celebration during the season. 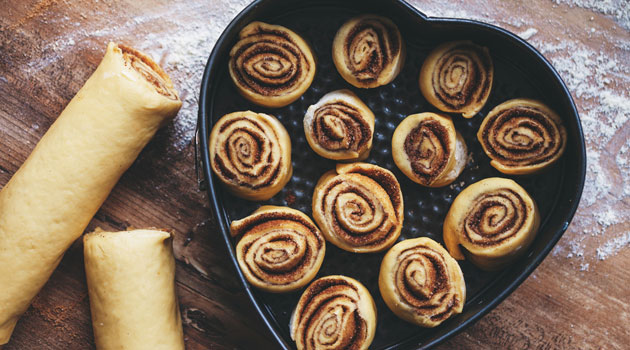 The Scandinavian Christmas kitchen smells of cloves, cardamom, bay leaves, aniseed, butter, caramelised sugar, sweet wine and cinnamon. Rolls of enriched dough is filled with cinnamon, sugar and butter and sliced to make the popular cinnamon rolls. Water is boiled with cloves, oranges, aniseed and ginger to create the mulled wine essence to be mixed with red wine and brandy. Duck and goose are filled with apples and prunes and slow roasted in the oven and served with caramelised pearl potatoes.

Hygge, however, is not about grand meals and expensive treats, but rather about appreciating what you have, making the most of it and, finally, talking to others about how hygge(lig) it is.

Tip: If you want to do Scandinavian Christmas like a pro, in the days following Christmas Eve, the Scandinavians have a series of 'lunches' that involve never-ending meals of pickled herring, pressed meats and different kinds of rye bread - and many, many glasses of schnaps (spiced and herby liqueurs made with angelica, star anise, nutmeg, anise, ginger, laurel, cinnamon, dill or a variety of berries). 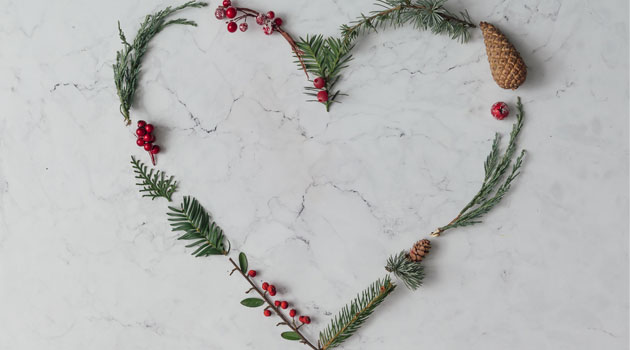 Tip. If you want to do Scandinavian Christmas like a pro, make your own heart-shaped ornaments from anything you can find such as metal, wood, string and cardboard. By layering different types of paper (newspaper, old wrapping paper, magazines) you can achieve the rustic look that the Scandinavians love.

Decorating for Christmas in Scandinavia is all about aesthetics - creating zones or areas in your home that look inviting. By combining various textures - metal, textile, paper, wood, felt and ribbon - Scandinavian Christmas decorations look both modern and traditional at the same time. As long as you stick with earthy colours (cream, white, grey, sand), primary and complimentary Christmas colours (red, blue, green) you will achieve a harmonious look. These displays of decorations can seem messy if the surrounding areas are not tidy, so it is a good idea to give the house a proper cleanout before you decorate.

The bringing of nature into the home at winter time is very important in Scandinavia, both as a way of protecting it from the freezing temperatures, but also as a celebration of life. Greenery in particular is central to Scandinavian Christmas traditions and a good place to start when you are introducing hygge into the home. Homemade wreaths and winter bouquets are popular ways of using natural decorations and adding those earthy colours and textures. 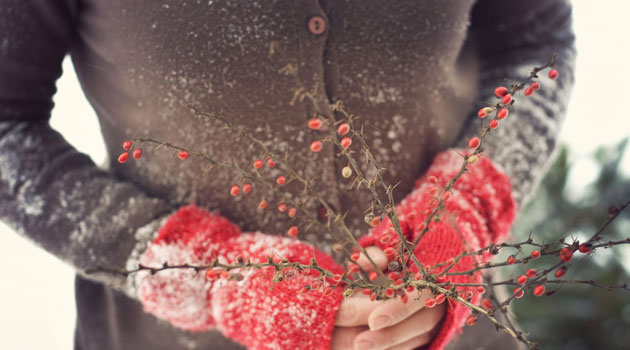 How to make a Scandinavian Christmas wreath

To make your own basic Scandinavian wreath you need straw, wire and spruce. Unless you're lucky (or organised enough) to have access to the real deal, compressed straw can often be found in DIY stores. The wire needs to be strong, but thin and flexible - and you will need roughly 40 metres (less if you've done it before). Wrap the wire tightly around a handful of straw a few times. Then add a second handful of straw, slightly overlapping the first, and tie with wire. Don't worry about bending your wreath at this stage. Continue until your straw wreath is roughly one foot long and no more than 10cm in diameter. Gradually start to bend the wreath as you go along and join the two ends together by adding a final handful of straw. Go over the wreath once more, wrapping the wire around very firmly - you need a nice compressed base.

To add the spruce, layer each piece on top of the wreath - remember to make sure that the needles face the same way, so that it looks nice and neat. Stuff the ends of the branches inside the previous ones to hide the thicker bits. Secure the spruce with the wire, wrapping in between smaller pieces to create a natural look. To decorate use other types of greenery, winter berries, cones, ribbons or christmas decorations on wire. 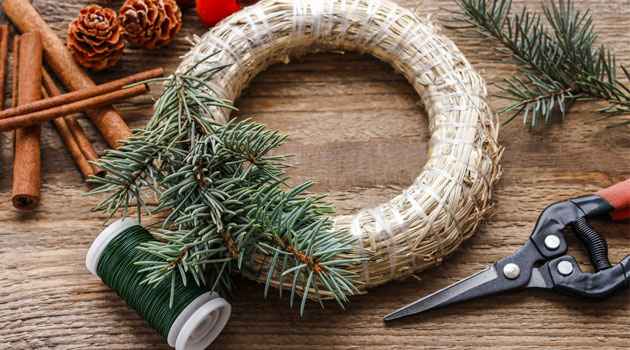 Scandinavian Christmas trees need to be as fresh as possible, it is not brought into the home and decorated until a few days before Christmas. 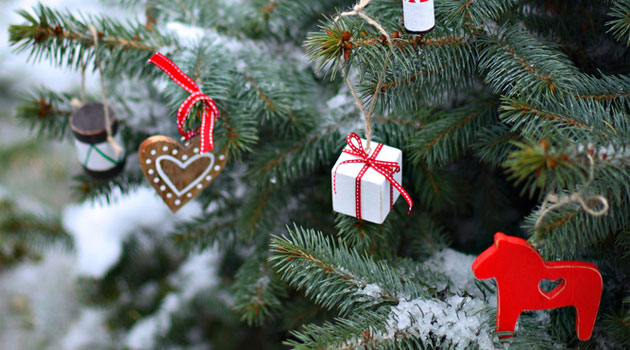 Tip. If you want to do Scandinavian Christmas like a pro, after their Christmas dinner, the Danes dance around the tree and sing seasonal songs and hymns - sometimes for as long as an hour!

Gløgg, or mulled wine as we know it is extremely popular in the Nordic countries during the festive season. Similar to the German Glühwein, it is a much stronger alternative to the version we drink. Spices are boiled in water with orange and sugar to form a syrupy base, which is then mixed with red wine and brandy. Often people will also add kirsch or other preferred spirits to give it an extra kick. Commonly in recipes, raisins and flaked almonds are soaked in the wine before adding to the mixture. 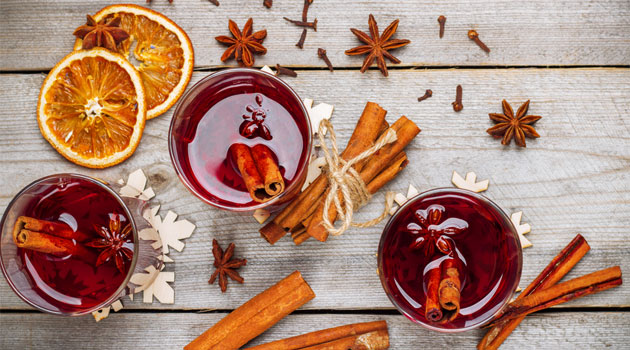 Lucia buns and other treats

The Scandinavian Christmas kitchen, perhaps best known for its cardamom, cinnamon and clove spiced breads and cakes, is very busy throughout the month of December. Many of the treats made for the festive season differ slightly from county to country, but are based on the same recipes or stories of origin. Of these, brown cookies (brunkager), Saffron Lucia buns (lussebulle), ebelskive pancakes (æbleskiver) and honey hearts (honninghjerter) are some of the most popular. 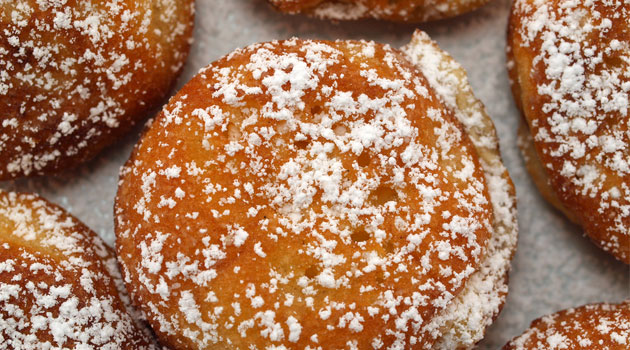 On the 13th December, the Scandinavians celebrate a day known as Lucia's Day. The story goes that during the night, Saint Lucia would bring food to Christians hiding in catacombs, lighting the way by wearing a candle lit wreath on her head. Throughout Scandinavia, in schools, libraries and the streets, young girls dressed in white walk in parades with lit candles and sing. At the front, a single girl - the Lucia bride - wears a wreath with four lit candles and leads the way. The song they sing is about bringing the light forward and giving joy. Similar to celebrations of Winter Solstice, the shortest day of the year, this day is often described as a festival of light. 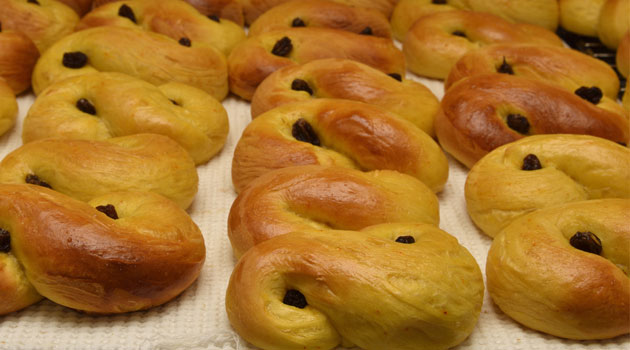 Tip. If you want to do Scandinavian Christmas like a pro, gløgg is very, very strong and filled with sultanas and flaked almonds. It's so strong that Scandinavians use spoons to drink this popular tipple...

Contrary to popular belief, not all Scandinavian styles are minimalist. In fact, much design work coming from these countries is quite 'messy'. Complex narratives or abstract designs (as seen in iittala and Marimekko for example) contradict this perception of the Scandinavian style. At Christmas, these designs are utilised in decorations for their magical and fairytale-like qualities.

The darkening days affect moods, creating feelings of isolation and as a result, Christmas lights in Scandinavia are about lighting up the streets. Households in cities and provincial areas put up outdoor lights, not just to decorate their house, but to spread the light and hygge in the neighbourhood.

One of the easiest ways to create a little hygge is to light candles. Rather than a mere romantic gesture, the lighting of candles for a Scandinavian Christmas is about generating heat and light in the darkness. 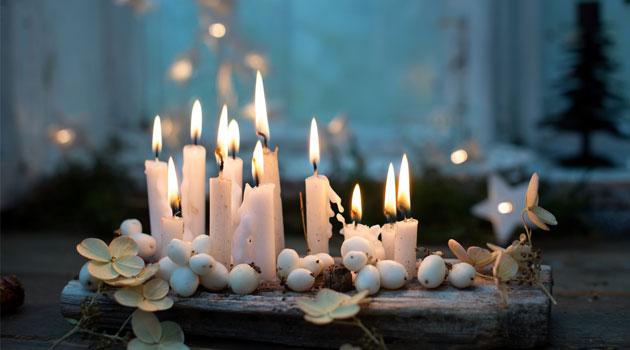 Tip. If you want to do Scandinavian Christmas like a pro, the Scandinavians have dedicated 'calendar candles' which count down the days until Christmas Eve. 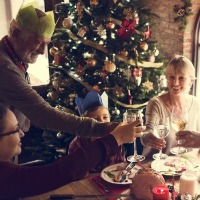 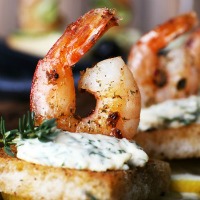 Quick question about the 'rules'.

Moving house with a cat

How often do your adult children call?